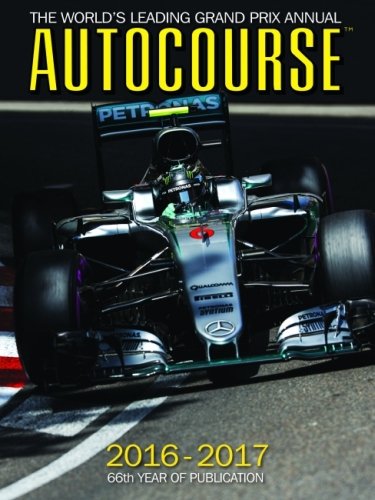 The months it takes for “The World’s Leading Grand Prix Annual” to wend its way from England to US mailboxes after publication can be tense ones. Now in its 66th year the primary focus is, as usual, on the FIA Formula 1 World Championship. Even though there is a distinct lack of competition these days in the annual GP arena, the book—now also available in digital form—is an authoritative record of its time and thus essential.

Auto Course, as it was then known, was first published as a quarterly in 1951. It billed itself as “The International Quarterly Review on Motor Racing.” It was initially published in four languages: English, German (Die Dreimonatliche Internationale Zeitschrift für Automobilrennen), French (Revue Internationale Trimestrielle des Courses d’Automobiles), and Italian (Rivista Internazionale Trimestrale di Corse Automobilistiche). However, after several years the multilingual approach was dropped, although later there would be separate editions in these languages when it became an annual. At one point, now Autocourse, it was a bimonthly, with the original publisher at one point giving way to a new one, Trafalgar Press, which also had Sporting Motorist in its stable, and the publication schedule became a bit haphazard towards the end of the 1950s. In 1959, only a single issue was produced; in 1960, only two issues of a planned four were able to see the light of day. 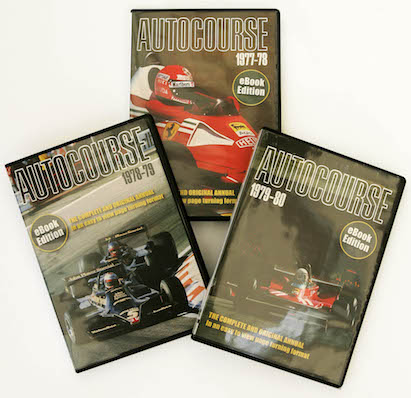 With the 1961/62 edition, Autosport, now the “Review of International Motor Sport,” officially became an annual. Over its first decade, Autocourse had morphed somewhat in its coverage. In the early years, although it certainly provided coverage of those events that were part of the CSI World Championship of Drivers, it also gave considerable attention to the other major events of the day, ranging from sports car races and various formula car events to the annual 500 mile race at Indianapolis. Whenever possible, it provided the individual lap times for each lap of each car in the races counting towards the world championship—a practice that finally ended with the 1969 edition. However, other races received this treatment as well, at least for a time.

Before its official debut as an annual with the 1961 edition, Autocourse was already a World Championship-centric publication, those Grands Prix that formed the series hogging the bulk of the pages in each issue. This focus was not so incidentally tied to the rise of British fortunes in the Grand Prix world: first, with drivers such as Mike Hawthorn and Stirling Moss, and then with constructors such as Vanwall and Cooper. The appearance of the annual and the traditions of having the world champion write the foreword (Jim Clark in 1963)* and the editor select the year’s Top Ten (1966, Jim Clark as the inaugural Number One) and the detailed reports of the world championship events were among the features and, of course, the race reports and information that quickly made it required reading among the British racing fans—along with more than a few Americans and others it should be noted. Although it would take some time before the annual would be published within literally weeks after the end of the world championship season—several editions in the latter part of the 1960s were not issued until almost the end of the next season, by the 1970s Autocourse was well established as part of the annual Christmas wish lists for countless racing fans.

In 1963, there was a change of publishers—Autocourse Publications interestingly enough, followed by another change hard on its heels just a year later with the 1964 issue. From the 1964 through 2004 editions, publishers Haymarket and then Hazelton would publish Autocourse, with Crash Media doing so from 2005–08. The current publisher, Icon Publishing, became in 2009 the seventh custodian.

The 1961 edition of Autocourse had a total of 216 pages, of which 115 were devoted to GP racing, five of which covering the 500 mile race at Indianapolis. In addition: the sports car championship received 35 pages, the European Touring Championship 33 pages, Grand Touring Cups four pages, non-championship formula one events six pages, Intercontinental and Formula Libre four, Formula Junior four pages, and non-championship sports & GT events a single page. There was also a six-page article on racing wedged into the issue.

There were eight events in the World Championship for Drivers in 1961: Monaco (Monte Carlo); the Netherlands (Zandvoort); Belgium (Spa-Francorchamps); France – actually the Grand Prix de l’Automobile Club de France (Reims); Britain (Aintree); Germany & European Grand Prix (Nűrburgring); Italy (Monza); and the United States (Watkins Glen). Each race report included: the entries for the event; the times and weather for each practice session that set the starting grid and any non-qualifiers; the results; and, a lap chart for the race with the time for each car on each lap being recorded. This was a feature that began with the very first issue and—despite the occasional hiccup—finally ended only with the 1971 edition. Beginning in 1969, Autocourse began adding the chassis numbers of the cars to its race information.

The 2016 edition of Autocourse has a whopping total of 408 pages. Over 300 (!) of them are devoted to material directly related the Formula 1 World Championship. The other sections are reviews of: GP2; GP3; Formula V8 3.5; Formula 3; Formula E; Sports & GT events; touring cars; US racing scene; and, a compilation of worldwide major events. All these reviews are crammed into the back of the issue with only that covering the US scene getting more than a few pages, twenty in the case, versus maybe typically only four pages or even the dozen for sports cars, for the review.

I must admit that it has been many years since I have paid all that much attention to the F1 World Championship. After the original world championship that had its first season in 1950 ended with the 1980 season (its official title was the World Championship for Drivers or the Championnat du Monde des Conducteurs, never the “Formula 1 World Championship”) thanks to the many pitched battles that were waged between the FIA Men in Blazers and Bernie Ecclestone and his supporters in the Formula One Constructors Association (FOCA) (an often farcical affair dubbed by some wits as the “FIASCO War”)—with Enzo Ferrari falling in with the FIA and not the FOCA, there was a new championship created that was owned lock, stock, and barrel by the FIA—the current Formula 1 World Championship which came into being with the 1981 season.

By around 1984 my interest had waned significantly. However, I continued to purchase Autocourse each year, less and less thanks to any real interest in F1 but more and more as a matter of habit. More often than not, an issue would arrive, get a quick glance, and then be relegated to gathering dust on the bookshelf. This, it should be pointed out, had little to do with Autocourse itself and everything to do with my general lack of interest in its main topic: Formula One. I have every annual going back to the first in 1961, as well as what came out in 1960, along with copies of most of the issues of Auto Course that came out in 1951 and 1952, thanks to the International Motor Racing Research Center in Watkins Glen.

While there were only eight events in the 1961 world championship, there were an amazing total of 21 for the 2016 season! I will admit my surprise—and ignorance of the fact—that there were so many, although I was aware that the number had been creeping upward for years. The 21 events in the 2016 championship season make an interesting comparison with 1961: Australia (Melbourne); Bahrain (Sakhir); China (Shanghai); Russia (Sochi); Spain (Catalunya); Monaco (Monte Carlo); Canada (Montréal); European (Baku, Azerbaijan); Austria (Spielberg); Britain (Silverstone); Hungary (Budapest); Germany (Hockenheim); Belgium (Spa-Francorchamps); Italy (Monza); Singapore (Singapore); Malaysia (Kuala Lumpur); Japan (Suzuka); United States (Austin); Mexico (Mexico City); Brazil (São Paulo); and, Abu Dhabi (Abu Dhabi).

For race data and statistics fans, in the 2016 edition one also finds tire strategies, qualifying head-to-head by teammates, along with items such as “For the Record” and “Did You Know?” These days there is a separate chassis log that provides that information for each event.

What is the likelihood that I will purchase the 2017 edition of Autocourse? I had intended to end my run of the annuals with the 2009 edition. You can see how well that turned out. So, yes, if there is a 2017 edition, I will certainly add it to the others on the seriously groaning bookshelves in my library. While I might do so more to support something that has managed to persist against all the tides that have just about eliminated every other motor racing annual, there is also something comforting in having a new one show up every year.