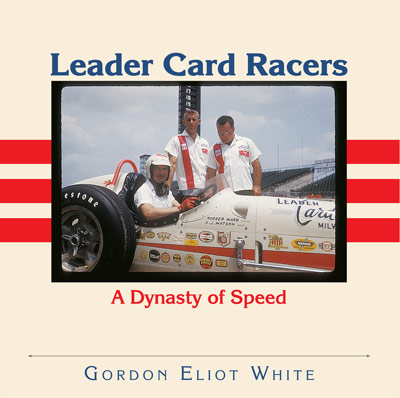 The 2014 Indy 500 is in the bag—for once with a nailbiter of a finish—and if Helio Castroneves had been able to defend his lead to pocket a fourth victory, it would have made him only the fourth man to do so, and conversation would have inevitably turned to the three that came before him.

If you look at old Indy photos you may spot the Leader Card logo on some cars, three times in the winner’s circle—Roger Ward (1959, 1962), Bobby Unser (1968). If that were to pique your curiosity, this book will satisfy it. Leader Card Works is the specialty paper company (business cards, envelopes, wedding cards etc.) founded in 1901 that from just before WW II and into the modern era fielded racing cars under the Leader Card Racing banner.

A number of things are remarkable about this company. For one, it is still in business (the current name is Leader Paper), and it is still family-owned. For another, three of the four generations that own and run it have an interest in racing. And they are still winning—no longer at Indy, too expensive for such a relatively small company to compete against multi-million-dollar corporate giants—and have a big trophy case to prove it: 134 USAC National victories, over 250 total feature wins, six USAC champ car titles, 4 USAC National tracet titles. 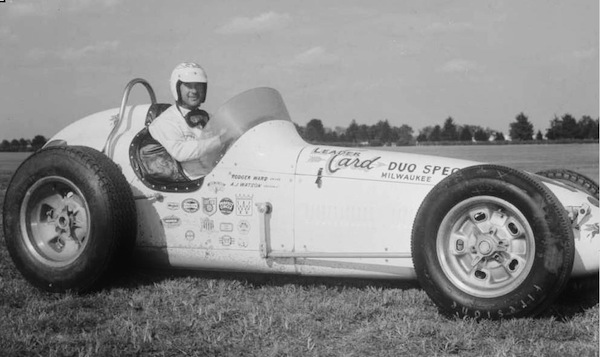 Some of the best drivers in open wheel history drove for Leader Card and some of the legendary mechanics worked for the Flying W’s, A.J. Watson and Jud Phillip. In fact, if you follow racing, you will know that just a few weeks ago Watson died (May 12), four days after his 90th birthday. He dominated the roadster era at Indy and was the winning chief mechanic four times and a fixture in Gasoline Alley for more than 50 years.

By telling the story of this unusual family’s unusual dedication to racing, author White gives the reader insight into how racing in America changed from a hobby of well-heeled amateurs to a proper sport with professional trappings to what it is today, a business.

White (b. 1933) has witnessed that progression first-hand, starting way back in 1952 as a contributor to Illustrated Speedway News. But he’s been a race fan since he was six years old when his dad took him to one of the first midget tracks in the country, Freeport Stadium on Long Island. Of course he built his own hot rods—but he’s also a pilot and holds a Coast Guard captain’s license. Oh, and he holds an international and US speed record for midgets (Bonneville, 1989). After retiring as a Washington newspaperman in 1991 he became the Auto Racing Advisor to the Smithsonian Institution. Such unusual interest in things that move, coupled with an inclination towards and academic education in journalism, mean that this book, his seventh at the time, is both thorough and well written. 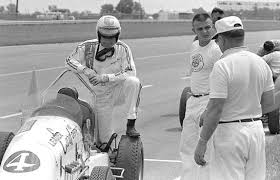 In the 1980s White began amassing a serious archive of racing publications, thousands of blueprints, and all sorts of other racing paraphernalia in addition to the actual racecars he already owned. His is the sort of archive that other researchers come to consult but for this book, it is the Wilke Family that furnished much of the primary sources. Robert C. Wilke had been the first of the Wilke clan to have an interest in racing—and the means to indulge it thanks to the company his father (d. 1954), then a machinist, had co-founded and over time ended up controlling. White paints a solid picture of these early days of industrial activity and consolidation in the US, the establishment of the car as an everyday fact of life, and both Wilke Sr. and Jr.’s interest in going fast.

The bulk of the book explores era by era the Wilkes’ role in racing as racers, team owners and sponsors, all satisfyingly illustrated. All the names you know and love are part of this story. If you didn’t appreciate before the impact of this Dynasty of Speed, you will now. That said, many readers will probably consider this a niche subject so one must applaud all the more this publisher, Racemaker Press, for throwing its name and its resources behind such a project. Another Racemaker author, James O’Keefe, he of the indispensable Winners Book, kept an eye on the 1958–94 Results Tables and created the 1971–92 USAC Silver Crown results. There is a Bibliography and one assumes it to be recommendations for “further reading” and not “sources consulted” because it contains quite a bit of lightweight albeit very readable material.

The Index is deep, listing even Bob Wilke’s personal Ferraris, several of which one-offs made just for him. The nicely laid-out text is commendably free of typos, photos are reproduced as well as the source material allows, paper and printing are nice—there’s nothing not to like about the book, including the price.

World Championship »
« To Boldly Go, Twenty-Six Vehicle Designs That Dared to Be Different