Jaguar XJ220: The Inside Story 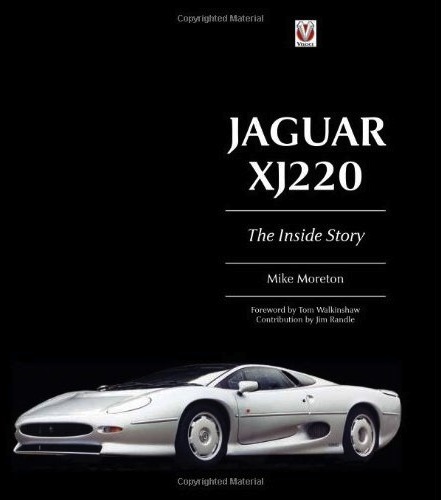 If you had never heard of the XJ220 and all you were told is that it was the fastest production car of its day, with a V12, all-wheel drive, spectacularly good-looking coachwork with scissor doors and luxuriously trimmed interior, you’d think it must have been the best thing since sliced bread! And that the few hundred people who even had the privilege of having their nonrefundable deposit accepted (of 1500 who tried to get on the waiting list!) were lucky indeed.

Whenever a company ends up having to sue its customers to actually buy its product and is stuck with unsellable cars for years after, you just know things are . . . complicated. Both of these extremes apply here, and in between them lies the story of this car.

Author Moreton can rightly claim to have written the “inside” story because he was the XJ220 Project Manager on the TWR/JaguarSport side. Other insiders are Tom Walkinshaw who wrote the Foreword (just in time it turns out; he died suddenly Dec. 12, 2010) and Jaguar’s 1978–1991 Engineering and Styling Director Jim Randle who wrote the chapter on the concept car. By having both the TWR and the Jaguar perspective the reader gets a good impression of just how much Jaguar management was caught unprepared by the phenomenal public and media reception to the concept car, a project the firm hadn’t even known existed until a week before its surprise unveiling at the 1988 UK Motor Show. Surreptitiously developed “on the side” by its engineers and subcontractors it was mainly intended as an exercise in livening up the firm’s image and showcase its capabilities—no one foresaw that customers would be falling over themselves to throw blank checks at Jaguar to take the car into series production. And it is that initial success that foreshadows the ultimate debacle: the specs of the show car proved not feasible for a real-world low-volume car. The V12 became a V6, awd was out, the doors were conventionally front-hinged. And the price went up. And up. No wonder that some 75 of the original depositors—even if some of them were only greedy speculators—refused to take delivery of a £403,000 car that no longer had the cachet they had signed up for when it was launched at “only” £290,000 (a princely £350K with tax).

It didn’t help that a global recession coincided with the XJ220’s 1992 to 1994 run. Produced in 275 copies (285 with prototypes) it did indeed hold the top speed record (350 km/h, 217 mph—not quite the target of 220 its nameplate alluded to. Three miles may not sound like much but in the rarefied world of supercars . . .) until the arrival of the McLaren F1 in 1994. It holds another record of sorts, that of Jaguar’s widest-ever car.

Much of the above bookends Moreton’s account whose primary focus is on the engineering/developmental work (his professional origins at Vauxhall; later also engineering, product planning, marketing, motorsport at Ford). The early chapters summarize Jaguar history, the relationship between TWR and Jaguar, and the formation of the 50/50-owned JaguarSport as a division of TWR. The reader is shown what rung of the automotive ladder Jaguar was aiming for, its sporting ambitions, and also the freedom special projects—by no means just the XJ220—enjoyed in the pre-Ford days (in Randle’s words: “Playtime was over!”). The bulk of the book looks at the build, the people, the processes and also the purpose-built factory at Bloxham, testing and certification, and customers. All these aspects are comprehensively illustrated with a good number of not-before-seen photos, memos, and various workflow charts and factory floor diagrams. Annoyingly, one photo is not only used twice (p. 37, 63) but is once captioned as being the interior of the prototype and then the “redesigned production interior.” More annoyingly, this is the only shot in which the dashboard gauge cluster on the driver’s side can be seen to extend into the door—a very unusual feature—but the caption doesn’t even call it out, and it would have been better anyway if the photo showed the door ajar. (How the world is a better place by being shown 10 photos of Princess Di traipsing through the factory is anyone’s guess.)

The 220C racing version is covered. Technical specs, to the extent that they are mentioned at all, are embedded in the text. There are no tables or the like of chassis nos., production changes, or markets etc. (The car was never DOT certified and thus not officially available in the US.)

An Epilogue examines cars that were possibly influenced by the short-lived XJ220 and the author’s subsequent work at Aston Martin. The Index is serviceable; both endpapers show the same partial b/w cutaway.

Back in the day, industry observers speculated that the 1988 concept car drummed up £14 million in free advertising for Jaguar. That story—especially in light of the epic flop that the XJ220 was in business terms—remains yet to be told on a comparable level of detail.