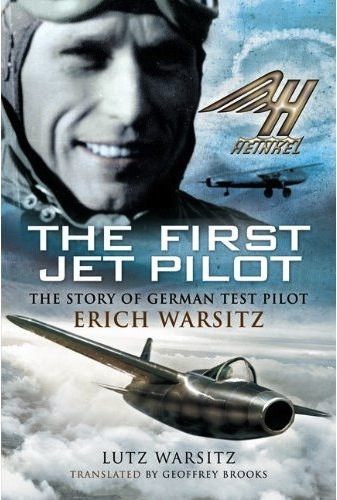 While written in the first person as if it were an autobiography, it is actually the protagonist’s son who used his test pilot father’s notes, logbooks, diaries, and interviews with him to fill an important gap in the history of the German aircraft industry during the late 1930s. The subject of the very birth of the jet age is of immense importance in aviation history and there’s still much to discover. Until the publication of this book, aviation enthusiasts knew little about the world’s first jet-powered airplane, the He 178, and even less about its forebear, the rocket-powered He 176.

While the US was making the first faltering steps in developing liquid-fuel rocket engines, Warsitz was regularly flying the He 176 liquid-fueled single-seater rocket-powered prototype. Not long after respected US engineers, in a report to the US Navy, publicly belittled the very viability of aircraft gas turbine propulsion, Warsitz quietly went about his business of flying the prototype jet-powered He 178! Remarkably, both He 176 and 178 made their first flights within two months of each other, June 20 and August 27, 1939 respectively. World War II started five days later on September 1 when Nazi Germany invaded Poland.

The book opens with Warsitz’s description of his early life and, for any pilot, the inevitable first view of an aeroplane and his subsequent efforts to find money for flying lessons. The aerospace limitations placed on Germany following the Treaty of Versailles automatically accelerated the development of the country’s gliding movement and so made the nation very air-minded.

Warsitz was obviously a natural and gifted pilot and he reports gaining a succession of increasingly important flying licenses that gave him the experience and confidence to eventually fly high-performance rocket- and jet-powered aircraft. Naturally ambitious, he soon tired of instructing Luftwaffe pilots and, by bypassing his commanding officer, found a contact in the Berlin hierarchy who could point him in the direction of the all-important Rechlin flight test center that approved and tested every aircraft design destined for the Luftwaffe. He was on his way.

Warsitz became a close friend and working colleague of Wernher von Braun who, amongst many projects, was developing a rocket booster motor to assist heavily laden bombers into the air, another example of forward-thinking German aerospace technology. One of Warsitz’s responsibilities was to flight test these boosters.

The book describes the development and flight-testing of the He 176 liquid rocket-powered research aircraft and He 178 jet-propelled prototype. In comparison, although Britain’s Sir Frank Whittle was paralleling Hans von Ohain’s jet engine developments, it is sad to record that while Heinkel and von Ohain enjoyed unlimited central government funding for He 178 airframe and engine development, Sir Frank was refused UK government funding and had to rely on personal friends to fund the building of his prototype jet engine!

Despite Germany’s huge lead in first flying the 178 in August 1939, the subsequent flight test program was leisurely. Warsitz reports that the He 178 made “. . . several more flights but not many.” Surprisingly, the first operational jet fighter, the He 280, did not fly until 18 months later. The He 280 was not a success; Warsitz flew it and reported tail vibrations. The Me 262, a significant improvement compared to the 280, first flew in July 1942. Warsitz also flew the 262  and stated that it was superior in every respect to the 280. The 280 was cancelled following an audit of important military programs. Thus the German jet engine lead was whittled away.

Warsitz spent a period of WWII in France teaching Luftwaffe bomber pilots how to use booster rocket engines on operations. When the war ended Warsitz was eventually captured by the Russians who wanted to pick his brains. He refused to collaborate and was sent to Siberia for 25 years but returned to Germany in 1950.

Sadly, this book is marred by the terrible quality of the technical translation (by Geoffrey Brooks who has translated a considerable number of German-language military texts and written his own books) into English which really grates on an aviator’s ears. Words like hull instead of fuselage are scattered throughout the book. The prizewinner is the description of the He 280’s uncowled jet engines as unjacketed!

Many of the photos are technically fascinating and to my knowledge have not been reproduced before. The final picture shows many interesting features of the He 176. One of the pictures shows Hitler, who keenly followed Warsitz’s activities, watching a flying demonstration of the He 176 by Warsitz in July 1939 at the Rechlin test center.

There is a lengthy list of Acknowledgements, based mostly on German contacts, plus a four-page Foreword that does place into context Erich Warsitz’s career by including comments by Wernher von Braun and Hans von Ohain. The Index is comprehensive; there are no Appendices.

The author maintains a very nice website on which is gathered a large number of period videos and general information.

Starting out at de Havilland in 1951, Jolley has spent his life in the aerospace industry, as an engineer, RAF pilot, and in public relations.

Mustang by Design »
« Isky: Ed Iskenderian and the History of Hot Rodding