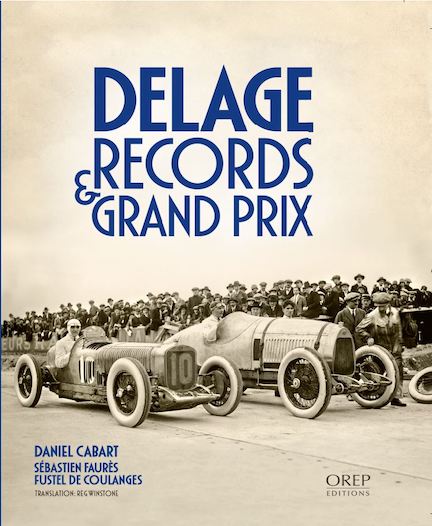 “For the four years from 1922 to 1925, in 15 to 20 events a year, the Delage marque was in the spotlight throughout France, month after month. The Delage DF thus became one of, if not the most, successful car in the history of motor racing. The DJ had nothing to be ashamed of; if it had fewer wins, it was only because it entered the field later. It could be said that its opposition wasn’t always up to the mark, but that is irrelevant.”

(French, English side by side) Outside of Delage circles it is surely not fully appreciated just how competent this firm’s racing cars were, and not just in the particular period under discussion here or in only one category of racing.

We began a 2009 review of a Delage book by saying that the serious literature on this marque is quite thin. Things have not changed much since then, and, in fact, most of what little has been written and qualifies as serious comes from the same pen as this new book.

Quick analogy: there is Wonder Bread, light as air and insubstantial; in the larger scheme of things it—probably—has its purpose. Then there is the whole grain artisanal loaf, heavy as a rock and dense enough to fight the blade. This book is that. Not that you have to fight it, but you best take small bites and chew slowly. Considering the small number of cars discussed (basically only 10, plus 2 engines) and that the text is divided into two languages, there is so much data packed into this book that rigorous attention and considerable paging back and forth is required to take it all in. Between them, the widely published, award-winning authors have decades of expertise in the subject matter. 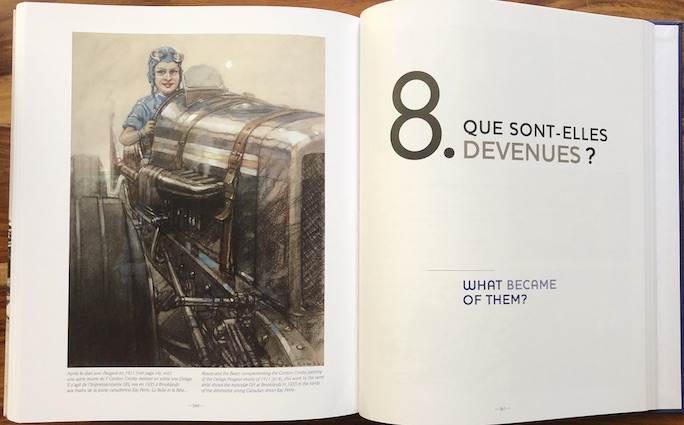 The caption for this DH model during a record attempt at Brooklands (clocking 134+ mph) refers to the car as “muscular” and driver Kay Petre as “diminutive.” Hard numbers tell a better story. The car: 10.7L (elsewhere described as “rather modest”) V12. The driver: 4’10″—her fingers probably can’t even fully wrap around the rim of the steering wheel but she wrangled all sorts of machinery into submission!

Conceptually and chronologically, this book is a prequel to Cabart’s last Delage book (with Christophe Pund), Delage, Champion du Monde, and inside and out is designed to match it. That book covered the Grand Prix 15-S-8 model that was fielded in the 1926 and ’27 racing seasons. The new book puts that car into context by describing the different technologies with which Delage experimented in a number of racing classes, mostly successfully, in the four years prior and follows their story into 1928. 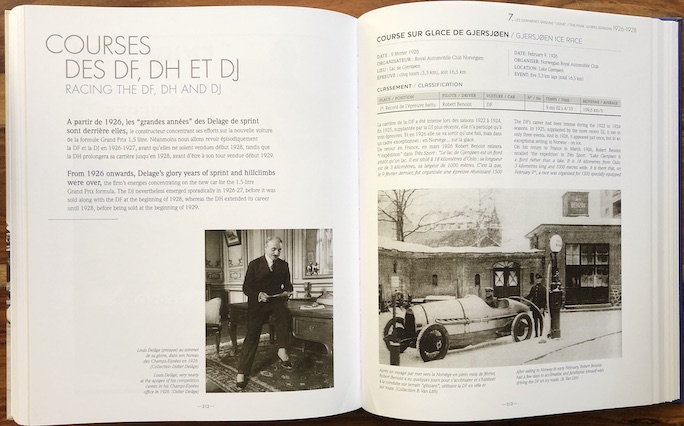 For the reader new to the subject of 1920s Delage racing cars some preparatory reading elsewhere may be useful to get a sense for how the firm fits into the larger scheme of period motorsports and also how racing  fits into the overall Delage portfolio. It is nothing short of remarkable, especially in view of the small size of the company, how important racing in any and all classes was for Delage and how early in its life cycle it started.

This book cuts right to the chase without any preliminaries, introducing engineer Planchon and driver Thomas before switching to in-depth treatment of each year, 1922–25, dividing each season into the two main categories of Hillclimbs/Record Attempts and Grands Prix, each of which further divided by model of car. The individual cars are described with meticulous attention to technical/developmental features (down to such granular detail as, say, valve diameter; and don’t think people aren’t interested in this sort of thing—if you can’t find it in this type of book, where would you?), race performance of cars and drivers, and chassis identification. The latter, in the context of vintage cars (and especially prototypes and project cars/components), is fraught with complications. It is worth pointing out that the book was translated into English, and most capably too, by Reg Winstone who is himself a widely published expert on French cars in particular and vintage motoring in general. It is surely no idle boast when the authors claim to have settled most of the mysteries, two exceptions being the configuration of the 2LC motor and pretty much anything regarding the presumably unbuilt DK model for which only a diary reference under the heading “Supercharged 12VF” seems to exist. 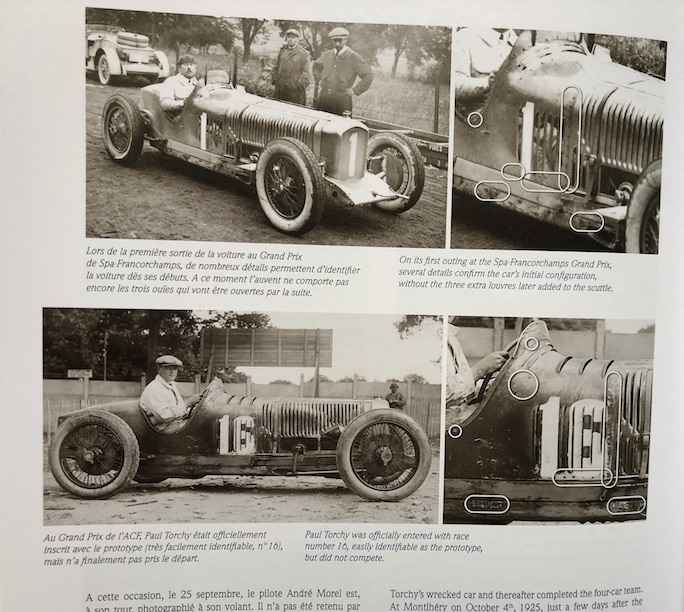 Note the highlights superimposed on the close-ups of the full pictures on the left; they explain what features the authors analyzed to help them ID a specific car.

Unlike the previous book, this one has an Index, and it will surely see much use. There are also footnotes at the back of the book (but not referenced to the chapter or, better, page on which they occur so good luck trying to find again the page they go with) and a Bibliography. Six Appendices contain a reprint from a 1925 magazine, technical specs, a sort of family tree of Delage racing racing engines, a look at the four gearboxes used in period, tables of race results, and lastly a table of performance figures for 4 competitors (the abbreviations of the units of measure are in French, translating to “hp” and “rpm” en anglais). 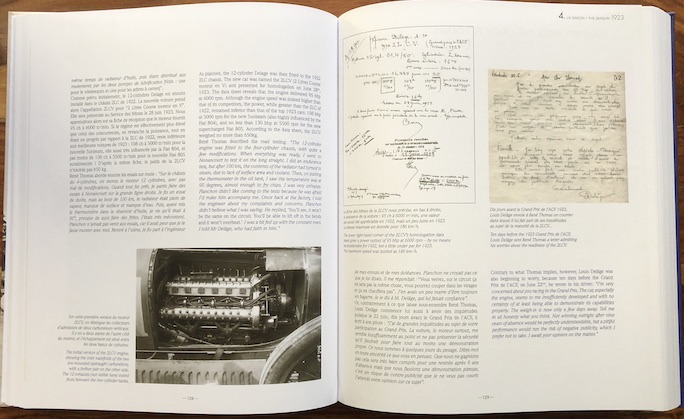 An example of the many facsimiles reproduced here; on the right page a homologation sheet and a letter from the boss to his driver discussing radiator woes. 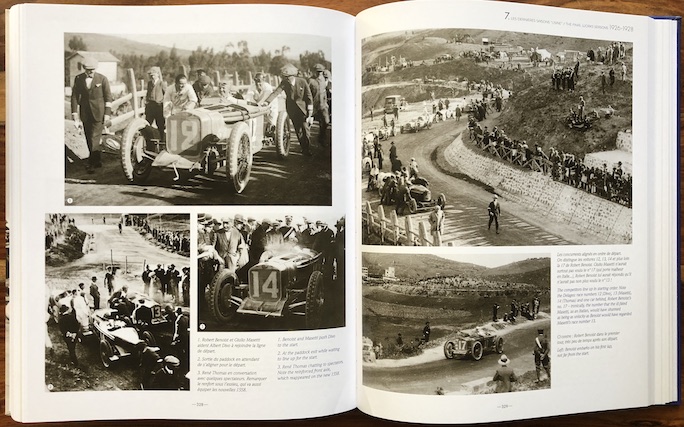 Random pages, just to sample the lovely period images in this book. 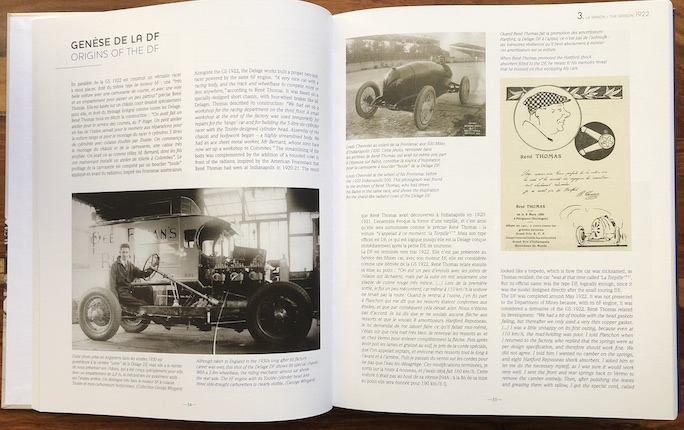 Also unlike the previous book, this one had the luxury of not having to be rushed into production, with correspondingly good results.

Several pieces of fine art augment the plentitude of very well reproduced and thoroughly captioned b/w period photography, ads, brochures, and documents. Anyone who now develops a lust for these Delages must study ch. 8 (“Que sont-elles devenues?”) and devise a strategy for favorably impressing their current owners.

For the merely casual reader this is a fine, rewarding book in every regard, but anyone familiar with the rigors of research will praise it as a truly uncommonly deep dive of a high order. If we did such silly things as Top Ten lists, this would be on it. The previous book won an award, surely this will too.

Update 1/8/2022: won the Royal Automobile Club’s 2021 Motorsport Book of the Year Award (in the No Price Limit category).

US readers: if you look for this book on Amazon, beware. Some fool has listed it as a softcover. No such thing exists. Order instead from the authors’ eBay listing.