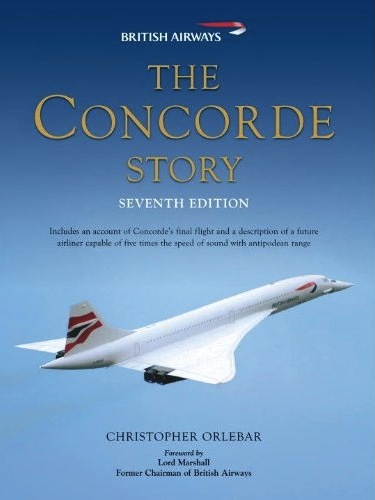 “It ranks with the architectural marvels of the world—the Pyramids, the Gothic Cathedrals and the Taj Mahal.”

First published in 1986 on the plane’s 10-year anniversary in commercial service this is the only one of the many, many Concorde books to have reached a service life—25 years—almost as long as that of the aircraft—27 years—it covers. Continuously reprinted/updated the book is now in its 7th edition and has sold in excess of a 100,000 copies, a goal no less lofty than many of the numbers Concorde racked up in its eventful life.

Why should this book be the one to be graced with such uncommon success? The most obvious but probably least likely answer is that it is the “official” Concorde book by virtue of having been produced in collaboration with British Airways, one of the plane’s former operators. A better answer ought to be that after a 10-year stint as Concorde pilot and instructor, Orlebar knows his subject inside out. Then again, his book is not the only one by the hand of former flight personnel. You can’t even pin it on his post-British Airways advanced wordsmithing skills as a writer, lecturer, and tv consultant—or the visibility derived from such exposure—because he didn’t embark on that career until 14 years after writing the original version of the book. Whatever the reason, here’s a new edition and if you don’t already own any of the earlier ones, here’s the opportunity.

Quite a bit has happened since the last edition came out in 2004, one year after all Concordes had been withdrawn from service in the wake of general concerns over cost, politics and an uncertain future, and the specific circumstance of the one and only crash of a Concorde that claimed all 109 souls on board (and four on the ground) in 2000. It was only in 2010 that a French court handed down its ruling in the crash and the book presents a detailed analysis of the technical and decision-making aspects of the incident (including black box-derived graphics of acceleration, rudder, and thrust) and commentary about the ruling. Further, it talks about some of the airframes that have found their way into museums and offers an all-new appraisal of the future of supersonic airliners.

In the unlikely event that this is to be your only book on this subject (a practice not at all to be encouraged!), you would be well served. You would be better served if you sprang for at least one other book, Chief Test Pilot Brian Trubshaw’s Concorde: The Inside Story (The History Press, 2000, ISBN-13: 978-0750923934). In terms of depth of coverage, the two books complement each other well. It is as expected that the chief tester should go into great technical and developmental detail as it is unexpected that it is him who goes deeper into politics and politicking. Orlebar touches upon these matters, but with a different level of magnification. What he does singularly well, right from the beginning, is instill in even the nonaviation or nontechnical reader a sense of wonder at the astounding engineering solutions this aircraft represented. It is truly one of the wonders of this world. And remembering that the futuristic Concorde was designed in an era of slide rules and vast rooms full of drawing boards only underscores the challenges.

The very first chapter lays out the theory and terminology of supersonic flight. This is a rather complicated subject and even old hands will probably find in Orlebar’s clarity of exposition something that will make their own thinking more elegant. The early history is concisely described, from the near-sonic 45º dives in 1943 in a Spitfire to the first jet (Gloster) to the first supersonic project (Miles M52). The emphasis is on the roles of engines, thrust, fuselage and control surfaces and the further challenges of adapting military capabilities (supersonic hops in short burst of speed with pilots in pressure suits) to sustained long-range flight for civilian SSTs (with passengers in shirt sleeves eating canapés). Early jet airliners (Comet, and the VC10 on which Orlebar started his professional life) are covered, as are alternate SST proposals and the emergence of the final Anglo-French government concord agreement that combined the manufacturing efforts of the British Aircraft Corporation and Aérospatiale to create Concorde. The detail here is sufficient but there is more, in particular about the latter two items and also Concorde design/testing, in other books.

One chapter each take the reader into the cockpit for the beginning (preflight to reaching altitude) and ending legs (descent to shutdown at the gate) of a supersonic flight. Procedures are explained and often enough the science behind them. Throughout the book, Orlebar makes every effort to explain in what manner the laws of the physical universe affect the behavior of things in it. Without fail, you will learn a lot of things about a lot of things—and it’s easy!

Very little is said about something surely not widely known: that when flight services were declining, crew members could charter the planes at nominal cost. (How cool is that?! Stewardess Jeanette Hartley was the first.) Orlebar did it himself for two days in 1981 to celebrate the 50th anniversary of Britain winning the Schneider Trophy.

Photographically the book is very strong. Quite a large number of images are unique to this book, partly because Orlebar took them. One photo deserves special mention for its symbolism: a full-spread image of a retired Russian TU-144L decaying in the woods outside Moscow, three years prior to its 1996 recomissioning for a joint Russian-NASA project. There is also much archival material from vendors and airlines. The Appendices too add useful and partly new material to the record: formulas for calculating range and flight envelope; aircraft dimensions, plan view and cutaway; technical drawings of the Olympus engine; lists of the 20 aircraft built (registration, serial no., 1st flight, total hours, landings, current whereabouts); a French and a British personnel roster of flight crews; a detailed chronology; and lastly a 2003 list of destinations from Heathrow airport. A Bibliography and a fine Index round out the book. Note the low price!