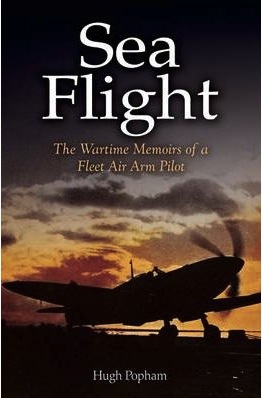 When first published in 1954, this memoir was the first of its kind by a wartime World War II pilot. An aspiring lawyer, he had a way with words and a way of looking at things, and his first book, an anthology of poems (Against the Lightning, 1944, ASIN: B0006DACNQ), was written during the war while he served his first aircraft carrier tour of duty. That was HMS Indomitable, to which would be added three more carriers: Illustrious, Campania, and Striker. He writes with a certain weariness, reluctance even, and one wonders who had such powers of persuasion to make this seemingly modest man put pen to paper and write about himself.

In the Afterthoughts he does allow that “what happened to one happened to many, but not to all.” So while there is something archetypal in his experience he is quick to insist that he considers himself luckier than most, in the planes he flew, the stations he was posted to, and the actions he was engaged in.

It is a pity that we cannot simply lift the Foreword by David Hobbs and make it the book review. He says everything that needs saying and, as a naval pilot himself and later Deputy Director/Curator of the Fleet Air Arm Museum he brings a proper perspective to both his Foreword and Popham’s (d. 1996) memoirs. Moreover, it is this very book that inspired Hobbs to become an aviator in the first place and, he says, he read it repeatedly before, during, and after his own military service. He wrote this Foreword in 2010, when the book was at last reprinted, and so one can hardly argue with him when he says that in the fifty years since,“Many have followed it but none have matched its ability to draw the reader into the events as they unfold.”

And events there are many. In fact, quite aside from the fact that this is a memoir, the book is useful to anyone who wants to get a sense for the enormously rapid and wide-ranging changes to branches of the British military services, to the sheer logistical challenges of ramping up personnel and materiel, and to the evolution of tactics and doctrine. When Popham volunteered for service, the Navy had only 400 front-line pilots and already double that number by the time he joined his first squadron. The Navy also had just then taken back control of its carrier-based aircraft from the RAF (a cumbersome “division of labor” in place since 1918 that had caused plenty of division in the services). The first plane he got to put his name on was a Sea Hurricane, then the Navy’s most highfalutin’ aircraft—of which a mere 34 were in service.

From training to active duty Popham paints with dry humor a picture of a young man and a young pilot maturing. The stress of taking exams, the stress of carrier landings, a mid-air collision in a Seafire that broke his back, life aboard ship in tight quarters, getting along with peers and superiors—the reader gets to look over Popham’s shoulder, an impression only enhanced by his liberal use of dialog.

The b/w photos are bundled into an 8-page center section. They are all quite dark; half the photos are printed sideways which resulted in the captions of the ones on left pages being buried in the gutter, readable only if you do bodily harm to the book. Don’t bother, they say nothing important anyway. No Index.

We close with the last sentences in the book: “From this fruitless exercise in human perversity, nevertheless, there were certain things worth retrieving: the moments of exhilaration, of tranquility, of intensified experience. They were the waste-product of violence, part of no pattern, irrelevant to the purpose at hand; but they stay in one’s memory after many other things, that seemed of greater weight at the time, have been rubbed out. They are the souvenirs which one brought back from the ruins.”

The Stewardship of Historically Important Automobiles »
« The British Motor Industry, 1945–94