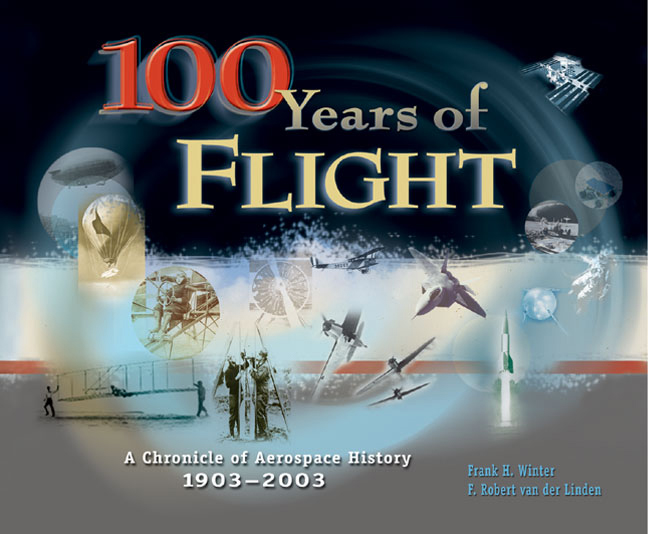 Published by the two most prestigious institutions in the field, the American Institute of Aeronautics and Astronautics (AIAA) and the Smithsonian’s National Air and Space Museum (NASM), this compendium chronicles in timeline fashion the century of endeavor since the Wright Brothers’ first heavier-than-air flight in 1903. The book lists the high points of those hundred years, in other words the authors exercised judgment as to which of the thousands of candidates constitute the “most significant, illustrative [and] interesting” events and were deserving of inclusion here. The guiding principle is to show continuity of progress, and trends. This is the same methodology the authors applied in over 30 years of writing the monthly “Out of the Past” column in the AIAA journal Aerospace America (before 1984 Astronautics & Aeronautics) from which the bulk of this book is drawn. Author Winter was on staff at the NASM and became the column’s principal editor, later joined by van der Linden as coeditor; the former is now Curator of Rocketry and the latter Curator of Air Transportation and Special Purpose Aircraft.

Unlike their column, for reasons of space the entries in this book do not list sources. This, coupled with the fact that the authors allude in their Preface to time constraints in the preparation of the book, poses a dilemma for the reader who, considering the brain trust behind this book is disposed towards taking its contents as gospel. On the other hand, even if one were to be proven wrong after citing chapter and verse from this book, one would be in good company. Spot-checking and cross-referencing a good number of entries raised no flags and only a few misspellings of proper names, especially foreign ones. While it is not so stated, this [version of the] book must be a revised version of the original because several dozen discrepancies that had come to light early on are here already corrected. It also covers the entire year 2003 whereas the Preface states that a separate supplement was to cover that.

The book, in landscape format and nicely designed and typeset, is divided into 10-year increments (not the same as decades), each introduced by two to three pages of overview/background/context. Key events are then described in ascending order of year, month, and day. Certain events are set off on different-color backgrounds but the criteria for such treatment is not apparent or disclosed. Various sidebars present related peripheral information. Cleverly each page in a section has a color bar at the outside edge that functions as a quick-find tab (and also shows at a glance that the 1925–35 section is the most extensive). There is a plethora of photos and line art, mostly from NASM, NASA, or DoD archives (not all are credited).

Readers with strictly car-centric interests will want to know that there are several references to rocket cars.

The Foreword is by Albert Scott Crossfield (1921–2006), here simply referred to as “aviator” which hardly represents the fullness of this decorated aeronautical research pilot’s career. Two Epilogues by NASM staff consider the future of flight and spaceflight. There is a summary listing of sources at the end, along with a Suggested Reading list and several Indeces (people, company, notable craft). The relatively low price for such a hefty piece of work was made possible by the underwriting of several aviation/aerospace companies.

Whether you read the book cover to cover or at random, you will get a firm appreciation for Man spreading his wings in a multitude of ways.