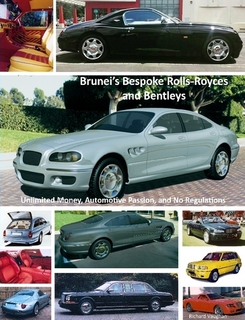 It unfolds as a contemporary, surreal, Indonesian, Conradian adventure. Sail southeast from Vietnam over the South China Sea. You pass through some tiny islands and eventually dock at Bandar Seri Begawan, the capital city of the Sultanate of Brunei. The white marble and the golden dome of the Omar Ali Saifuddien Mosque, some say it is the most beautiful mosque, gleams like a fantasy on the horizon. The Ceremonial Ship glides by. With its onboard pagoda and sculpted prow, you are transported back through time to a mythical, exotic, romantic age. And if you are an automotive enthusiast, especially one interested in Rolls-Royce and Bentley motorcars, you would just as soon return to the present to somehow be given access to the fantastic automotive collection of Sultan Hassanal Bolkiah and his brother Prince Jeffri.

“Fantastic” here is neither a throwaway description nor is it hyperbole. Imagine huge warehouses filled with thousands of cars, sorted by color, rows upon rows of sunshine yellow, vivid green, glistening teal, and flaming orange. More somber colors are also in the mix, silver, deep blue, claret and black. The collection includes many marques, most prestigious, some prosaic. But as the Rolls-Royce and Bentley brands, historically and presently*, maintain their exalted status, it is good that the author has researched these cars of the Brunei collection and has shared with us his findings. It is good because up until a few years ago, these cars, throughout the world of Rolls-Royce enthusiasts, were known to exist, but what they looked like and their history—their chassis numbers and VINs—were well kept secrets.

Considering that the age of cyberspace has been with us for many years, it is unsurprising that more and more information and images have surfaced. Airline employees, some who regularly correspond with Vaughan, photograph the cars in transit. A Bentley enthusiast sees a Brunei car in front of a posh shop in London and employs his cell phone. Contributors to the Australian website Bentley Spotting post their finds. An employee surreptitiously brings a camera to the warehouse. Having worked in automotive design, Vaughan also knows and relies upon colleagues in several design studios worldwide. Thus this book.

Brunei can be considered as an addendum to Vaughan’s previous book, Rolls-Royce and Bentley Coachbuilt Specials in the Modern Era.** That book devoted a chapter to the Brunei cars and there is an overlap of photographs and information, inevitable given the scarcity of either. But that doesn’t mean that the current book should be considered superfluous; it should not be ignored. Unlike Coachbuilt Specials, Brunei offers lists of chassis numbers, de rigueur for Rolls-Royce scholars and enthusiasts. There are more photographs in the new book—with a few under-construction shots, and Vaughan has gathered many more interior images. A few reproductions from the uber-rare factory brochures are included, as are illustrations and line drawings from coachbuilders. It is safe to say that Vaughan covers the subject as completely as anyone could do.

Be warned, however, that because the photographs were often taken with inferior cameras and often taken on the sly and/or in unsuitable circumstances, many are subpar. The design and aesthetics of the book could stand improvement, and the book is not without typos. But the copious information, both textually and pictorially, more than atones for these shortcomings. Highly recommended.

*Since 1931, Rolls-Royce and Bentley motorcars were built by the same company, often using only badge engineering to differentiate the two. Since the end of World War II to the turn of the century, they were produced, side-by-side, in the factory at Crewe, England. It is said that the Sultan of Brunei and his family ordered so many cars during the 1990s that they kept the company afloat.

**The latest edition of this book has a handsome cover photo of the new $10,000,000 Rolls-Royce Swepttail.