Champion of the Lark

Harold E. Churchill and the Presidency of Studebaker-Packard, 1956–1961 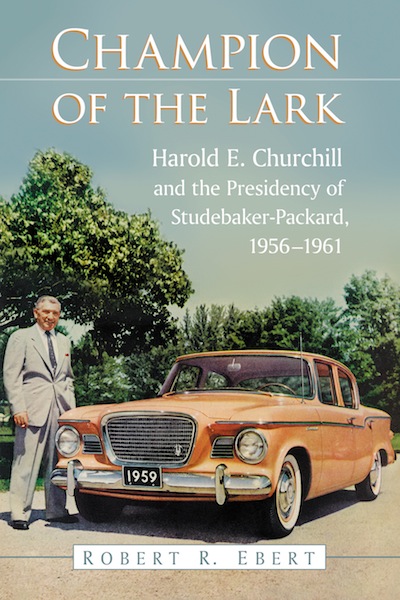 “Perhaps in a broader and more philosophical sense, Churchill was successful, not only as a corporate leader, but as a determined, positive, visionary, understanding, and decent human being.”

Many who read this may already be conversant regarding the basics of Studebaker history. Further, there is little in this book of a biographical nature on its subject Harold Churchill. So what merits it being considered a worthy addition to your library?

That answer is two-fold. One is the author’s expertise and the other has to do with the source documents he utilized in order to write the book. An added plus is that the author is a skilled communicator. That means his words are lucid, readable, and interesting with the reader never in danger of drifting into a state of ennui.

In a charming response to an inquiry from your reviewer, Ebert conveyed that, “If truth be known, while I pretend that my interest in Studebaker-Packard is academic and research-based, the fact is it is an addiction. Although I have written numerous papers and articles (first one in 11th grade) on Studebaker-Packard, and my master’s thesis was on the fall of Packard, this is my first full book related to the topic. I became addicted to Studebaker-Packard via the 1957 Packard when it was introduced in January 1957. My first car was a ’59 Lark bought in 1962 and there has been an S-P product in our garage ever since. Again, I repeat, it’s an addiction.”

What is not shared in the foregoing paragraph is that his undergraduate, graduate, and doctoral degrees are in economics. Subsequently Ebert devoted his professorial career to teaching economics on the university level.  So while he may have been indulging his addiction, we readers are the beneficiaries.

Ebert approaches understanding that which transpired at Studebaker-Packard 1956­–61 from the perspective of its executives and in particular Harold Churchill. While this may not be the usual approach for an automotive history, it is revealing. As an example, it is unlikely that a history with a product or consumer focus would have considered it important, much less cited what Churchill noted shortly after he had been promoted in 1955 from a career engineer at Studebaker to head the division, and then, a scant year later, was promoted again to the presidency overall of Studebaker-Packard (1956–61). What Churchill wrote was:

“Well, I had a shocking experience. I think I was and still am . . . a loyal Studebaker individual; my devotion and responsibility was centered on my fellow Studebaker employees. The first thing you do when you become president of an organization, your loyalties immediately change. Your responsibility is to the owners of the business. I knew this was going to happen, but it takes a little adjusting to do.”

These days we’re used to hearing a top exec portrayed as a hero one minute, then vilified the next. Yet even when Churchill stepped aside in order to permit Sherwood Egbert to assume the presidency, Churchill remained in active service with S-P as a member of the Board of Directors. Moreover after Egbert’s health forced S-P to retire him and Byers Burlingame became president, subsequently making the decision to end Studebaker production in the US, it was Churchill who was instrumental in smoothing the transition to Canadian assembly.

As the bibliography and chapter notes make clear, Ebert and his research associates spent hours combing through the corporate papers most of which are housed in theStudebaker National Museum. They also read numerous period publications as well as many others published more recently. So while you already know the story best from the product perspective, now you can gain from the thoughts and decision making processes that went on well before any announcements to the public.

By the way, do not be influenced by the marginal quality of the cover’s appearance. Something obviously happened—or didn’t happen but should have—during the scanning or preparation of the image for use on the book’s cover. The original image is from Studebaker’s three-page November 1958 advertisement introducing Lark. The cover of the actual book appears just as “murky” as you see it here.

So don’t let appearances keep you from enjoying and learning from Robert Ebert’s very readable Champion of the Lark, Harold Churchill and the Presidency of Studebaker-Packard, 1956-1961.

Champion of the Lark

Harold Churchill and the Presidency of Studebaker-Packard, 1956–1961

Spitfire Aces of Burma and the Pacific »
« Detroit, An American Autopsy