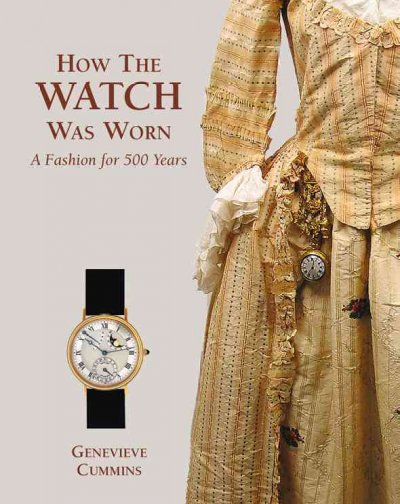 “The watch can be a strong symbol of status and is frequently portrayed in advertisements as a symbol of sexual attractiveness and success etc. with the inclusion of famous people such as movie and sports stars.”

Those people who nowadays marvel that some cars cost more than houses are often not aware that still today there are watches that cost more than even those cars, and not just blueblood vintage collectible timepieces. In the days of yore, in a quieter world with fewer “things,” a watch was most definitely a very visible way of setting oneself apart from the great unwashed—especially when it was not worn, as today, discreetly under a shirt sleeve but strapped to the waist or neck or any number of places.

If the only way you tell time is by looking at your smart phone, you’ll have some catching up to do to fully appreciate the portable, wearable watch as a fashion accessory for men and women. The watch/clock as a mechanical wonder and tour de force in early miniaturization has been covered many times and in many ways but Cummins’ approach is from a different angle. This book is a compendium piece to her 1994 opus Chatelaines – Utility to Glorious Extravagance (a chatelaine being a decorative belt hook or clasp from which various household or other items are suspended from a chain). This topic is a niche within a niche and her well-received book made manifest to just what extent this collector of antiques (whose day job is being a Paediatric Surgeon in Australia) pursues “themes” in her collecting. Her second one, Boxes – Inside and Out in 2006, was by comparison of almost universal relevance.

This third book revisits the subject matter of the first but puts it into a much larger frame of reference. It also takes it to a whole new level inasmuch as period-correct costumes were specifically created—when they couldn’t be bought or borrowed—to show the watches in their natural habitat. Hence, from prop buyer to fashionista and social historian to watch collector, everyone will discover something in this book. In fact, the latter may well recall hearing about this book in 2010 when the clothes and watches were on display at the convention of the National Association of Watch and Clock Collectors (NAWCC). And while any modern collector will be cognizant of the implied quality of the “Swiss Made” appellation it may well surprise many to learn that in the late 18th and early 19th centuries that are the book’s primary focus it was British watches that carried the price and prestige premium—so much so that more than one Swiss watchmaker resorted to making fake British watches emblazoned with “Made in London” labels!

In a short Introduction Cummins takes the reader back to the very beginnings of the idea of horology, of time-keeping, or rather -telling in all its forms such as measuring shadows on the ground or the burn rate of incense sticks. The story is quickly advanced to the period of the wearable watch and examines in detail, and chronological order, the various ways watches were attached to the human form: hanging on or from fobs, chains, buttons, brooches or worked into earrings, walking sticks, parasols, purses etc. (Readers who do have the Chatelaines book will find some of that material repeated here, of necessity so as to complete the story.) It must, however, be realized that only Western European, US American, and some Australian examples are considered. Even watches for dolls are discussed.

Each main topic is introduced with several pages of fairly dense, detail-laden prose. Correct nomenclature is important here and Cummins notes its inconsistent use in period publications from ads to titles of paintings and also over time and by region. These waters are plenty muddled—and not all is resolved here in a definitive way but those people who must use or devise standardized references, curators for instance, will find her guidance useful. Collectors should note that no prices are given or all sources listed.

More than even the comprehensive text it is the 1000+illustrations that will occupy the mind. They are a testament of their time, not only in regard to the watches or fashions they depict. Even, say, something as peripheral as the length of a man’s fingernail or as obvious as a woman smoking a cigarette speaks volumes about society, culture, environment. And even though it is those forces that shape how people dress and accessorize, it is easy enough to see that Cummins limiting her commentary and analysis to the style and form of watch and costume is surely based on a need to keep the topic from mushrooming rather than an unawareness of the bigger historical context.

No matter your own specialty or interests, you’ll not get tired of looking at the illustrations here. The detail in the captions alone could spurn all sorts of further inquiry into all sorts of human behavior.

Both the Bibliography and the Index are subdivided into several appropriate categories—and the photo on the very last page is a riot. That paper, printing, and binding are top-notch is par for the course for this type of book in this publisher’s hands.