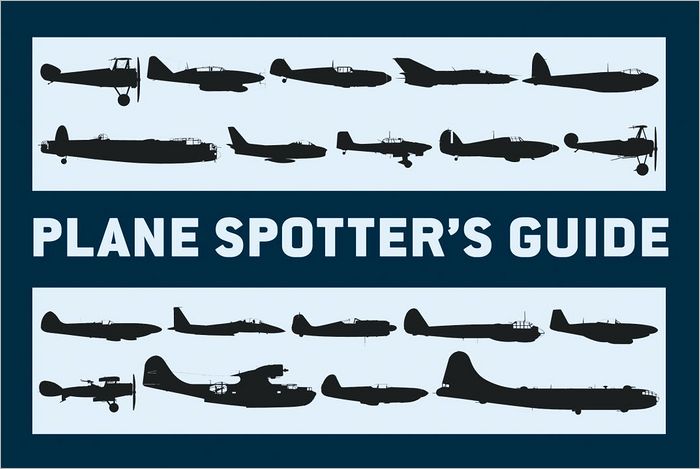 Next time you head out to a military air show, take one of these along. At a size of 5 x 7.5” it’ll fit into any pocket and at under $12 is cheap enough to give away by the handful.

This little book is not a spotter’s guide in the conventional sense, though. Instead of the normal 3-view drawings it only shows profiles (left side only) and contains only 70 aircraft, 2/5 of which post-WW II. They are listed in, basically, chronological order by first flight, from the 1916 Sopwith Pup to the 1974 Rockwell B-1B Lancer. There’s a seemingly arbitrary exception to this rule: the first-flight chronology is superceded by the in-service date of the actual aircraft depicted by the color profile which are of a specific plane with specific markings that place it in a specific theater of operations and timeframe. This results in, for instance, the “newest” aircraft in the book, the Harrier AV-8B with a first-flight date of November 1981, correctly following the F-117A Nighthawk from June 1981 but being itself followed by an older aircraft, the B-1B Lancer bomber from December 1974—because the Lancer drawing is of an airframe in service in 2005. (Strictly speaking, the 1974 date would be for the B-1A, the B-1B being flight-tested first in 1983.) This all sounds needlessly complicated—the price you pay for exactitude—and in the field should have no drastic consequences. That said, the Table of Contents follows that same order, so the knowledgeable aircraft geek probably would notice this lack of linearity right away. 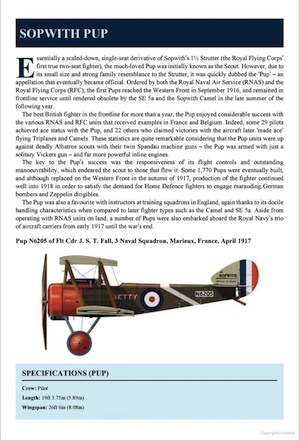 The book is better described as a mini reference guide inasmuch as each aircraft is presented on three pages, the first of which containing a general history of the plane and/or maker along with operational considerations. This is followed by a table of basic specs (dimensions, speed, weight, range, powerplant, armament etc.) and then remarks specific (remarkably specific!) to the two illustrations. These usually show two different marks and are very precise in terms of technical features and markings (serial number, squadron, pilot/crew, base, date). So, if you’re out in the wild with this book, chances that you will see the exact aircraft shown in the book are practically nil but you can still use it as a basic reference for the aircraft type you’re looking at.

This publisher is rightly renowned for both the quantity and the quality of its aircraft publications, most of which feature profile and 3-view illustrations. It is from those books, mostly in the “Aircraft of the Aces” (founded, incidentally, by the author who has been an Osprey editor since 1989) or “Squadrons” series, that the drawings in this spotter’s guide are culled.

Cleverly, the book even contains a metric–US conversion table (length and weight only).