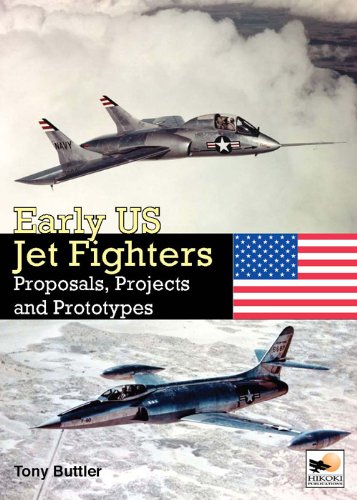 “What is perhaps surprising is that during the mid-war years there was little by the way of design competitions for new fighters for the Army Air Force. Instead, once the manufacturers had become aware of the capability of the new form of propulsion and found out the dimensions, weight and performance for the newly available jet engines, they went ahead and built designs around them.”

This little paragraph is the key to the book; overlooking it is probably why some reviewers have found this book wanting, especially in comparison with the author’s other work: the absence of formal design competitions administered by one specific body, i.e. the military, caused a vacuum that well-intended (and, yes, business-minded) aircraft manufacturers filled on their own reconnaissance. Result: one hand not quite knowing what the other is doing. Result: duplication, lack of synergy, waste. The focus of this book is on the transition from “everybody doing their own thing” to defining design and performance parameters and seeing how the manufacturers proposed to fill them. What the aircraft presented here have in common is that they remained unbuilt or didn’t go operational because they were lacking “something.” Another way to think of them is as “runners up” to the ones that made the cut as fleet aircraft.

It should also be appreciated that it was the publisher, not an author attempting to foist a book filled with leftovers from previous books (specifically American Secret Projects: Fighters & Interceptors 1945–1978, ISBN 978-1857802641; it has a companion volume on bombers) on a gullible audience, who took the initiative to bring to market a title that makes sense mainly in the context of other books. This book is meant to complement others, to flesh out the record, not to be “the one and only.” Buttler devotes most of his Introduction to make this clear and we can’t do better than to quote him: “Therefore, although it covers ground featured in previous books, this new volume provides far more detail and many new illustrations of the unsuccessful designs of the period.”

This “new material” refers to files uncovered since the publication of the ASP book in 2008 at the US National Archives (NARA College Park) and, to a lesser extent, files at the British National Archives by A&AEE and RAE staff that shed light from a British perspective on early American jet ideas. Aside from considering new source material this book further advances the written record by discussing seaplane fighters and the first supersonic U.S. Air Force and Navy aircraft.

The author’s professional background in the testing of airframe and engine components for all the world’s major aircraft coupled with his interest in aviation history specializing in design and development makes him an astute analyst. What he writes about is, basically, what he himself is curious about. After years and years of doing this he has a tall stack of books to his name and a little black book full of useful contacts.

The vacuum in terms of formal requirements alluded to above also means that a new vocabulary for a new technology was not yet standardized, hence there is some terminology in the book that may be at odds with modern usage. Buttler has retained it for authenticity’s sake.

Each of the twelve chapters covers a different category of aircraft and the prominent exponents in each: the first USAAF and Navy jets (with, naturally, reference to propulsion by piston, turboprop, or rocket); three chapters about USAAF All-Weather Fighters, Penetration Fighters and Interceptors; four on Navy Night Fighters, Day Fighters, Long Range Escort Fighters and Interceptors; various one-offs; early supersonic work. Each chapter ends with a conclusion. If you have the ASP Fighters book, this new book will fill gaps there. If you don’t, it’ll introduce you to a fertile period of rapid advances in aviation in and of itself but it’s probably not an ideal starter/stand-alone book (but, once more, the reminder: it is not intended as such in the first place!).

As it is mainly specialist readers who will seek out this book it is worth noting what the five appendices contain: Air Force and Navy combat aircraft test bases, American fighter aircraft designers, ideas for in-flight refueling, impressions by British flyers of certain prototypes, American engine manufacturers. Some of this will be of particular use to a British audience (ditto the Glossary).

As all Hikoki books in this ever-growing series the book has high production values, good paper, and satisfactory photo reproduction. An aberration in this one is that several of the technical drawings are so tiny as to have illegible legends (but the sources do disclose the location of the originals). While this will disappoint modelers, there are some very nice examples of manufacturer’s drawings and scale models. The Index is divided into aircraft/projects and people.

The body of literature in this area is growing but mostly confined to specialist magazines; this book is a step on the way of making the subject accessible to a larger audience.

Cosmos »
« Popeye In a Sock for Susan’s Sake