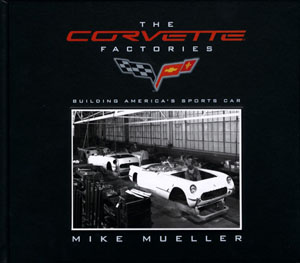 Mike Mueller has scavenged the General Motors Media Archives and we are the better for it. His 192 page book, The Corvette Factories: Building America’s Sports Car is filled with more than 300 photographs, 150 in color, that start out to tell the story of the three factories that have built America’s sportscar, but in the end provide a detailed history of the famed fiberglass flyer.

This is not Mueller’s first book about Corvettes; in fact he has written almost a dozen of them over the past decade and a half. This is not a bad thing as it means the information provided in The Corvette Factories has been well-vetted by editors and enthusiasts. The long history of the Corvette has thus already been covered elsewhere by the author and by others. This new book, which combines photographs from the earliest production efforts with present day shots of cars from notable Corvette collectors, along with Mueller’s research, contributes additional dimension to the Corvette story.

Corvettes sit in a sort of nether world between the guys with gold chains and real car enthusiasts. Despite a long history stretching to drag strip success and road racing victories in places like Daytona, Sebring, and Le Mans, the car’s detractors cite its broad blue-collar appeal as evidence that it isn’t a real sportscar. This is unfortunate, because even the earliest Blue-Flame Special six-cylinder powered Corvette from 1953, with its automatic transmission and white-wall tires was, in reality, more than a match for many of the pukka British roadsters.

Most of us think we know something about the history of the Corvette. That it was GM’s first production experience with fiberglass, or that it originally was provided with a six-cylinder engine and that no plans were in place to power it with a V-8. Other tidbits, like the fact that although Zora Arkus-Duntov is considered by many to be the “father” of the Corvette, the reality that he wasn’t even around during its conception might be new to those of us not steeped in Corvette lore. Mueller, quoting Arkus-Duntov and other sources explains that GM’s legendary vice president in charge of styling, Harley Earl, should get the credit for GM’s new baby. Working for Earl, Bob McLean led a small group of designers developing the concepts in 1952 for GM’s Motorama show that opened at the Waldorf-Astoria Hotel in January 1953. Zora Arkus-Duntov didn’t start working at General Motors until May of 1953.

And here is another tidbit: The frame and suspension for the first Corvette was designed by another GM legend, Maurice Olley. The vehicle dynamics genius whipped up a sturdy frame and suspension system in just ten days, using many in-stock and proven Chevrolet components to avoid the need for extensive testing. This is information that is no doubt available in other places, but Mueller pulls it together in this tightly written package.

Despite their long history sitting atop Chevrolet’s product line, Corvettes have been produced in only three factories. The first 300 cars were built in a makeshift facility in Flint, Michigan in 1953. Production moved to St Louis when it went full-scale in 1954, and remained there until 1981, when Corvette production was relocated to Bowling Green, Kentucky. Building Corvettes in each of these three plants is well documented in the book with detailed black and white and color photographs of workers building fiberglass sportscars.

If Mueller had merely summarized the production facilities, the book would have been interesting to Corvette fans. But by going much further than this he has produced a book that is fascinating even if you have never fallen under the car’s spell. There have been six generations of the Corvette, and each is covered in great detail describing not only how the cars were made and by whom, but providing information about options, colors, special models, accompanied by quotes from contemporary magazine stories. Mueller even tours the National Corvette Museum, located across the street from the Bowling Green factory.

Life has not always been easy for the Corvette. The oil crisis and exhaust emission legislation in the 1970s strangled much of the performance from its V-8 engine. Then a $24.2 billion loss in 1992 for GM had the company seriously considering pulling the plug on its sportscar, even as the 1 millionth Corvette was rolling off the Bowling Green assembly plant in July of that year. But the Corvette survived and the C5 and C6 generations of the car are often mentioned in the same sentences as the best from Porsche and Ferrari.

Posted Under: Automobiles, History, US | Author: Kevin Clemens | No comments yet