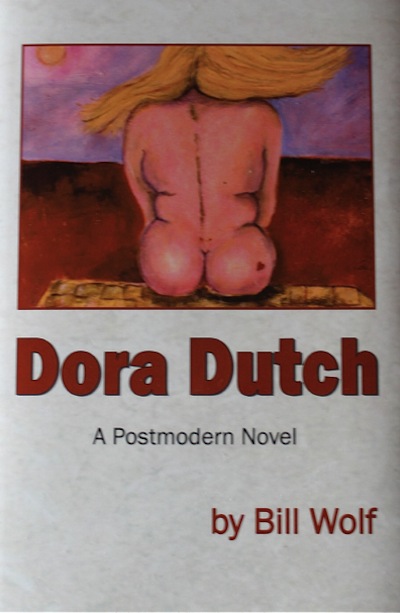 Author Bill Wolf, a noted SpeedReader reviewer, puts it all on the line by writing a postmodern novel about drugs, sex and science fiction, then sending it to SpeedReaders for a review! Now he’s up on the high wire like any other writer, alone, waiting to see which way the wind blows. Is the crowd restless? Is it thumbs up or thumbs down?

My conclusion? Bill’s book is a good attempt at surreal storytelling that needs a plot to keep it intelligible. To oversimplify for the sake of brevity, it seems like there are two stories vying for your attention. The first story is about midgets and potato chips. The second is about a time-distorted science fiction world based on corporate control of light and the resultant populist revolution. These two dominant themes are intermixed throughout the book, but it felt to me as if the search for a plot developed as the author progressed in his writing. It definitely gets rolling toward the end of the novel, reading like Wolf truly has the bit clenched firmly between his teeth and has found his stride as he pounds down the home stretch to the conclusion.

Perhaps as much poet as novelist, Wolf gives us a rollercoaster ride through an alternative reality. In a sort of Jack Kerouac-style the reader is lead through a maze of shifting backdrops and characters, all of whom may be playing out separate versions of their own personalities. It’s hard going if you are used to standard plot development. In the author’s own words, mouthed by one of his characters, “it’s not that I don’t enjoy free form, stoned streams of consciousness, but even Kafka kept a thread of a plot, and Barth was a master storyteller. But this, this . . . .”

At times you begin to despair over slightly overwrought descriptions like this one: “Dawn held with a sour gasp, a few stars lay dying in a cancerous sky, and here and there a blotch of yellow bathroom light hit the low shine of red mercury at the bottom of the thermometer that grasped the zero bars with one hand and rose from a long and icy dip.” After wading through that, Wolf zings you with superb one-liners like: “Time had become like laughter in the wind.” Or: “. . . when winter was a suicide note pinned up on the bathroom mirror.” Even better, “The alarm put its hands on its hips, reared up on rooster legs, and clanged its bell against the bedpost. Morning crashed down like a hunk of steel grating.” Oh, yeah, we’ve all been there.

Again, to quote from the book as it makes an observation about itself, “These stories were to flow freely, a panoramic stream of consciousness but things got out of hand. I have no alternative than to recapitulate, to knuckle down. The characters are buzzing around like mentally deficient wasps. They lack sting, wallop, and power. They never succeed.”

Well, they do succeed in their own way, but that way may not be your way. In my view, Wolf’s prose flows gracefully, but needs rocks in the stream of consciousness to create eddies of plot to maintain reader interest in what’s happening. In short, the story didn’t jump out and grab me like I like to be grabbed when reading a story . . . even a surreal one.

The book itself warns us about Dora Dutch. “Her story’s bound to be mad. Incomplete, a collage.” I think the quote, “a hapless cast made to spread over pages for reasons obscure and unsettled,” says it all. But then again, just when you want to give up, Wolf teases us with an observation like: “There is always someone who will pick up a nearly naked midget hitch-hiking down Seventh Avenue.”

Would you stop to pick him up? If so, this novel could be exactly what you’re after.

Posted Under: Fiction | Author: Bill Ingalls | No comments yet