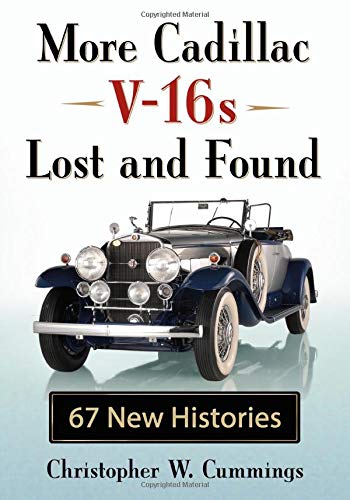 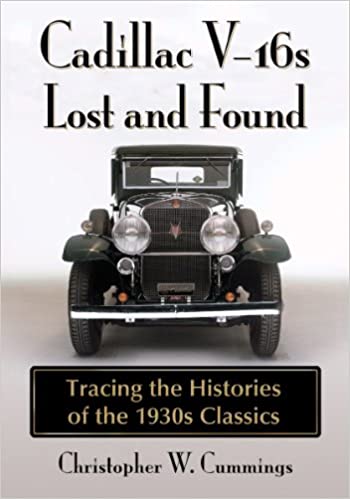 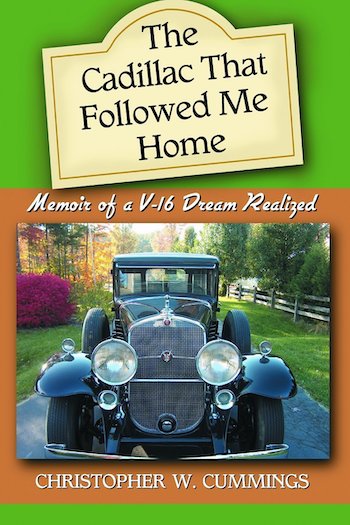 Cadillac V-16s Lost and Found: Tracing the Histories of the 1930s Classics

The Cadillac That Followed Me Home: Memoir of a V-16 Dream Realized

all by Christopher W. Cummings

It would be nice to have a penny for every time someone has said, “Boy, think of the story this car could tell if it could talk!”

Well, some cars can talk—almost—especially if they are unusual or sufficiently valuable or respected. Such is the case with many of the something north of four thousand three hundred Cadillac V-16s produced over the decade of 1930 to and including 1940 as Chris Cummings has proven in his newest book as well as the ones that preceded it; More Cadillac V-16s Lost and Found, his prior book, Cadillac V-16s Lost and Found, Tracing the Histories of the 1930s Classics and his very first book The Cadillac That Followed Me Home, Memoir of a V-16 Dream Realized

As Cummings observed, “The Cadillac V-16 cars . . . were a force. They rivaled even the most opulent bespoke motor cars.” That’s just what the man behind their creation, Lawrence Fisher, who at the time headed Cadillac Motor Car Company division of General Motors, had in mind.

Serendipitous might also be a right word to apply to Cummings’ books for he never set out to write a series. Truth to tell he only dreamed of some day owning one of these sixteen-cylinder vehicles he so admired. How that dream came true was the story he told in The Cadillac That Followed Me Home, Memoir of a V-16 Dream Realized which was published in 2006 by McFarland.

That first book went a long way toward establishing Cummings’ reputation as a writer who verifies the facts and then chooses his words carefully. And as the stories of other Cadillac V-16s came his way, Cummings realized he had to do his part to make those stories (the collector car world refers to them a car’s provenance) more easily available to a larger audience. Thus with all three books Cummings has documented the fate or fortunes of just shy of 150 of Cadillac’s V-16s.

One story/provenance in the third book is particularly notable. Why? Simply because the vast majority of the stories of individual V-16s involve restorations—often multiple times—just as the ownerships usually changed more than once or twice. 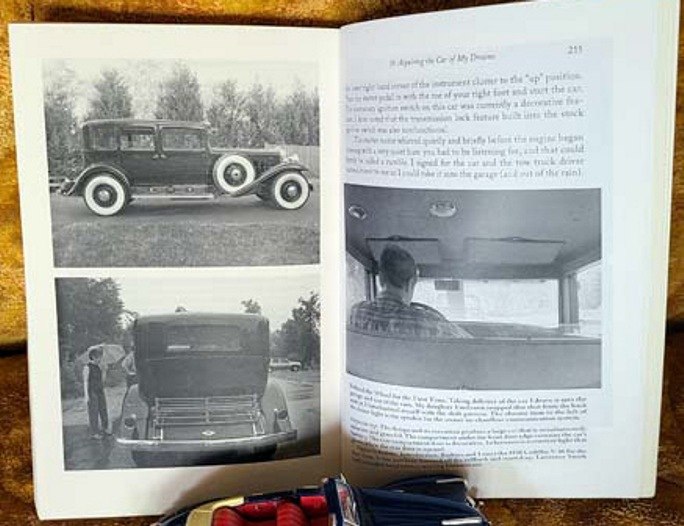 These two spreads are of the 1930 Cadillac V-16 author Chris Cummings was fortunate enough to finally be able to call his own. It is one of only fifty Series 4330’s produced in 1930. A 4330 is defined as a 5-passenger limousine with, as you can see, a divider window. And the man behind the wheel (we see the back of his head) driving his dream is indeed author Chris Cummings. 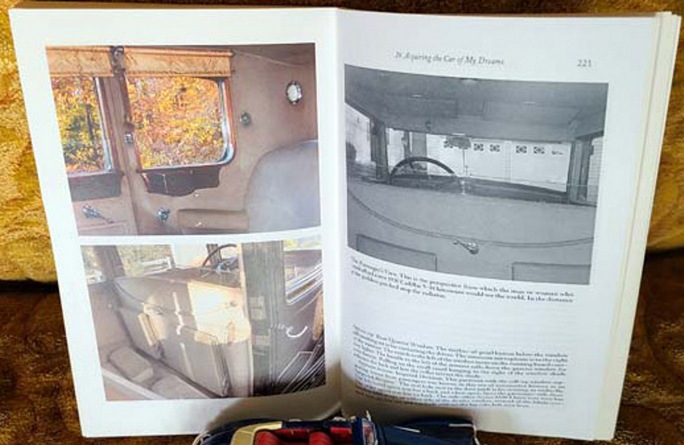 That notable car told about in the third book, More Cadillac V-16s Lost and Found, is the 1938 town sedan that remains today, in 2021, in completely original unrestored condition and still earning trophies. Moreover its history is notable too as It was a special order from Colonel Sam McLaughlin. You may be familiar with the name but, in case not, he was the founder and first longtime head of General Motors of Canada.

Not every vehicle—even a Cadillac V-16—is fortunate enough to be cared for and maintained from day one even while being used regularly. Numerous of the tales involve being parked or stored for prolonged periods. Thus when found again they’ve naturally deteriorated. Sometimes parts from one survivor help make another whole again thus stories can become intermingled. For each of the donors Cummings has done due diligence and recorded, insofar as possible, the specific vehicle by engine number, chassis etc making these books truly a valued resource for historians.

Some body styles offered by Cadillac were never produced and some were more popular than others. Harley Earl was the originator of the Madame X designation apparently to indicate the “unique personality and feel” setting those cars apart as elite “even among the catalog custom cars comprising the V-16 range.” Cummings takes care to enumerate and compare their features to those of their other V-16 siblings. 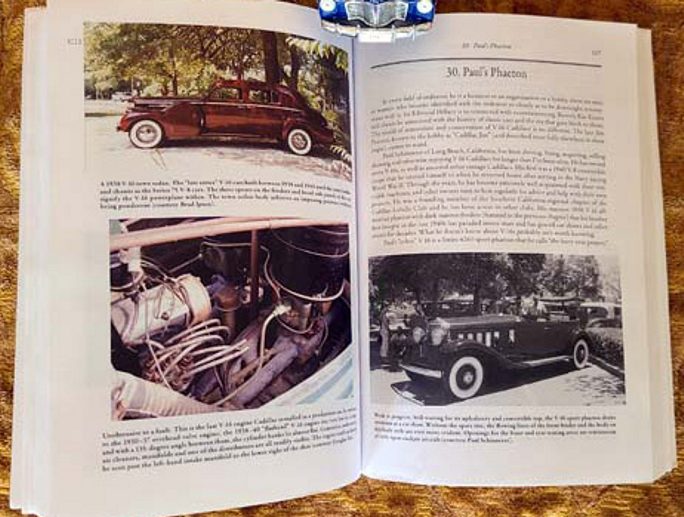 Top left is a 1938 Series 75 which used the same body as V-8-powered Series 75s. The three spears at lower portion of fender beneath sidemount and on the hood sides signify this is a V-16.
Bottom left is the very last sixteen cylinder engine installed in a production car. As you can see it sits low with generator, carbs, air cleaner all readily visible. Car in lower right is a 1930 Series 4620 Sport Phaeton on display as a work in progress as it awaits its interior. 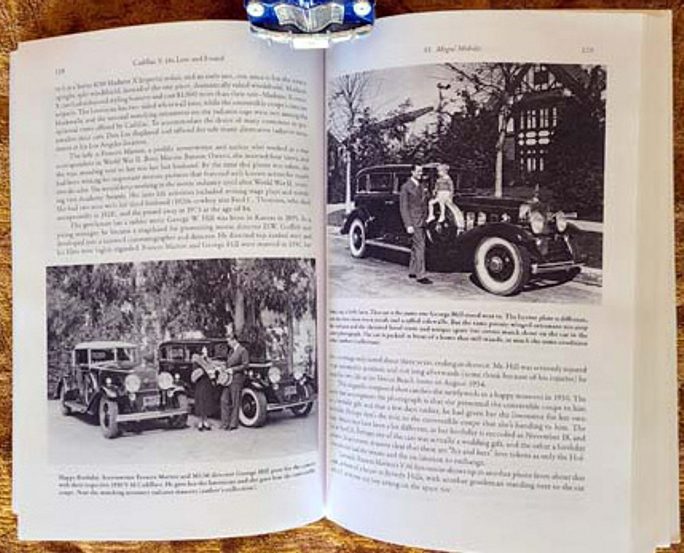 A dialogue regarding the spelling of Madame took place as this commentary was being written as some sources spell it without the concluding vowel. In the ensuing correspondence Cummings explained how he determined it as Madame which is the spelling in all three of his books: “There are a number of reasons; Harley Earl attended a play named ‘Madame X’ and dined with its star telling her that was to be the name of the body style he was currently designing for Cadillac’s V-16s. Also the famous portrait of John Singer Sargent is ‘Madame X’. And, though few, Cadillac’s documentary uses of the name, such as in the Master Parts Book, are ‘Madame X’.” 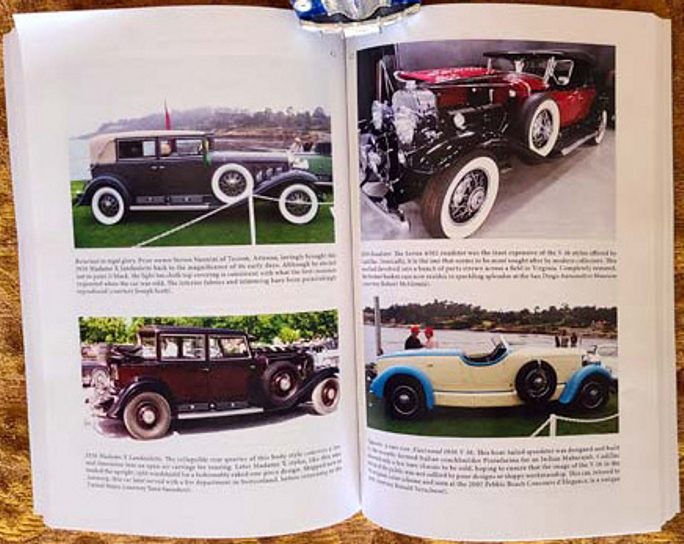 Top left a 1930 Madame X landaulette on display at Pebble Beach.
Bottom left is another 1930 Madame X landaulette but with a collapsible rear quarter.
Top right another 1930 but this a Series 4302 roadster. At one time this car was a “bunch of parts strewn across a field—a basket case”. Today, as you can see, it is a “sparkling splendor at the San Diego Automotive Museum.”
Bottom right is a “rare non-Fleetwood bodied” 1930 that was designed and bodied by Pininfarina for an Indian Maharajah on display at 2005 Pebble Beach Concours. 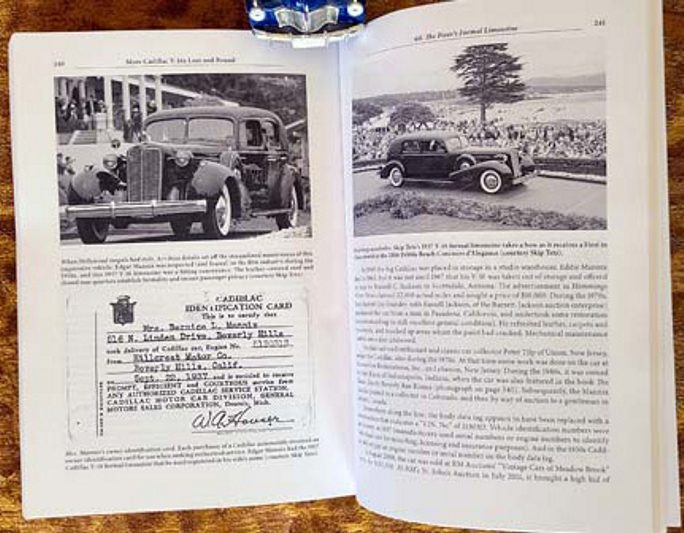 All three books are excellent reading and so packed with information you’ll find yourself returning to their pages to read again. Finding specific information is made easier as each has an excellent index and the latter two also have bibliographies. Additionally all three are footnoted where and when appropriate and well-illustrated. We can but hope that sufficient new, additional information might one day warrant a fourth volume.

Cadillac V-16s Lost and Found, Tracing the Histories of the 1930s Classics

The Cadillac That Followed Me Home. Memoir of a V-16 Dream Realized