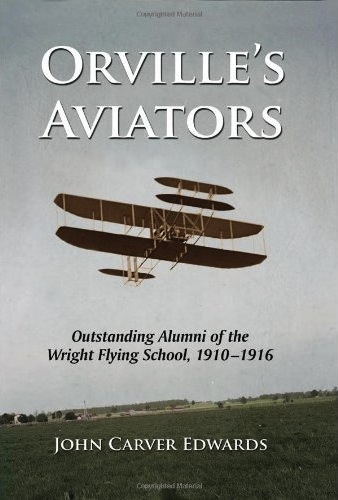 “By today’s standards their labor may seem hopelessly rudimentary and their machines downright primitive; but for them, every day dawned as a learning experience and, more important, as an adventure.”

Kitty Hawk, North Carolina is the location that has so lastingly become associated with the Wright brothers’ aviation triumphs but Greene County, Ohio is where most of the actual development and flying—and training—took place, specifically Simms Station, a stop on the Dayton, Springfield & Urbana Electric Railway, and Huffman Prairie Flying Field in Fairborn, named after Dayton banker Torrence Huffman who provided the land.

First utilized 1904–05, it was a multitude of activities, engagements, and complications that kept the Wrights away until 1910, the beginning of the period this book examines. These were busy years, not just for the Wrights but for aviation all over the world. In fact the reader new to this topic would do well to have a general timeline or history book at hand. Because of this book’s narrow focus there is rather too little overall context provided to better appreciate this particular slice of time, and the Preface and rather good Introduction can only go so far. One might say that even the reader who is already familiar with Wright Bros. history would benefit from a more fleshed out treatment of the business side of the Wrights’ activities—a veritable case study in being good at one thing but not another. That said, lots of other books cover that ground, and this book contains an extensive bibliography.

The Flying School was one such effort to create sustainable growth for their products: what’s the point in building the hottest thing on the block if no one knows how to use it? In six years of operation 119 “birdmen” got their wings; six of them are presented here. It is probably the choice of words in the subtitle—“outstanding”—that prompts the author to make an effort, especially at the beginning and end of the book, to justify his selection of these six men. His whole point is that all the students, by virtue of having chosen this profession, are similarly outstanding. Whatever differences there were when they entered school became irrelevant as they progressed (and survived!) and over time achieved commonality of purpose and basically similar skills. Of much greater interest to the astute reader would be an explanation from the author why he didn’t feature at least one of the three female alumni who are mentioned only in passing. It cannot have been a lack of source material; the sheer novelty of a female flyer would have resulted in voluminous press coverage.

Carver has written about one of the people in this book before, a biographical novella about Howard Rinehart (Flying for Orville, 2004, ISBN-13: 978-1594572104). As a professional archivist (University of Georgia, retired), data mining and source evaluation must be second nature to him. This book contains many useful things—and it also omits or only barely touches upon many useful directly related things. Considering the author’s familiarity with the subject, this is surely by choice and not oversight. Or maybe the book had to be held down to a certain length. Whatever the reason, the brevity is unsatisfactory. For instance, it’s nice to be told that “tuition rose to $500 in 1912.” But it means nothing without knowing what it was before. And what else could you buy for $500? (A 1912 Model T cost $690–900.) We learn that tuition was halved for those students who later bought a plane. But how much was an aircraft? ($5000) Or: there’s no map of Huffman Field, or scale drawings or even photos of the 15 different Wright aircraft one of the Appendices so carefully enumerates. It would also not stretch the imagination to think that a book about a particular flying school might devote a few words to the existence of other schools. The lack of such connect-the-dots kind of detail doesn’t diminish the quality of Carver’s research, it just does not enable the inquisitive reader to advance.

Students Welsh, Gill, Freeman, Bergdoll, George Gray who had a pilot wife Edith “Jack”, and Rinehart are followed through their training regimen and subsequent aviation-related activities. In most cases this involved much more than merely flying duties but education and promotion: “spreading the gospel of flight” required not just good airmanship but people skills and charisma. Among the several defining characteristics of these six, and the 113 they represent, is an almost unimaginable courage, if that’s the word, to willingly seek out an activity that killed people left and right and could hardly be said to pay very well. The book does not really examine their motivation, probably because the primary sources from which Carver worked don’t speak to that. There is, however, a wealth of biographical tidbits, from youthful indiscretions to thoughts about their teachers and colleagues to, occasionally, a fear of flying (“It’s but a question of time . . . I’m going to quit before it gets me.”—Howard Gill). Lots of quotes and excerpts from letters allow people to have their own voice and the various newspaper clippings reproduced here convey what their contemporaries had to say about them.

Also appended are a 1920–48 Wright timeline and a student roster. Index.

Race to the Sky: The Wright Brothers Versus the United States Government »
« Hot Rod Model Kits