50 Years with a Rolls-Royce Twenty 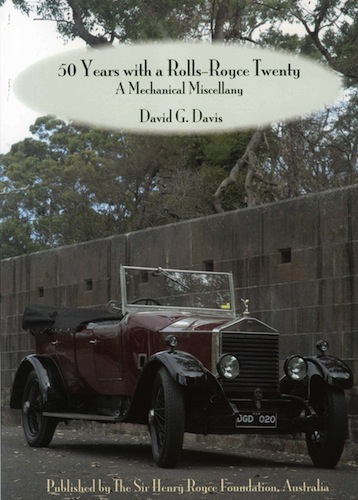 This is the remarkable story of a 1922 Rolls-Royce Twenty (chassis 42G1, one of the oldest surviving cars) in virtually continuous use since new in Australia. More to the point, it’s the story of a continuous maintenance program from 1959 onwards. When author Davis bought the car in 1959 it became his everyday transport for many years.

He was fortunate to have the advice of the late Bert Ward, the legendary Rolls-Royce engineer. Ward had trained under the official company representative B.A. Peat from 1916 and later formed a partnership with Alf Appleby. Both Peat and Appleby were apprentices during Royce’s time at the Rolls-Royce Derby works pre-1914. So the maintenance Ward suggested to David was broadly Royce’s own approach: if it ain’t broke don’t fix it, and if you have any work done do it to the highest standards and don’t skimp. During its continuous use, especially after various prewar accidents, it has had two replacement chassis frames and four bodies. David had all major work done by Ward and his successors. Today Alf Appleby’s grandson has in turn followed his father to maintain the car, quite a record.

The maintenance notes and observations in this nicely produced booklet guide the non-technical owner through the best approach to routine maintenance and good driving techniques. All of the advice is drawn from Ward’s approach to getting the best value out of a car, and when you’ve owned and driven one car for 50 years, as Davis has, you build up unrivalled experience. He guides the owner through problems large or small, serious or just irritating, so that the non-technical can have confidence in mastering such a charming car. The advice on technical issues refers to his own 3-speed early chassis but much of it applies to the later cars as well. A detailed list of chassis changes was compiled by Bob Clarke, the Australian club’s Twenty Registrar.

The booklet combines philosophy, anecdote, history, and practical engineering to make an inspiring story. How many Rolls-Royces from the 1920s are there that can claim such a continuous record of use and a matching record of maintenance? Highly recommended. Index.

Davis these days is also a trustee of the Foundation that publishes this lovely booklet; he financed its publication out of his own pocket and donates all proceeds from sales to the Foundation.

50 Years with a Rolls-Royce Twenty