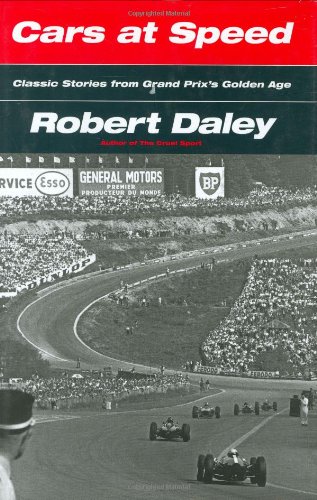 When this book originally appeared in 1961, published by J.P Lippincott, a copy set you back $5.95. This was not a book that War Babies and early Baby Boomers could easily pry loose from the local bookstore, assuming that it carried it in the first place. That $5.95 was a lot of money for a book, whatever the topic, in 1961.

When the paperback edition was released in 1962 by Collier Books, it cost 95¢. Paperbacks usually ran anywhere from 25¢ to 50¢ so this was one expensive paperback. And not many places carried Collier paperbacks, certainly not the usual outlets such as drugstores, grocery markets, or the vast majority of newsstands. Perhaps the book department in some of the “better” department stores or the relatively few bookstores that carried “quality paperbacks” (such as those published under the Vintage, Dover, or Grove Press imprints) might carry it. The hardbacks were sold by Robert Bentley or Autobooks via advertisements in Road & Track, Car and Driver or Sports Car Graphic.

Fortunately, the Capitol Newsstand, then located on Huger Street just before its move literally around the corner to its new location on Main Street, carried Collier paperback books. This was something of a miracle considering that this was both the early 1960s and Columbia, South Carolina, scarcely a hotbed of intellectual fervor back then. This newsstand also carried Paris Match, Autocar, Evergreen Review, Der Spiegel, and The Village Voice, defying any sense of the usual notions or expectations of such places.

After devouring the copy of Cars at Speed in the Richland County Public Library, alternating checking it out with several others, I chanced upon its miraculous appearance at the newsstand. Those 95¢ plus sales tax meant that purchasing the book would eat most of of the dollar and change that I had to spend. One paperback that cost the same as two required some serious prioritizing of the books I was hoping to purchase. They had only one single copy in stock so that pretty much made the decision for me.

I still have that Collier paperback from the Capitol Newsstand. That’s how good this book is.

In time, I also got myself a hardback, just to have a back-up.

Arthur Daley, the author’s father, was only the second sports columnist in the history of The New York Times, winning a Pulitzer Prize for his work in 1956. Robert Daley (b. 1930) graduated from Fordham University in 1951 and then spent time in the Air Force during the Korean War before following his father’s footsteps into the sports world, initially working for the New York Giants football team before becoming a foreign correspondent for The New York Times for six years, being based in Nice and then Paris. Cars at Speed: The Grand Prix Circuit and The Cruel Sport (1963, reprinted 2005) were produced during Daley’s stint with the Times.

Daley then turned to writing novels and other works of nonfiction, as well as spending time as a Deputy Commissioner with the New York Police Department heading their PR department. This resulted in two books, Target Blue: An Insider’s View of the N.Y.P.D. (1973) and Prince of the City: The True Story of a Cop Who Knew Too Much (1978), the latter about undercover cop Frank Serpico becoming involved in the anticorruption investigation of the NYPD and later being made into the movie, Serpico directed by Sidney Lumet and starring Al Pacino.

Cars at Speed and The Cruel Sport were the only books that Daley wrote about automobile racing, both appearing within just a few years of each other. When Cars at Speed was reprinted, it was as it originally appeared in 1961, with no updates or additions, only a new introduction by Daley. However, something was missing, the photo on the dust jacket by Jesse Alexander of Juan Manuel Fangio looking at the camera while driving a Maserati 250F in what proved to be his last GP race (July 1958 Grand Prix de l’Automobile Club de France). It might be suggested that many copies of the book sold simply on the strength of that dust jacket! The image is one of the few that may truly be called “iconic,” a term that has been much overused in recent years. The dust jacket for the reprint features a photo that seems, by comparison, a tad odd because it features the 1962 edition of the Belgian GP—which isn’t even from the period the book covers (it ends in 1960). Perhaps this is another case of editorial or marketing folks just not really grasping what their book is about.

The dozen chapters of Cars at Speed are really journalistic vignettes covering subjects beginning with an account of the Mille Miglia and its end as an open road race in 1957, due to the crash that killed so many spectators, a number of them children, as well as the driver and navigator of the car, a Ferrari: Fon de Portago (Alfonso Cabeza de Vaca y Leighton) and Ed Nelson, respectively. Juan Fangio, Rudolf Caracciola, the Targa Florio, the French Grand Prix, the British and their recent arrival on the scene as a major factor in Grand Prix racing, Monza aka “the Death Circuit,” the Le Mans 24-hour race—the Grand Prix of Endurance, and the “Quiet Americans”—including such interesting American drivers as Harry Schell—now finding their way in the Grand Prix world.

These vignettes are well written and contain just enough nuggets (or at least the suggestion of a few flakes) of facts as to have the ring of truth. The invented quotations and the other liberalities with facts are typical of the writing produced by journalists writing about sports in that day. That said, however, Daley does an excellent job of capturing the atmosphere, the sweep, the zeitgeist, even some of the context of both the period and the sport.

It should be noted that the “sport” being described was really an alien one to most of the Americans reading Daley’s work. While much of Cars at Speed does focus on Grand Prix racing, it is really about road racing, including sports car racing, such the Mille Miglia, the Targa Florio, and Le Mans, in Europe – by way of a few detours to Argentina and the United States, Sebring being the American contribution to the circuits.

I will not use the term “classic” to describe Cars at Speed for the simple reason that while “iconic” certainly has been overused and much abused, it far worse when it comes to the word, “classic.” When everything is a “classic,” nothing is a classic. What I will suggest is that those with an interest in how Grand Prix and sports car racing in the era of the late-Fifties and early-Sixties was seen through contemporary eyes, especially those of an American, than Cars at Speed is certainly worth reading and placing on the bookshelf. Along with The Cruel Sport, one may suggest that Cars at Speed still influences the thinking, the perceptions, of more than a few writers within the sport as well as more than a few fans and enthusiasts, whether they realize it or not.