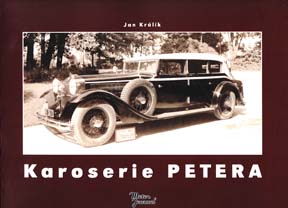 (Czech and English) Petera is not the first name that springs to mind when one thinks “coachbuilder.” However, this Czech firm was one of the most important coachbuilding firms in Central Europe from 1908 to the late 1970s, first making horse-drawn vehicles, sledges and hearses, then automobiles, trucks, coaches, and even gliders during World War Two. In later years, it was closely associated with Skoda. No wonder then that this book was written by a Skoda expert, Jan Králík.

The book covers the whole history of the firm and is illustrated with hundreds of black & white photos from the factory archives. The text is reduced to a minimum—about 18 pages in Czech, the contents of which are translated in English on the last 11 pages. I admit it really helps!

The book is divided into eight main chapters, followed by a genealogy of the Petera key family members and an Epilogue. Chapter 1 briefly covers the geographical environment of Vrchlabi, Petera’s home town, with photos showing the city from a distance and the main buildings. Chapter 2 deals with the history of the Petera family. Ignaz Theodor Petera was born in 1840 in Pecka. He founded his coachbuilding firm in 1864, making horse-drawn vehicles, including sleighs, elegant ”Mylords,” various charabancs, and mail coaches. By the turn of the century, the firm counted only 20 workers, but the automobile was going to change that. Unexpectedly Ignaz Theodor died of pneumonia in 1904 and the business was taken over by three of his sons.

Subsequent chapters describe and illustrate the first automobiles produced as of 1908 by Ig. Theodor Petera & Söhne (he had 5 sons and 7 daughters!) and production up to 1918. It is interesting to note that there were very few differences between the design of those bodies and their equivalents in any other European country. All of them being an evolution from the horse-drawn carriage era, it’s not surprising to see Roi des Belges tourers and 2-seater phaetons in Petera production books. Also described are the techniques used by the various craftsmen employed by the factory, and I found it very informative both from a technical and also from a social point of view because the working conditions and wages are dealt with in detail.

The inter-war period is the most interesting and most extensively illustrated part of this history. This chapter is entitled “Basking in the Sun,” which can be taken both literally and figuratively. Petera made bodies for quite a number of car manufacturers: the local RAF, Tatra, Praga and Skoda of course, but also Renault, Citroën, Peugeot, Bugatti, Lorraine-Dietrich, Minerva, Mathis, Hotchkiss, Hispano-Suiza, Isotta Fraschini, Fiat, Lancia, Mercedes, Audi, Benz, Brennabor, Austro-Daimler, Adler, Steyer, Opel, Wanderer, Stoewer, Walter, Terraplane, Buick, de Soto, Willys-Knight, Chrysler, Packard, Studebaker, Oakland, Chevrolet, Hudson, Nash, Ford, Plymouth, Pierce Arrow. They all sported the characteristic integrated headlamps. All these marques are illustrated in the book.

This list clearly shows that Petera was not at that time the obscure coachmaker we might think he was. I confess I had never heard of the firm until I bought this book, and I only did so because the advert claimed Petera had built bodies on Rolls-Royce chassis—my field of research, but unfortunately nothing in the book supports this claim.

The period pictures are of good quality but the paper itself is not as glossy as it should be. The range of body styles and marques is exceptional. Almost all the photos are identified by marque and model. The fact that chassis numbers are not shown is an indication that production was important and that most pictures are only there to illustrate a typical body mounted on large batches of similar models. Interestingly, Petera built coachwork for everything that moved on wheels, including gliders (!) because Germany was not allowed to manufacture powered aircraft after World War One.

The book shows how the firm fared after the German invasion and during the second world war, building gliders, ambulances, and all kinds of transports under German orders. The 1945 nationalization of all manufactures that had worked for Germany brought an end to Petera as such but the factory continued to churn out trucks, coaches etc. but mainly Skoda cars. The final chapter covers the modern period up to the Skoda Octavia of 2008 still built in the original Vrchlabi factory.

Although this book did not contain any Rolls-Royces, I do not regret buying it. The full-page photos are spectacular. The choice of body styles going from 1908 to recent times gives a good account of what could be seen on Central European roads, but the most surprising fact is that I couldn’t find a single English car in the book . . .

Posted Under: Automobiles, Multilingual / Not English | Author: Andre Blaize | No comments yet