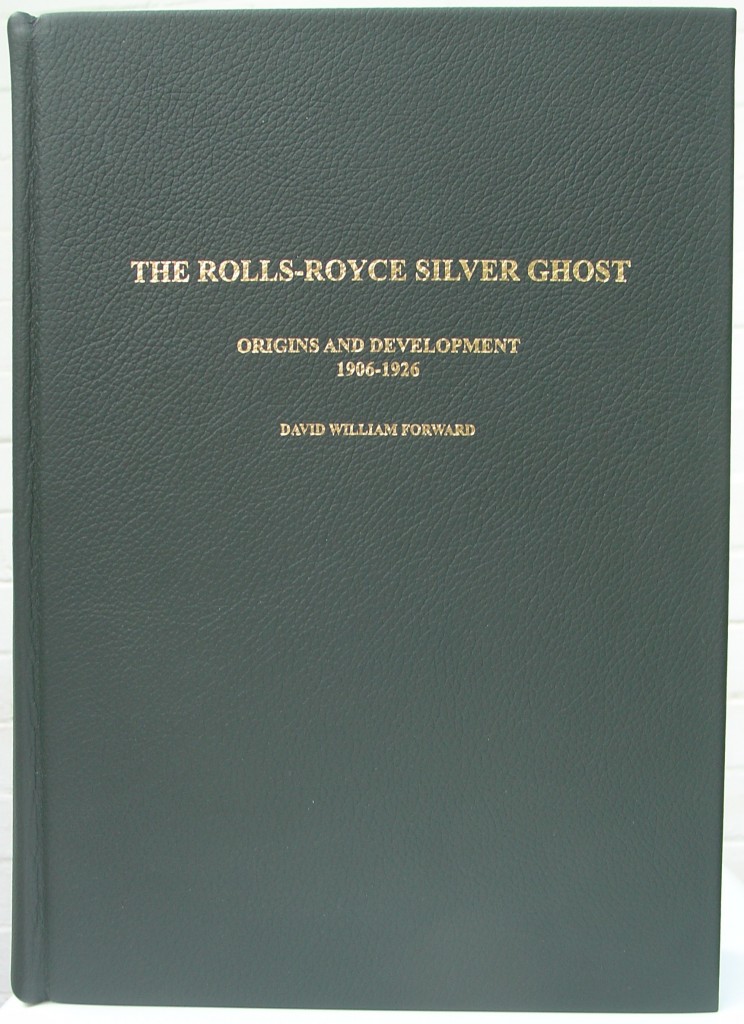 David Forward is a retired educator with a PhD in Musicology. Restoration of his Springfield-built Silver Ghost showed him what an amazing mechanical creation it is and inspired him to write this book. Using disciplines of his academic background, he reviewed and analyzed an extensive selection of published Silver Ghost material along with conducting his own independent research. The resulting book is monumental in its scope, yet presented in a witty, succinct, thought-provoking and authoritative manner. It can truly be described as a Magnum opus.

The first of its three parts covers, in 122 pages: the design of the initial three Royce cars; the 10, 15 and 20 hp cars; the 30 hp and V-8; pre-Silver Ghost body types; 1904-06 company policy and production, and a summary. The second part covers, in 177 pages: engine basics and design; variables affecting engine output; weight and power comparisons; description and appreciation of the various model types; comparison of Silver Ghosts built in Britain to Ghosts built in America; and the years before, during and after World War One.

Part Three covers the sporting Ghost; the luxurious Ghost; judging and competition; coachwork types; coachwork practice; enjoying your Ghost; custodianship, and modern times and roads. The final 90 pages are appendices which describe the findings from a survey of owners; series numbers and dates; parts books, handbooks and documents; clubs, and chronologies of Henry Royce, Charles Rolls, and Claude Johnson. There is an index recording chassis numbers, models, and text.

This book is elegantly written, profusely illustrated, both scholarly and entertaining, making it required reading for anyone interested in Rolls-Royce history in general, and Silver Ghost information in particular. The publication of the book—which was initially available only on a pre-subscription basis—was preceded by excerpts appearing as articles in some enthusiast magazines in order to provide prospective book purchasers an indication of what to expect. The book appeals especially to recent and long-term Silver Ghost owners, but also those aspiring to be owners. It should be obligatory reading for anyone contemplating restoration, body-building, modification, or sensitive preservation of these cars, who, the author notes, are nominally owners, but actually the custodians of these remarkable creations. The author notes that he is hopeful readers of his book might be motivated to record their own expertise for the benefit of future Silver Ghost custodians.Your reviewer believes that this book will join the ranks of the several revered Rolls-Royce references. Books like this are written out of a desire to share information, not to make a profit. It is for this reason that the Sir Henry Royce Foundation Australia has underwritten its production, hence the reasonable price. The limited, numbered edition of 500 will almost certainly become a collector’s item. All of the initial subscribers are listed in the first—and so far only—edition.

At the time this review was adapted for posting here, inquiry indicated that only a few of the clothbound editions are still available. However, the author of the book is entertaining expressions of interest regarding either reprinting or a second edition.

Edited and adapted with permission from a review originally published in the May/June 2007 issue of The Flying Lady, the periodical of the Rolls-Royce Owners Club (RROC/USA. Gillings, a former professor of dentistry, has for decades cared for and worked on one of the oldest Silver Ghosts in Australia.)