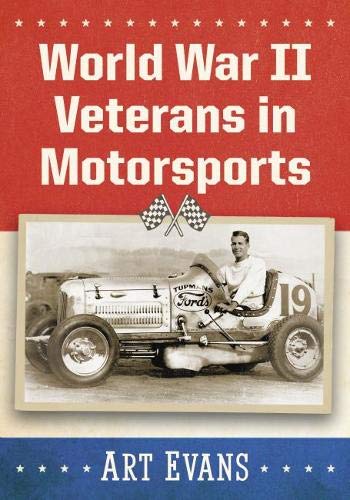 This is a very personal book for, without exception, each of those who the author has chosen to profile—in addition to being motorsport achievers and having military service in common—were also a personal friend of author Art Evans. Thus, not surprisingly, a good bit of his own life experiences and accomplishments make their way into the narrative as well.

This is by no means Evans’ first book. Over the years he’s written and self-published or had published something north of 20 titles. Some are about his craft as photographer. Others are about people, names and titles include John Fitch, Carroll Shelby, Ken Miles, and Bill Devin. Then there are the historical remembrances of events and places with titles such as: Pebble Beach Remembered, Torrey Pines Remembered, Paramount Ranch Remembered and more. Each example is a compilation recounting the various road races at those storied venues. Included were stories about both the personalities and their machines that ran the events.

Especially that latter category of Evans’ books are trusted resources for the automotive and racing historian because not only was Evans there—sometimes as a participant, others as a photographer, still others as the organizer—but because he retained the documentation (programs, race results, clippings, etc) from those places and events and used them, including page reproductions, to create his own titles.

Included are people with names that resonate like Carroll Shelby (US Army bomber pilot who turned anything motorsport-oriented into a success), Paul Newman (USN bombardier, and gunner turned famed actor and racing driver), and Steve McQueen (USMC’s “bad boy” who learned, which later enabled him to serve as part of President Truman’s yacht Honor Guard, and still later famed actor and motorcycle/car racing pilot).

Others, to name a few more, are Rodger Ward (Army P-38 pilot, then later Indianapolis and Stock car racing champ), Sam Hanks (US Army Air Corps officer, later Indy 500 winner) and Bill Stroppe (USN CPO serving aboard ship in the Aleutians and South Pacific and destined to become a key, but independent, cog in FoMoCo’s racing program) and numerous others in between.

For each chapter Evans secured several well-chosen images to illustrate, with at least one of those images his own portrait photo of the person.

The book’s stories easily engage the casual reader. But Evans’ words are also of real worth to researchers and motorsports historians because of the added information he is able to incorporate from his own firsthand relationship with each he has chosen to write about.

Publisher McFarland is always attentive to details such as including both a bibliography and a well-compiled and organized index that nicely complement the author’s own efforts.

Swedish Coachbuilders – A Story of Craftsmanship »
« The Other Bentley Boys