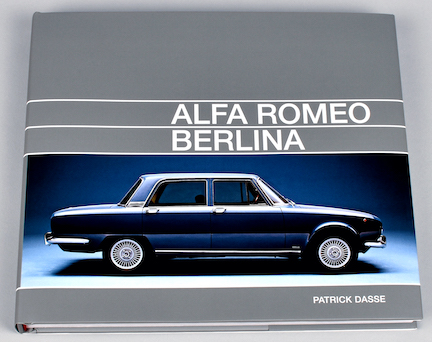 “Alfa Romeo had a single department, the ‘Direzione Assistenza,’ which was responsible for the documentation relating to the vehicles. . . . In the years from 1962 to 1972 alone the department completed over 1000 such documents and catalogues. This documentation formed the basis of my research; without such an excellent source of information my research would not have been possible.”

(English/German) It is not often that a book about Alfa begins with praise for the company’s record keeping. That said, things are not all that straightforward and you really need to read the Foreword and Introduction to this book to appreciate its methodology and also Alfa’s basically arbitrary and certainly inconsistent conventions for numbering car series and the models/variants within them. (A good example: in the case of these 1967–1976 Berlinas the automatics in the 1750 line are treated differently in terms on VINs and type designation than the 2000.) The author has gone to some trouble to explain all this but if you skip it you’ll find yourself complaining for no good reason. 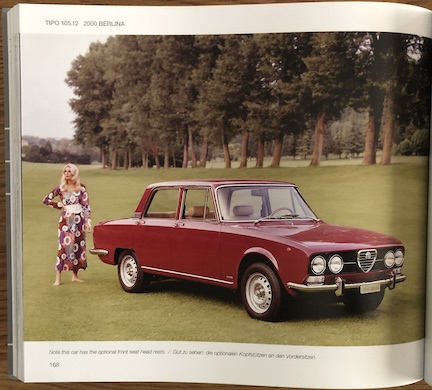 Unless the model is really petite, this is quite a big car!

If the cover car looks like a stretched Giulia 4-door, you’d be right. For competitive reasons, being able to offer a 4-door saloon (Italian: berlina), especially a really roomy one, and especially in that era, was vital to Alfa and the 105 Series chassis had been specifically designed to be scalable to suit specific body styles and performance parameters. Just look at the length of the rear side glass and the rear overhang to gauge how much longer this car is than a Giulia.

If this is your first encounter with Patrick Dasse’s Alfa books you need to know that this is volume 8 of a set entirely and solely devoted to the Tipo 105 series. There will be a 9th book, about all the RHD models across the entire series, and that will be the last. But Dasse has more Alfa books to get out of his system, so stay tuned.

While each is a stand-alone book they are connected in the same way that the 105 cars are connected to each other: to better understand the Berlina covered in this book you’ll want to also know about its siblings, and also the Alfa plant in which they are made, and even the racecar distant cousin. The Foreword in each book is in some measure common to all books but each is customized to the one car (and its variants) any one book is devoted to.

Unlike today, station wagons were pretty much standard issue in the 1970s, both in the US and in Europe.

Doesn’t the guy on the passenger side look familiar?? Yes, that’s Muhammad Ali shoehorning himself into a 105.12.

The other thing to know is that these books are first and foremost repositories for period photography, mostly direct from the Alfa archive and Alfa-related publications, such as Quattroruote magazine. Moreover, most of them have never before been published—a staggering thought considering that each Dasse book contains around 200. Many stages of car production are shown, accompanied by a plethora of close-ups of mechanical or trim bits, the odd piece of promotional material, and of course, if suitable or usable photos are available, every variant of the model. Berlina aficionados will, for instance, savor photos of the lovely Pavesi-bodied estate wagon or the “Mille Miglia di Montagna” rally car—and decry the absence of interior photos of the 1750 automatic whose center console would obviously be unique (the 2000, however, is shown).

An automatic! One the one hand an anomaly for a sporty marque like Alfa, on the other hand the big-car market pretty much demanded it. This page is a good example for making the point that the reader must always be an active participant in reading and learning: this page says that the Tipo 105.54 2000 Berlina Automatic was released to the market in 1972. But don’t start any bar fights with this nugget—appended is a table of production figures that shows there was ONE 1971 model, presumably a pre-production mule. While both 1750 and 200 automatics are relatively rare, many readers will probably not have realized that the total for the former amounted to only 253 and 1076 for the latter.

If you speak fluent Berlina, expect to find coverage of:

What text there is is brief and focused on specs, VINs, and differences year over year or model to model. The latter would ordinarily include consideration of different markets but this book concentrates on home market (i.e. Italy) and US models. Oddly, while the US was a supremely important market to Alfa, Americans just did not take to the Berlina.

If only Photoshop had existed in the 1970s Alfa could have saved themselves the trouble of cutting away the entire B pillar just to show the full sweep of the interior.

It is a roomy car, especially in the rear, but still hardly the lap of luxury.

The photos are reproduced with quite uncommon fidelity, captioned in good detail, and printed on good paper. In every regard the books are a joy to handle and the full set is an impressive sight on the bookshelf.

Not to dissuade the casual reader but a book like this is really best suited to the archly committed owner or restorer, or the completist (hey, this is not a jab—even though some of those folks never even take the shrink wrap off). Only 1000 copies are printed so there’s not many to go around anyway. (The publisher is prepared to do reprints if/when the time comes.)

“Quattroruote” magazine and the Istituto Sperimentale flogged a 1750 Berlina over hill and dale for a 1000-mile test.

One day we will run out of ways of saying that it is as remarkable that Dasse isn’t getting tired of doing such niche books as it is that people keep buying them. How does he do it, you wonder? For one, he has the luxury of presiding over his own publishing house and can indulge his passion. For another he has a clear sense of purpose: he is producing the books that he as an owner and enthusiast would want to have but that simply don’t exist. Dasse is always quick to give credit to the support of Alfa’s Dr. Marco Fazio who was the chief of the Centro Documentazione and also to the Quattroruote staff but it is just as clear that Dasse’s commitment to the cause must have made a mighty good impression on them to share their resources so freely.

Efforts such as this must be cherished, and the best way you can do that is by opening your wallet!