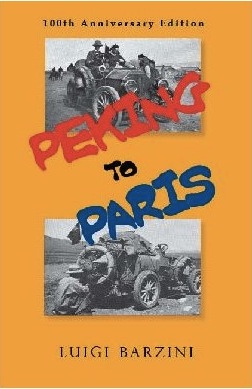 I had long wanted to read this book. But, since it was published in 1908—well, finding a copy either meant, if it was in nice condition, it cost more than I wanted to spend, and if affordable, wasn’t in very good condition. But now, thanks to a 100th Anniversary reprinting of Peking to Paris by Luigi Barzini by Demontreville Press, I’ve not just read this book—but thoroughly enjoyed every page.

Luigi Barzini was a newspaper reporter by profession and war correspondent, but more than that—as this book attests—he’s a terrific storyteller with a terrific story to tell. Barzini was along on every one of the over 8,000 miles, crossing two virtually roadless continents in 1907 from Peking, China to Paris, France in a 1907 Itala, along with the car’s owner Prince Scipione Borghese and mechanic Ettore Guizzardi.

You, the reader, get stuck repeatedly in mud, or at the foot of seemingly insurmountable obstacles and have to find your way out along with Borghese, Ettore and Barzini. You fall through a bridge, nearly to your death. You feel the frustrations at communicating with those who speak languages other than those the already multi-lingual Barzini and Borghese know. And you’re parched and burned by the sun right along with them crossing the Gobi desert and the Mongolian prairies.

But you meet marvelous and interesting people too who, despite language and cultural differences, show great character, hospitality, compassion and spirit. Many had never heard about, much less seen, any motorized vehicle. Rural Chinese decided that somehow a horse had been captured and shut into the internal parts of the car in order to move it. But, “the thing in the car which most strikes the mujik’s (Russian peasant) eye is the thickness of the (pneumatic) tires, and he insists upon attributing to them the wonderful secret power which makes the car move…The Chinaman’s mind is given to abstractions, the Slav mind is simple; the former imagines more than is necessary, the latter less.”

These days, with the instantaneous communications of the internet, skype, and the like, it is particularly striking to read Barzini writing, after he’d been able to send off, via a remote telegraph outpost, his dispatches reporting on the race’s progress to the Daily Telegraph in London and his own Corriere della Sera in Italy, “There is something so great in these human victories over time and space by means of wires and sparks that there are moments when the soul even of a journalist, most accustomed of all to the marvels of speed, is overcome by a sense of wonder and of pride.”

Numerous times those “victories” were prefaced by frustrations that, from the way they are related, were humorous to the writer even as they were occurring, as they are to us reading. The most hilarious took place nearly at the end of the 41-day crossing of Russia. The first delay of two hours was precipitated by the telegram not being in Russian. (It was written by Italian Barzini and being sent for publication in his Italian newspaper!) Four hours later the telegram still hadn’t been transmitted; this time because the sending telegrapher had deemed the missive overlong. Another four hours passed, and yes the telegram had been sent but, “The telegraph clerk wants to know whether the words should be read going down the page, one under another, or across it from left to right.” You guessed correctly, it had been sent letter by letter, from top to bottom and so had to be resent yet again.

Barzini knows machinery and the machine he’s riding on well too. He weaves this information with skill into the narrative so as not to bog down the tale-telling. And that turns the book into one that can be enjoyed equally by the entire family, not merely the car-centric person in the household. I chose to read with a National Geographic Atlas open to the pages with the lovely oversize maps of the Asian and European continents nearby and thus gained additional visual input beyond what Barzini’s words convey on the pages of this 100th Anniversary Edition of Peking to Paris.