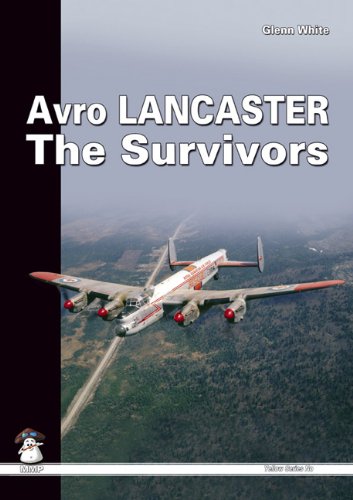 “During this time she [FM104] not only suffered as a result of the weather but she was also at the mercy of vandals. At one point in the early 1970s she even became home to several ‘hippies,’ using the bomb aimers escape hatch as the toilet.”

Written by someone who clearly knows his way around a Lanc this book is also clearly directed at readers who do too and will therefore not struggle with the brevity of the presentation (in terms of context or background) and the lingo (for instance specific items of equipment, WW II-specific issues etc.).

It is also useful to realize that the book is written by someone who is invested in the restoration of warbirds and who wants to commend this activity to a wider audience. The quote above speaks to the difficulties of properly housing a 30 ton aircraft with a 100 ft wingspan. That so few survive of over 7300 built (of which “only” 4000 were lost during the war) has to do with the Lancs’ postwar utility that saw it remain in service in some places into the mid-1960s until there was just no life left in them and they were scrapped.

Nothing has changed in the number of survivors presented here—17 known complete airframes—since the book was first written in 2010. Those are the ones that are being actively preserved/restored and do not include incomplete aircraft or known wrecks that remain unrecovered at this time. The survivors are presented in alphabetical order by country: Australia–the author’s home (2), Canada (8), France (1), New Zealand (1), UK (4), US (1).

A 10-page summary detailing the Lancaster’s development briefly touches upon its predecessors, especially the Avro Manchester bomber that was beset by so many problems that largely stemmed from bad planning and procurement, and even more briefly touches upon its civilian (the Lancastrian) and freighter versions (the York). All of these subjects are covered quite well in the literature and here serve merely to give some context.

The detailed descriptions of the survivors offer basic service history, how and why the aircraft came to be at its current resting place (NX664 having a particularly colorful story because it had been abandoned after a crash landing and had to be hacked out of the jungle decades later), and the state it is in presently. Modellers who on the one hand would benefit greatly from not only the many detail shots but especially the behind-the-curtains look afforded by photos of disassembled or destroyed bits need to be cautioned that restored aircraft have a certain Frankensteinian aspect in that they are cobbled together from whatever parts—even from different aircraft and certainly from different marks or variants—are still available or affordable nowadays. This too is why this book was written in the first place: to encourage readers who have interesting bits of kit on their desks or mantelpieces to donate them to restoration groups.

Anyone who has served on the iconic and rightly famous Lancaster, or, really, any WWII-era large aircraft, will look at these photos wistfully and recall the drama and the glory of flying on the lumbering bombers; anyone else will look at the cramped quarters and wonder how a crew of 7–11 could ever have fit into this tin can.

Photos are plentiful and captioned in extraordinary detail, but with the aforementioned caveat: it helps to know what you’re looking at/for. Even if you were to visit all 17 survivors, not all of them are open to the public so this book may be as close as you’ll get.