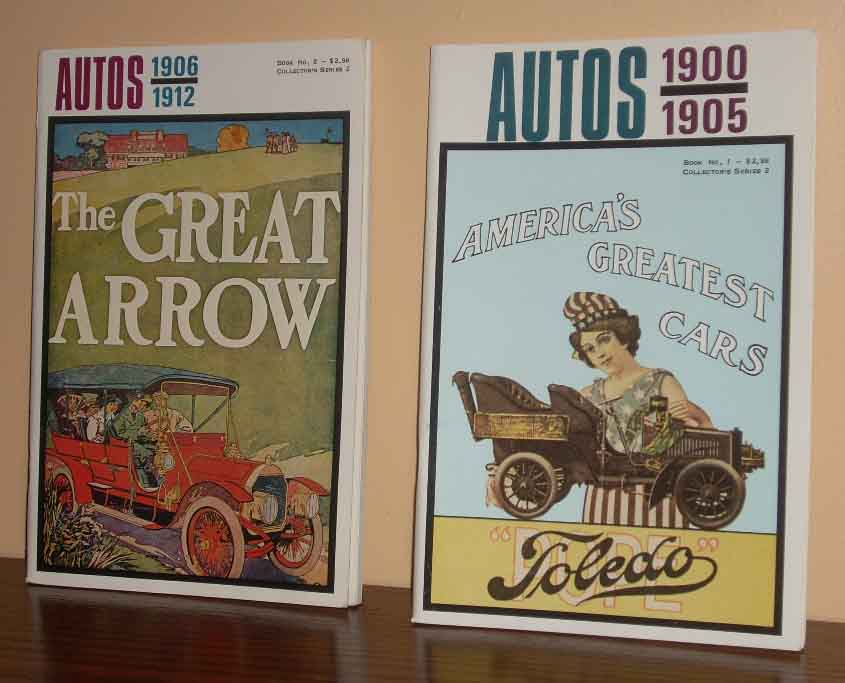 by Ted W and Mitch Mayborn

Historians engaged in research often retreat to the microfiche, or still older files and boxes of period papers and publications that are housed in museums and libraries. Gradually too, some of the contents of these newspapers and magazines are making their way on-line. By examining these period printings, one gains knowledge not only of specific subjects or products and also a sense, an awareness, of the times. A careful researcher reads and looks at everything, the articles as well as the advertisements. And, occasionally someone with collections of original material assembles and publishes books or booklets that are in some way “themed”. Such is the case with these two, Autos 1900–1905 and Autos 1906–1912.

But there is a bit more prompting this review here and now. Both of these little books were assembled and printed in 1972. And, while both have long been out-of-print, a recently discovered box of new-old, never-before-in-circulation stock of both of these two books makes it possible for them to be sold brand new again for as long as there is supply. So, depending upon when you discover and are reading these words, there may still be some new-old stock available. Otherwise you’ll find it necessary to search the secondary market for these two, as well as the other Mayborn-books if you’re trying to assemble entire sets.

The entire set would be an even dozen of these 6” x 9” softbound 48-page books, published in three series. Series I contained one book each on Studebaker, Packard, Lincoln and Buick. Series II were the two books reviewed here plus Autos of Roaring 20s and Autos of the Thirties. Series III was comprised of Thunderbird, Hudson, Mustang and The Last Years of Studebaker.

Autos 1900–1905 opens with a few introductory paragraphs. While there is no similar introduction in the other volume, the observations in the first are true for both: “Many of the new features on recent automobiles were, in fact, standard equipment on some of our very early cars.” Readers exploring the pages of either book will quickly note that, indeed, many features touted as brand new decades later—ranging from turn signals, tilt steering wheels and more—really did have much earlier origins. More significantly, again from the introduction, is “the pages of the past…give …real insight into the heritage…in America.”

The earliest booklet contains an eight-page reproduction of an article titled “Automobile Making in America” from the September 1901 American Monthly Review of Reviews (intriguing name for a publication, isn’t it?). There is no editorial spread in the 1906-1912 volume but it does contain a two-page “Automobile Identification Chart” which is good fun. This chart presents 28 line drawings of cars—all from precisely the same perspective—and the reader is asked to identify the make/model. Yes, answers are provided.

Then there are the ads that are reproduced on the pages of each, all in black and white and all very clear and readable. There are ads from pre-GM Oldsmobile, Buick and Cadillac. Electric-powered cars are represented by such as Columbia, National, Waverley and others. There are ads from companies making what are now considered truly the grand marques like Packard, Pierce (both before and after incorporating the hyphenated Arrow), Auburn, and Mercedes, before it joined forces with Benz. There are ads from a few independent coachbuilders such as Carrosserie Rothschild. There are the radiator-less such as Knox and Franklin, and there are the Popes including -Hartford, -Toledo, -Tribune and others. Also are the more obscure and less recalled today. Can you envision the Lion, or Bergdoll? How about the Day, or Lindsley, or Buffum? Oh, and there are the ads for cars from that “other” man and company—Ford, with the Models B, C and, of course, T. Early tire makers with names recognizable today are there as well with Dunlop and Goodrich among them.

It is nigh onto impossible not to notice that while much has changed in the hundred years that have ensued, some things seemingly do not. One of those unchanging’s is the hyperbole and jargon present in the ads: Well, at least we now know for certain that it’s not merely a contemporary trend, for right there in print starting in 1900 are those claims of “best,” “newest,” “original,” “most improved,” etc.

So here you are, already ten years, a decade, into the twenty-first century, reading about books, published 40-plus years ago that reproduce ads, articles and information from what is now an entire century ago. Think about it! Regardless of how modes of transportation evolve going forward, that which is reproduced on the pages of these books tell of the origins, are from the very beginnings.

Autos 1900-1905, Book 1 of Collector’s Series II
Autos 1906-1912, Book 2 of Collector’s Series II
Ted W and Mitch Mayborn
Highland Enterprises, 1972
48 pages in each, every page is an illustration/reproduction of one or more period advertisements
Original list price $2.98 each
Both books, sold as a pair, are now available in a limited quantity of new-old-never circulated or previously sold stock, from Demontreville Press $10.00
No ISBN of record