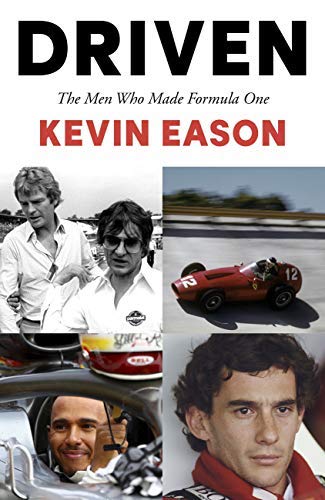 For the better part of two decades, Kevin Eason was a sports correspondent with The Times and then The Sunday Times, during which his primary beat was motorsport, covering the events and various goings-on within the FIA Formula One World Championship until the end of the 2016 season. Such was Eason’s status that he was one of only fifty invited to a private tribute to Bernie Ecclestone in March 2017 commemorating Ecclestone’s departure from Formula One after being shuffled out as a result of the takeover by Liberty Media. Eason was among exalted company indeed at the affair held in a London restaurant often frequented by Ecclestone.

To be crystal clear, I cannot be numbered among the many fans of today’s Formula One World Championship series. While on occasion I will catch a race and even a qualifying session, having following this sort of racing from since I was a schoolboy I have to admit that my interests have wandered elsewhere.

One of the things that usually leaves me unimpressed with much of the contemporary racing journalism is how shallow or facile so much of it is. Most of the time it reads like an infomercial. To be sure, it wasn’t always better in the supposedly hallowed days of yesteryear. Thank goodness that Eason—and several others as well, to be fair—seems quite willing to follow his inner Howard Cosell and “Tell It Like It Is.” The men drawing most of Eason’s attention are Ron Dennis, Frank Williams and Bernie Ecclestone, along with an assortment of others such as Max Mosley, Luca Montezemolo, Enzo Ferrari, Eddie Jordan, Jackie Stewart, Flavio Briatore, and, well, you get the idea …

Not all of these men come off well, of course, but then, few are pure saints. To his credit, Eason manages to convey the complexity and multifaceted aspects of the men “who made Formula One.” Heaven forbid that one should ever feel any pangs of sympathy for the imperious Bernard Charles Eccleston getting shown the door by Liberty Media when it purchased F1, but despite every single, tingling bit of schadenfreude that might course through one’s veins upon Bernie seeming to finally get his deserts, Eason suggests things were not necessarily all that they seemed. [Full disclosure regarding Ecclestone: I was “banned by Bernie” when my press credentials were pulled for the 2002 US Grand Prix at Indianapolis. It was ordered by Pasquale Lattuneddu, Ecclestone’s “fixer,” but Lattuneddu never did anything unless directed by Bernie. Thus, I managed to join a rather exclusive club as a result.]

I am certainly not in the habit of recommending books from the genre into which Eason’s book falls, but in this case I find myself doing so quite easily. It is far better than I anticipated and its portraits of the men—and the few women—involved in the making of modern F1 strike me as being well-drawn and reflecting their personalities quite accurately.