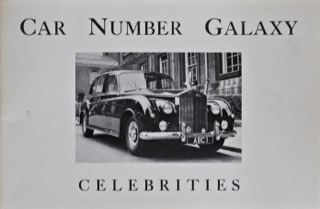 You get the idea. There persists for many hobbyists a fascination for numbers. Part of this is the desirability for the first and the last, the alpha and omega, of—well, only fill in the blank. One- and two-digit production numbers of the LP The Beatles (aka The White Album) change hands for hundreds, sometimes thousands of dollars.

We don’t mean to dwell on the remunerative aspect here, but money, for good or for ill, is a reflection and determiner of the power and allure of alphanumeric combinations for collectors, whether of currency, coins, baseball cards, Barbie dolls or high-end motorcars. And, perhaps more modestly, automobile registration plates, license plates. Or perhaps not so modest. In The Telegraph, June 16, 2008, we find this headline: “Formula 1 star Lewis Hamilton has splashed out more than £200,000 for the personalised number plate LEW 1S.” 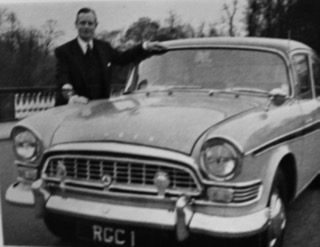 It is apparent that Woodall (1930–2013, the Father of “autonumerology”) exhibited a deep absorption into the various permutations of numbers and letters of British automobile plates. He also had an appreciation for celebrity, prizing those alphanumeric registration combinations that hint at or identify a celebrity driver. The entertainer George Formby (1904–1961) had acquired GF 1 (for his Rolls-Royce) and GF 2 (for his Jaguar). Jack Barclay (1900–1968, a well known Rolls-Royce and Bentley dealer): JB1. Bob Danvers-Walker (1906–1990, a newsreel and radio announcer): RAD10. When Queen Elizabeth was still a princess: HRH 1. 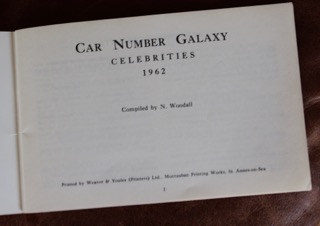 We guess that this booklet was somehow self-published, although Woodall had over time published standard-sized hardback books on the subject. These are still available online. But Car Number Galaxy predates these, and there is something charming, naïve, personal and self-effacing in this small book. The photographs, of Humbers, Mini-Coopers, Daimlers, Bentleys and Rolls-Royces, sometimes taken with their owners, offer an evocative feel for another age, a time, it seems, less hectic and complex. 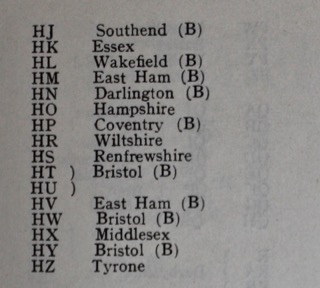 The heart of the book are the detailed lists of registration plates, but there is also an appendix showing Registration Markings (CV denotes Cornwall, for example); acknowledgements; a foreword (by Woodall); a brief history of the plate A1 (again the collector’s interest in the “first”); and contact information to send Woodall “details for inclusion.”

We feel fortunate that we stumbled on this odd bit of vehicular history, and we are glad to take this opportunity to share our finding with you. The book we reviewed here is the first edition, from 1962. Over the years, Woodall published many more, some with his wife Dawn, and for over 18 years with his series editor Brian Heaton. When Noël retired in 2006 Heaton took over and to this day produces these and related books and runs a website where you can buy personalized number plates (the most expensive one currently is 11B—to use on your Bugatti or Bentley, in which case the asking price of a mere £149,995 is chump change.)

Posted Under: Automobiles, Out of Print | Author: Bill Wolf | No comments yet

Porsche 917: The Undercover Story »
« Rolls-Royce and Bentley, Coachbuilt Specials in the Modern Era