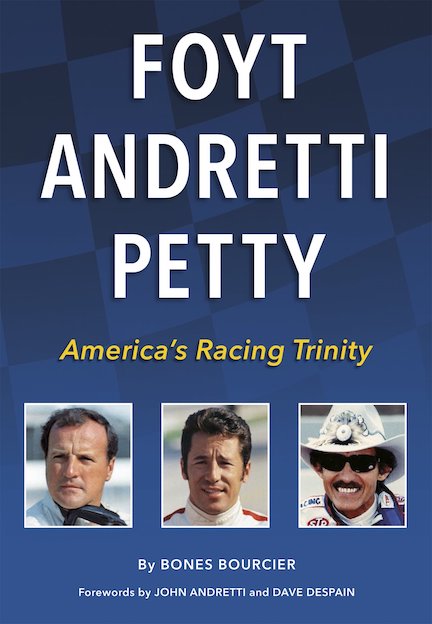 “They crossed paths often, on-track and in the headlines. That started in 1964, when Foyt took his second Indianapolis 500, Petty won the first of his seven Daytona 500s, and Andretti arrived as as an Indy Car rookie. Decades later they even retired in lockstep, Petty in 1992, Foyt in ’93, and Andretti in ’94.”

Readers familiar with racing will immediately wonder if the order of the names on the cover implies a “ranking.” It does not. Resume normal programming.

Readers unfamiliar with racing won’t know enough of the stats to even think of that as a question but they’ll surely recognize the names anyway as emblematic enough to have bubbled to the top layer of general cultural consciousness. As John Andretti, Mario’s nephew, writes in one of the Forewords, “For three men who haven’t competed in more than 20 years, it’s amazing how well their names hold up with the public.” The first part of this remark could have been expanded by the words “as drivers” because Foyt and Petty certainly keep score these days as team owners, and oenophiles will look deeply into their glasses and say: there’s plenty of competition between Andretti and Foyt—when it comes to the wines that bear their names! (Said A.J. Foyt when some junior Foyts proposed a vineyard as a post-retirement passion project, “If we’re going to go up against Andretti make damn sure our wine is better.” This has nothing to do with the book but it speaks to an underlying dynamic that has more to do with deep-core default behaviors than fabricated showmanship.)

If someone was tasked with writing a book about three important American racers, any number of names come to mind. So why did a seasoned, award-winning motorsports writer like Bourcier single out these three? He already wrote a most excellent biography of Parnelli Jones, a name that could easily have been a choice here. Mark Bourcier (b. 1960) has been writing in this genre for 30+ years and reading for longer. He had interviewed our three protagonists in the past, repeatedly, and while he is quick so say “I don’t claim to know any of these men very well” his fully fleshed-out frame of reference allows him to delineate that a key aspect of their careers is that they overlapped at full boil at just the time that American media, especially TV, zeroed in on motorsports as a populist favorite, read moneymaker. That all three had oversize personalities only helped. Noted broadcaster Dave Despain, in the second Foreword, likewise emphasizes that this book’s purpose is not settling the futile question of “ultimate racing greatness” but to describe the effect “the astonishing congruence of their careers . . . had on motorized competition in America.”

That the whole architecture of the book is in service to that premise is evident by a mere look at the Table of Contents: the book is divided into three parts—Princes, Kings, Gods. If you’re new to Bourcier’s writing consider it an oversight that needs remedying. Clever wordsmithing in and of itself is just noise but here you have a writer who is so fully immersed in his field the he can go deep and wide to string bits together in a fluid, engaging, persuasive manner.

Told in chronological order the story takes us from the mid-1960s to about the the 2010s. While the tone is conversational, pretty much every sentence contains a fact or three. There will be numerous instances where a reader’s memory or interpretation may deviate—and here you’ll have to trust that Bourcier is on top of his research. He lists the “big” resources he’s consulted—books and the like—but not the thousands of newspaper reports and magazine features he’s read. As a journalist he obviously conducted countless interviews himself, in period and also specifically for the book, and he can further draw on his notes that would go beyond whatever was published/broadcast. The book contains many quotes and excerpts from such material.

The photos appear in three discrete sections in the book, one each per driver. It would be easy to imagine a reader carping about the paucity of photos, and that they are all b/w only. Well, it is what it is, namely a $30 book—but hardbound and with a 12-page Index, meaning the publisher put resources where they add value!

The Racers  »
« A History of Auto Racing in New England