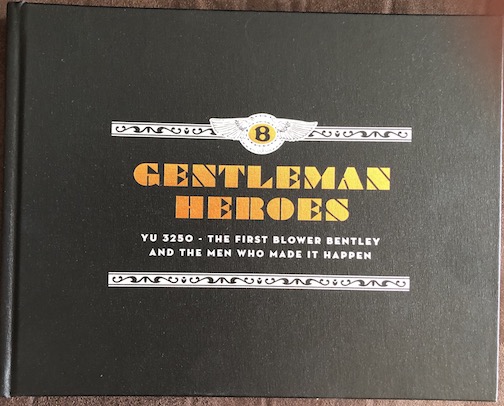 “The Great War was the foundation of the whole Bentley escapade, the building block for almost every character in the car’s early years. Each had a CV right out of a Boy’s Own adventure.”

You probably had your fingers on this famous 1928 4½ Litre Bentley without realizing it—it was modeled by Lesney in its Matchbox “Models of Yesteryear” series, marked No. 5. Realistically, this is as close as most of us will get to that important car.

While this book is—and certainly started out that way—the story of one particular Bentley chassis, it grew into rather more than that. As the very first of the four immortal Birkin Blower Bentleys, #HF3187 aka HB3404/R after Tim Birkin drastically modified it in 1929/30 (reg. YU3250) is automotive royalty, but precisely because it is the first, this is the perfect occasion to also look at the Big Picture story of how a model that didn’t suit WO Bentley’s philosophy at all came to be in the first place.

As publisher James Mitchell rightly says in his Foreword, “They key players, profiled throughout the book, are as important as the engineering excellence of Bentley Motors.” A second Foreword is by the car’s current owner, car connoisseur extraordinaire Chip Connor. (Readers who’ve missed a few memos from the Bentley world may associate YU3250 with a different name: the late George Daniels, a fixture in the Bentley Drivers Club who also owned another Birkin team car, the iconic red single-seater Blower UU5871, but he passed the YU3250 baton to Connor already way back in 1995).

Books could be written about either man’s collection and collecting philosophy. Custody of a historically important car is a complex matter and while all the car’s notable owners are said to have “understood the significance of YU within the WO and Blower Bentley story,” history will record with gratitude that it is William E. (Chip) Connor II, American-born Hong Kong-based businessman with deep pockets and unimpeachable motoring cred (he was recently elected to the FIA Senate, the only American in the 16-member group), who raised the bar by bankrolling the publication of this fine book.

Not least, Connor’s interest in properly documenting this car has brought the towering Bentley expert of our age, Clare Hay, back to the table, a rare thing in these days of her self-imposed withdrawal from commercial publishing.

There are, in fact, several big names attached to this book: in addition to award-winning author Chapman there’s Michael Furman on the studio photo end (only a handful shots though; and if you are a print geek you’ll note that his photos in his books look better, which is why Furman launched his own company in the first place) and on the design side Julian Balme at Vegas Design Associates. Tim Houlding contributed a survey of mass-produced YU3250 model cars. With this deep a bench, and only 1000 copies extant, the book will became a rarity before much of the world has even had an opportunity to take note of its existence.

If this is your first foray into the world of the Vintage Bentley, this book is a solid and well-rounded but sweeping introduction. Beginning with WO Bentley’s early fixation on steam locomotives which he made his first career choice the story quickly moves on to his interest in motorcycle riding and then racing, and then the inevitable next step, motorcars. If you are an old Bentley hand, none of this will be news to you but at least some of the subsequent details may well be, from Birkin’s connection to Amherst Villiers who developed the supercharger, to Birkin’s racing sponsor “Miss Mystery” Dorothy Padget, to the car’s competition milestones both in period and in later historic racing, or the major restoration in the 1950s and highlights of its ownership history. The latter two items are probably the least fully plumbed but it is surely not for lack of research but the need/desire to exercise some measure of discretion.

Chapman’s prose is refreshingly breezy (“Birkin may have had blue-ish blood and a playboy image but he also had a reasonable amount of engineering experience.”). The reproduction of period photos, thoroughly captioned, is superb and the book’s landscape format is obviously ideally suited to car photography. Many period sources are quoted and race reports and advertising material etc. reproduced. The technical details of the blower are of course enumerated. That said, the book does not dwell on WO’s dismissive attitude towards supercharging (ever the loco man, he favored bigger engines instead), an attitude well vindicated by the Blowers’ unimpressive reliability and race history.

Long story short: if you’re fleet-footed enough to snap up a copy you’ll be glad you did!