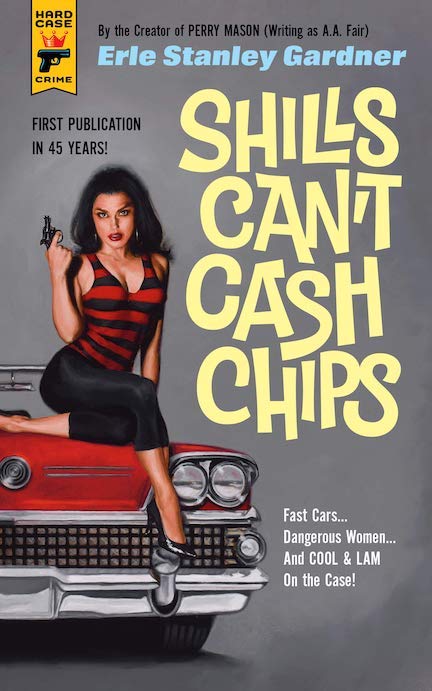 Fast Cars… Dangerous Women… and COOL & LAM On the Case!

A big, fat Buick, a bevy of sultry dames, a tale more twisted than Dick’s hatband and a little chin music. Starting in 2004, the house of Titan Books, London, began publishing their Hard Case Crime series, classics from the 1940s and 1950s, along with new novels with that gumshoe modus operandi. As this review is being written, over one hundred books are available, with Shills Can’t Cash Chips, a Cool and Lam mystery, among them.

From 1939 to 1970, twenty-nine Cool and Lam books were published by Erle Stanley Gardner, writing as A.A. Fair, and have been, for decades, overshadowed by his Perry Mason star turns. Mason undoubtedly can be listed among the great and lasting figures in detection, what with the definitive portrayal by Raymond Burr and, now, a new origin series, on Amazon, set in 1932 Los Angeles—not to mention the 80 Mason books still in circulation. Perhaps, just perhaps, with Hard Case popularity growing and spreading, Mason may have some competition from the heavyset, cigarette-smoking, foul-mouthed, no-nonsense acquisitive Bertha Cool and her pint-sized, near-fearless, sorta-hard-boiled, one-smart-cookie operative Donald Lam. Grittier than the Mason novels—although not nearly as tough or as raw as Raymond Chandler or Dashiell Hammett.

Was there really a rear-ender at Seventh and Main? Why was Holgate murdered and stuffed in the trunk of Lam’s jalopy? How did Elsie Brand, Lam’s secretary, save the day? There is little question as to why various women answer the apartment door in a state of dishabille. The plot twists and turns like a worm on a hook and has more red herrings than a North Atlantic fish fry. We have Lam’s methods that sometimes stray from common legal niceties, and we have the like-hate relationship between Lam and the rough-talking Detective Sellers. And, unlike many shamus antiheroes, the undersized Lam is more of a punching bag than an adept street pugilist.

Like all the Cool and Lam adventures, Shills is a quick read; and, although the detection relies more on surprising complexities and a reliance on deus ex machina than on Holmesian deductive reasoning, it satisfies and entertains. We love the Laurel Blechman cover paintings. Four and one-half stars.