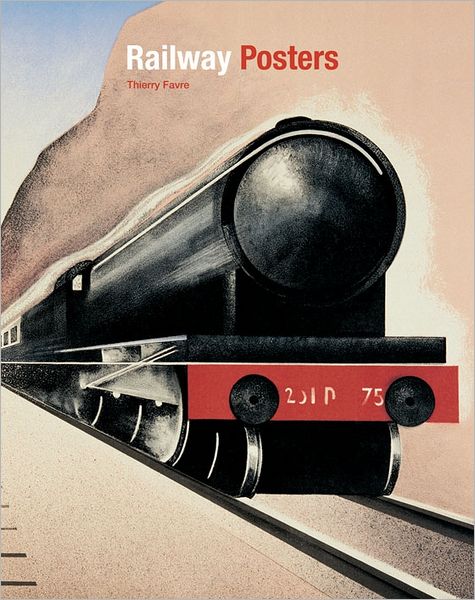 This opulent large-format book is the English version of a book that first appeared in 2010 in its original French. It presents a micro-history of the development of passenger rail travel, mostly in the Western hemisphere, in the form of travel posters. While the visual material ranges from 1861 to 1982 the text goes a bit farther, ending with brief comments about the modern-day high-speed bullet trains in Europe and the Far East.

The comments are, in fact, rather brief throughout—only about 16 pages of 184—and can only give the most high-level summary of the topic. The focus is firmly on European developments, with occasional remarks about North America. Commendably there are references, if only in passing, to other parts of the world (Africa, Asia, Australia, South America, Near and Far East.) As there is no Index these are impossible to find except by stumbling upon them.

Having spent a dozen years and more of his retirement traveling—much of it by train—Favre (b. 1931) has an affinity for the subject. In the Introduction he makes the interesting observation that train travel posters go about presenting their subject matter in a different manner than airplane and ship travel posters: less emphasis on either the technical (planes) or creature-comfort (boats) features but more on the process of journeying and on landscapes/locations. Be that as it may, the posters certainly are of their time not just in terms of graphics, colors, typefaces etc. but also in how they depict society and the world in general. As mentioned before, the text is brief but even in its brevity gives an accurate impression of long-distance leisure travel being, at least for a few decades, in the main a pastime for the moneyed few. Modern-day readers will also be vastly amused to read of the alleged pseudo-scientific hazards to life and limb (collapsing lungs, swelling brains, being sucked out of open windows) of traveling at “extreme speeds”—all of 20 mph, downhill and with a tail wind.

In what order the posters are presented is not disclosed. There probably is no single one, and certainly no “right” way to do it. The book is in chronological order, divided into principal eras but the posters are not strictly in year order but seem to follow a geographic pattern. There is no benefit in overthinking this except to advise the reader to whom sequential order is crucial to pay attention to the captions. The captions list, to the extent that it is known, title or description, artist, year, size, and source. Only four posters are non-European/American: two from Japan (one of which printed in German!) and one each from China and Egypt. One can only hope that Favre will turn his attention to these in a future book as their graphics and philosophy—presuming they are aimed at their respective home markets as opposed the foreign tourist—are distinctly different.

Many of the 200+ illustrations are full-page, showing detail to good advantage. Of the six that cross the gutter three are robbed of some detail due to the straight spine not allowing the book to open fully flat. Print reproduction is impeccable. At the back of the book 28 mini bios of poster artists are presented in just a few sentences each; this list does not include every artist shown in the book.

Whether your interests lie in trains specifically or “mobility” in general, or travel or art, this well made book has much to commend it and is a joy to behold and handle. A companion volume by Gabriele Cadringher does the same for ocean liners (ISBN 9781851496730).