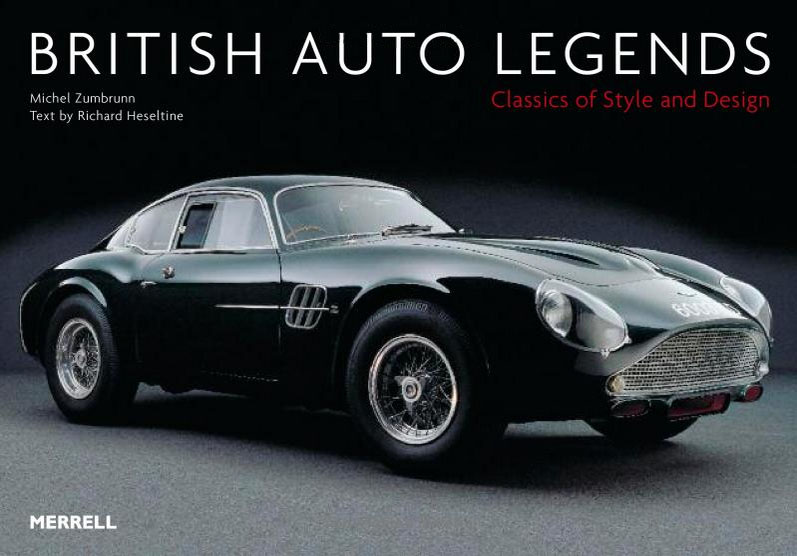 The word “legends” in the title is almost redundant; that country has managed to imbue the world with marques like AC, Aston Martin, Bentley, Jaguar, Lotus, MG, Rolls-Royce, Triumph—cars that enthusiasts covet for their characteristics: from sporting flair to superlative luxury, each carrying something viscerally attractive, something quintessentially British. This is one of a series of books produced by photographer Michael Zumbrunn and writer Richard Heseltine—other titles include Auto Legends, Ferrari Legends, and American Auto Legends. Like the other books, the landscape format of this hardcover edition (9.5 x 12.25”) is ideal for capturing and showing off the cars to full effect.

Zumbrunn has had a long career photographing cars. He began wanting to study architecture but pursued his hobby instead, undergoing an apprenticeship with a fashion photographer and in 1961 set up his first studio in Zurich. He ascended in car photography with a series of successes in the 1980s and his photos have appeared in prominent publications, including Automobile Quarterly and Octane magazine.

Similarly, Heseltine had another interest to start: racing driver. Never breaking into that field, he pursued journalism, starting with Classic & Sports Car magazine in 1997 and later with Motor Sport magazine in 2003 before becoming a freelancer in 2006, contributing to dozens of publications worldwide.

This book shares the same methodology as the others in the series. It begins with a 20-page introduction, ambitiously covering the entire history of the British automotive history, which it does quite well—considering all the directions that one could digress, given, as Heseltine notes:

“The history of the British motor industry is a tale of faltering early steps, appreciation of the automobile, rapid growth, global domination and a slow, often painful decline amid social turmoil and catastrophic complacency. Sprinkled liberally among all this are stories of tremendous human endeavor, of boundary-pushing innovation, throat-catching artistry and universal supremacy in motor sport. For a country of such small size, geographically speaking, Great Britain’s role in shaping the history of the automobile cannot be overestimated.”

Following the Introduction we have the central focus of the book, the photographs—from 2–8 pages devoted to each car, including one page of text elaborating on the cars and their manufacturer. The cars are not listed in the Table of Contents but are only listed in the Index. There’s a Glossary of motoring terms (with only 33 dole entries, and no British terms in particular), a directory of museums and collections around the world (with 21 entries, appropriately, mostly in the United Kingdom and surprisingly, only two in the United States), and four pages with ten biographies of “The Names Behind the Legends.” 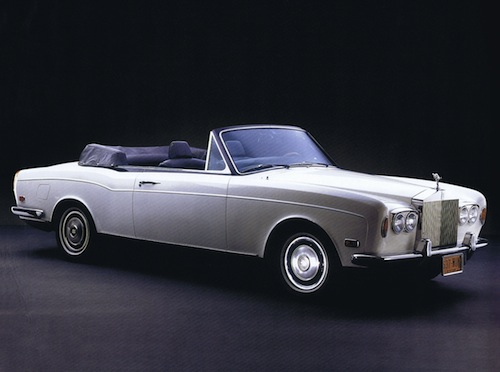 This is a splendid book, made to a high quality, and it is an attractive tome to spend time with. While the photographs are attractive, there are elements that distract the eye. For example, many of the photos taken at a three-quarter angle have lighting (at times what appears to be flash lighting) getting caught in the wheel nearest to the camera, sometimes causing an overexposure. Outside the studio, lighting is often an element one tries to control by reacting to it, but inside the studio, it is an element, along with all others, that are in the control of the photographer, so everything one sees is interpreted as being what the photographer intends the viewer to see. Accordingly, while there can be an element of “style” in the photography—from the most “untouched” to the most stylized—one would have to accept that this lighting distortion was an effect Zumbrunn was in want of achieving. This was greatly pronounced in the Rolls-Royce Corniche (above) photo on page 236. On this same car, the text recognizes that the Corniche was in production, in evolving iterations, from the 1960s to the 1990s—a circumstance that would seem to warrant more exposure than just one picture. 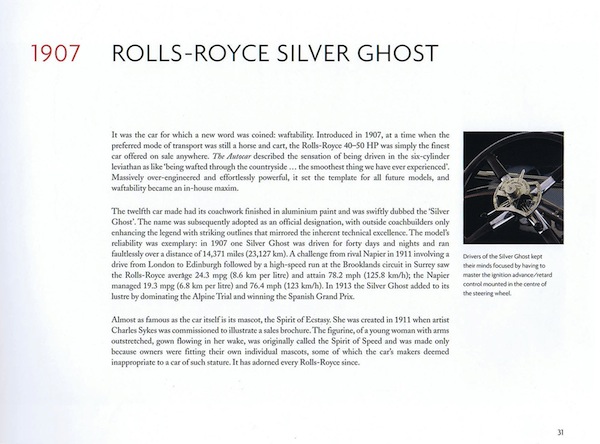 On the other Rolls-Royce, the 1911 40/50 Silver Ghost—on page 31 there’s a caption under a photo of the steering wheel that says “Drivers of the Silver Ghost kept their minds focused by having to master the ignition advance/retard control mounted in the centre of the steering wheel” but the photo clearly shows that the controls are not labeled such but “Early/Late” (same function, though) as Royce made a point of shunning any French nomenclature for his cars. Also, the Silver Ghost was not introduced in 1907 but at the November 1906 Olympia Show in London.

Given the size of the book and its print quality, the hardcover version is highly desirable.