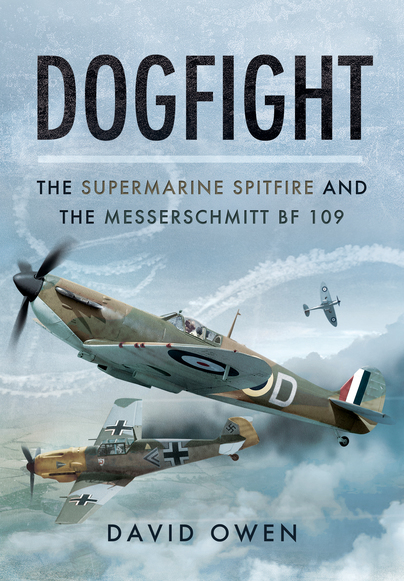 “Neither Messerschmitt nor Mitchell designed their fighters in a vacuum. Both had to meet an official specification from their respective Air Ministries. In a perfect world, these would be explicit enough to make design simple and straightforward, bearing in mind the most extraordinary fact that neither man had any experience of designing even an obsolete biplane fighter, let alone a modern monoplane. Any official guidance on what was wanted would have made their tasks easier.

The story of two of the most famous WW II fighter aircraft has been told many times and in many ways. That they should be measured against each other seems obvious enough and that is what this book, published on the occasion of the 75th anniversary of the Battle of Britain, aims to do. The claim that this has rarely been done before (“fewer than the fingers of one hand”) seems a bit far-fetched and even this book devotes only about half its pages to telling two separate development stories before shifting to the actual comparison.

Famed test pilot Eric “Winkle” Brown who died (2/16 at age 96) shortly after this book was published is quoted in the author’s Foreword and, having actually flown both types, says with authority and with nuance: “Let me say from the outset that I would not like to be the pilot of a Bf109F in the western operational area.” The second half of that sentence is crucial and already hints at the difficulties of making blanket statements.

Author Owen has an engineering and aerospace background and written several dozen books on a quite disparate number of topics so it is hard to say if he here merely synthesizes published reports or is able to draw on original, first-hand sources. While there is plenty of detail there is also a certain “distance” to the subject, lacking the pointedness of, say, a Winkle Brown (whose comments about the aircraft are, incidentally, of a generic nature and not specifically about this book).

Be that as it may, the book examines the backgrounds of the two designers, the technical know-how, the political landscape, the logistics of manufacturing these aircraft, and pilot training and rules of engagement.

As to the “Dogfight” part of the title, the key take-away is that the aircraft were evenly matched although subject to performance differences due to atmospheric and operational parameters, and that the deciding factor was more often than not the skill of the pilot.

The Bibliography is thorough and includes the one title that one heretofore would have thought exhausted the subject, David Isby’s The Decisive Duel: Spitfire vs 109 (2012), and it would still be fair to say that it goes into more, or more vivid, detail on the piloting side. The Index is quite uncommonly well layered. Photographically, there is enough to hold the story together (also a few sideview drawings) but, typical for this publisher, on the small side and b/w only.

The book is much more of a big-picture treatment than the title lets on and it can stand quite well on its own.