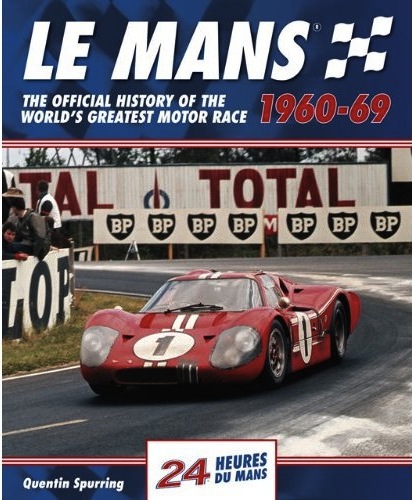 Note the word “official”—this book is indeed published in association with l’Automobile Club de l’Ouest (ACO), the organizer of this event. Thus Quenton Spurring had access to the ACO’s own archive of photographs and race data although it is not the first or the only book to have had that benefit. This is all most auspicious because this book is only the first installment in a planned series of eight that decade by decade will cover every race since its beginning in 1923. The order in which the books are to be published has not yet been announced but the next one will cover 1970–79.

“The Le Mans 24 Hours was (and still is) so much more than a motor race. To this day, it remains a proving ground for new automotive technologies and, above all, an incomparably arduous and complex challenge to man and machine.”

Spurring has excellent credentials to mastermind such an elaborate undertaking, having attended the 24 Hours 23 times since 1978. He has also written several racing-themed books, was press officer of Graham Hill’s F1 team, is Autoweek’s European motorsports correspondent, founder of Q.ED (a motorsports specialist publisher), and has been the editor of British magazines Competition Car, Autosport, Racecar Engineering, and The Paddock.

It is surely not a random choice to begin the eight-part series with this particular decade. These were especially rambunctious years and not just because of the relative lack of safety measures compared to today (six drivers and three spectators died here that decade). The postwar deprivations had become for most people a thing of the past, as had the memory of the tragic accident in 1955 that killed over 80 people and might well have done racing in. Increased participation by big-name manufacturers translated into novel if not always sophisticated technical innovations. The cars got significantly faster and more powerful. The race had become important once more. Moreover, this is probably also the decade to which most current-day readers can easiest relate to even if they are not motorsports aficionados. The names of the cars are as recognizable as those of the drivers, many of whom still amateurs then (sportsmen, not amateur drivers!), and the technology had not yet become so unapproachably single-purpose specialized that the car you saw on track one day couldn’t run you over on the market square the next. What better than to start here and get readers interested in the upcoming books. We should also recall that it was certainly the decade to which Americans paid rapt attention thanks to Ford’s epic crusade to break Ferrari’s winning streak, as it is these two marques that claimed all victories that entire decade.

The book devotes roughly 30 pages to each year. In each case the first page presents race stats (length, participating marques, winners of divisions and indeces, and complete entrants list including reserve drivers (start no., car, driver, displacement, engine, weight, and class). Brief summaries of entry modalities, qualifying/practice, and the race itself are followed by in-depth descriptions of key aspects of the race in regard to cars, teams, drivers, or manufacturers. To emphasize: this is not intended as a blow-by-blow race commentary but, for lack of a better way of saying it, a contextual analysis of each year. A sidebar enumerates rule changes since the previous year’s race. Each chapter ends with a full-page color reproduction of the official race poster and tables listing hourly race positions, complete results, class/category/index winners, and championship standings. Short of listing what brand of wristwatch the drivers were wearing there really is not anything else the book could usefully list.

The Introduction is noteworthy for its explanation of the concept of “target distances” and the Indices of Performance and Thermal Efficiency. This, especially the latter item, is complicated business and really key to understanding the “endurance” aspect without which a 24-hour race would be pointless. Also shown is an annotated map of the circuit.

Photos. Yes. Many. And very, very nice ones. The majority are from the LAT and AOC archives and the Grand Prix Library. None of the photos are captioned but, except for the two-page chapter openers, all photos go with the text with which they share the page. In many cases the text will specifically refer to particular photos. To some extent this obviates the need for photo captions but it does mean that some of the photo detail remains unexplored. Example: one page may talk about the Ferrari “Breadvan.” The photos on that page are obviously of that car but one of the photos shows the car in the pits with a bunch of people. Who are the people? Certainly readers new to the subject will consider this a missed opportunity. And for the text to tell you that a photo shows say, drivers “Gendebien and Hill” is pointless if it doesn’t also tell you who’s who! Not ideal, methinks, for a book that is supposed to whet readers’ appetite for the whole set.

Appended are extensive statistics for the decade, replete with pie charts showing reasons for DNFs, tables of marque and driver records, and pages of bar graphs of various stats. In addition to Le Mans books the Bibliography lists mainly marque-specific literature; the Index is sufficiently thorough.

All eight books will one day make an impressive and impressive-looking reference tool.