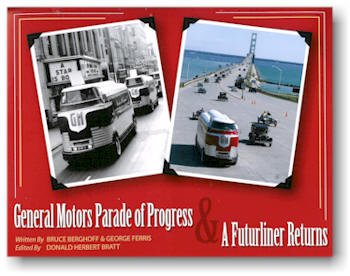 Future Retro “STEM” and a “Stem to Stern” Reprise.

There was a time, long ago, when the fields of automotive advertising and marketing were at their infancy, mass media didn’t exist, and corporate outreach hadn’t been invented. In 1938 Charles F. Kettering (VP General Motors Research Labs) wanted to bring industry to the public. He had the idea of launching a series of mobile exhibits to demonstrate the latest technologies and science in such a way that it was educational and entertaining. The concept was to fascinate the youth of America to such a degree it would “…set a boy to dreaming.”

In doing so Kettering’s “Parade of Progress” essentially created what we know today as corporate outreach and illustrated the rudimentary beginnings of STEM programs (Science, Technology, Engineering and Math). His projects were the precursors of modern-day public relations, marketing, as well as public information and education (PI&E).

Inspired by the 1933 “Century of Progress” Chicago World’s Fair, the Kettering programs were called “Parade of Progress” and traveled across the country using caravans of vehicles called “Streamliners” then re-designed and named “Futurliners.” These vehicles were essentially heavy-duty motor coaches styled and designed by Harley J. Earl’s Styling Studios and had a long, horizontal double doors which opened to a stage or platform for lecturers, demonstrations, performances, and exhibits/displays.

The “Parade of Progress” programs were conducted 1938–40, 1941, and 1953–56 and Harley Earl’s “Motoramas” flowed from this success. Overall, admission was free, open to the public, and non-commercial. GM products were woven among the exhibits, but no direct car sale contacts were made. These successful direct approaches to making person-to-person contact reached thousands of families and inspired as many youths.

This generously illustrated book includes the story of the recovery and restoration of Futurliner No. 10— one of the original twelve. This vehicle specifically displayed the winning models from the 1953 Fisher Body Craftsman’s Guild. Don Mayton of Beaverdam, MI, a collector of antique Buicks, pulled together a Futurliner Restoration Team consisting of 100 volunteers and spent 6 years recreating a show-circuit success story.

This is a one-of-a-kind book which sheds light on a very obscure but important slice of automotive history using archival images and a “living history” to tell the story. This fascinating book is perfect for two types of readers: (1) automotive history buffs specifically GM connoisseurs who will enjoy the 190 period-vintage photos from GM Media Archives, and (2) gearheads/car buffs who will enjoy 90 recent color images of the restoration process.