Lost Hot Rods: Remarkable Stories of How They Were Found 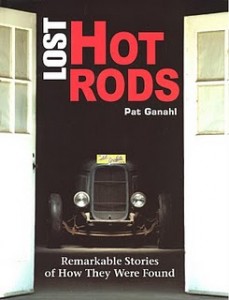 Add to the quote below the fact that every time a hot rod got sold the subsequent owner would further personalize the vehicle and that no one back then ever thought rods would become collectable or be considered “important” and you see the predicament “hot rod archeologists” like Pat Ganahl (he coined the word, back in the antediluvian mist of 1995) face when looking for “historic” or “original” rods.

“Rodding, back then, was a trend-driven exercise in a trendy time. After you built a rod or custom in the prevailing style, if you kept it for any length of time, you’d have to keep updating it to remain cool at the local drive-in or annual car show.”

Ganahl himself considers this book “decades in the making” and the readers of his columns in various magazines (Hot Rod, Rod & Custom, Street Rodder, The Rodder’s Journal) will recall the many snippets over the years of “vintage tin” that had gone to ground, dropped out of sight, been forgotten. Now, at last, the stories of some of those very cars—hot rods, early customs, and drag racers, often well known in their day—have come together here in a proper book full of detail and background. They are joined by other cars he considers worth knowing about not because they were famous, pedigreed magazine cover cars but because they have been removed from the public eye for decades, being squirreled away in private collections or in the backs of shops after long ago abandoned restoration attempts.

Ganahl came of age in the California of the 1950s and never forgot his first hod rod sighting, long before he could even drive. Already then, merely as a pastime, he made it a point to know who drove what and to track the comings and goings of interesting cars. This predilection, coupled with the contacts he made over the ensuing decades as a hot rod insider came in handy when it came to time to gather material for this book (his tenth). Networking is in fact the key piece of advice he has for people who want to find vintage hot rods today. That, and having a hot rod and using it—“It’s like trolling with bait!”

The book is full of such practical tips because it, unlike the vast majority of “Lost/Found”-types of books, focuses on the actual searching and finding. Ganahl does believe that, while the truly historic cars are by and large accounted for, there are still lots of worthy cars to be found—but, surprise here, less in barns than in city garages! In his easygoing, conversational writing style, the examples he describes here cover the whole spectrum, from boxes of unlabeled but hopefully related parts to still-complete specimens that only needed sympathetic recommissioning. Period photos of the cars accompany photos of the cars in their current state. Having to rely on other people’s photos, Ganahl (who is quite the photographer himself) is refreshingly unperturbed by their uneven quality, which he himself describes as “from very good to edgy at best.” Sounds worse than it is—most are just fine. Besides, even a crummy 30-year-old snapshot is better than nothing in a book whose whole point is to illustrate the then/now lifecycle.

The Table of Contents is extraordinarily detailed (and makes an Index unnecessary), the 100+ cars being grouped into “themes.” An early chapter looks at the methods, such as they are, of six car hunters. A closing chapter details noteworthy cars that—for now—remain lost and whose trail has gone cold. If you know your hot rods and customs you will surely recognize quite a few of the names here; if you are new to all of this you will find much to discover, and to appreciate.

The Allure of the Automobile: Driving in Style, 1930–1965 »
« Advanced Engine Development at Pratt and Whitney