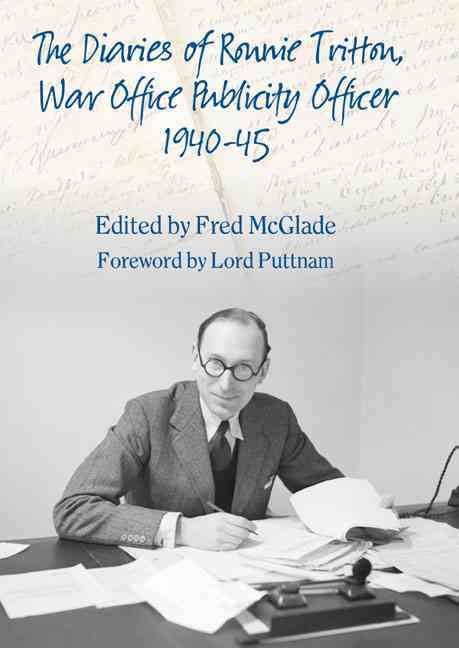 “Throughout the Second World War Tritton managed to achieve the almost impossible task of transforming the ethos of the British military and political establishment, from the lackluster attitudes towards filmic and photographic recording of the early part of the war, into an almost total acceptance of the use of the camera as a weapon.”

Is a “publicity officer” the same as a “press officer”? If you think about it, the answer should be no. Today’s military has press or public information officers whereas a celebrity has a PR agent. The amount of  “spin” allowed the one is denied the other. It does not become apparent in his diary where Ronald Edward Tritton saw himself on that scale. Certainly his first assignment, the reason, in fact, he was hired in the first place, was all about spin: sell the military establishment on selling its mission to the general public.

The military’s desire to keep its cards close to the chest is fundamentally in conflict with the public’s desire to be informed. Commanders worry about compromising operational advantages by broadcasting their movements and intentions, the public worries about its elected or appointed representatives covering up failures or atrocities. My Lai, bin Laden, the recent attack on the US embassy in Benghazi—examples abound. “Managing expectations” was a totally different game in Tritton’s day, and today’s professionals will read his account with some incredulity. That is, when Tritton addresses the topic at all. His diary is as much about the weather and his wife as it is about carpet bombing and being tasked with making “a film about dance musicians in the army . . . what would the Russians battling for their lives and their country think of us?” (Aug. 1942).

Tritton (1907–1990) was not a PR professional in terms of formal training. After a number of jobs in various fields he had more or less fallen into PR work and done well. Having worked in Public Relations for the Savoy Hotel Group he had only been back in the UK from a four-year US assignment a short while before being “discovered” at the Savoy London in 1939 by a patron who happened to be Director of Public Relations at the War Office. The very fact that he was not a military man, not beholden to the military establishment, was seen as a key asset for successfully working with the dysfunctional departments of the War Office and the Ministry of Information during WWII.

Begun shortly after being appointed War Office Publicity Officer the diary encompasses five years of almost daily entries. They obviously touch upon many things that crossed his mind and his desk. One assumes Tritton wrote it simply as a private record, how else to explain the level, or rather lack of, magnification and the indiscriminate treatment of both the trivial and the important. The reader looking for a record of the time, a slice of life will find much here to add color to the picture; the reader with more specific political, historical, and military interests will have to look quite a bit harder for gems and even then will have to provide much of the big-picture context from other sources. Smaller details (especially explanations as to names/significance of people and places) are thankfully provided by McGlade in the form of footnotes right on the pages where they are needed.

Published as part of the Helion Studies in Military History the book clearly has a place, and the record is the richer for having it. But much like an understanding of the history of cooking would not be materially advanced by reading Julia Child’s diaries, Tritton’s writings themselves do not really bear witness to either the singular challenges of his assignment, his place in the larger scheme of things, or his internal reasons or values that made him just the right man for the job. British flm producer David Putnam in the Foreword rightly credits Tritton with possessing the “vision and vim” to “understand, as few others, the power of the moving image to convey the impact of conflict and to shape the way in which people perceive war” along with the “grit and determination” to institutionalize an appropriate mindset within a resistant establishment and lastingly reform a branch of the military. But why and even how Tritton did that remains undiscussed and therefore unappreciable. This, of course, is neither McGlade’s not Tritton’s shortcoming—it is the difference between a diary and biography!

McGlade (b. 1953), who had a similar circuitous professional life as his protagonist, donned the historian’s hat only later in life, after a stint in the army and a civilian career in the insurance business. As of 2008 he can add the initials “PhD” to his business card and, relevant to this book, authored The History of the British Army Film and Photographic Unit in the Second World War (same publisher, ISBN-13: 978-1906033941) and contributed to the BBC3 documentary Shooting The War that he also narrated. The former was published only in 2010 and it is surely misguided diffidence not have referenced it in the exceedingly short Bibliography.

Lightning Eject: The Dubious Safety Record of Britain’s Only Supersonic Fighter »
« The U-2 Spyplane: Toward the Unknown, A New History of the Early Years