Las Vegas, Organized Crime and the Pinnacle of Motorsport 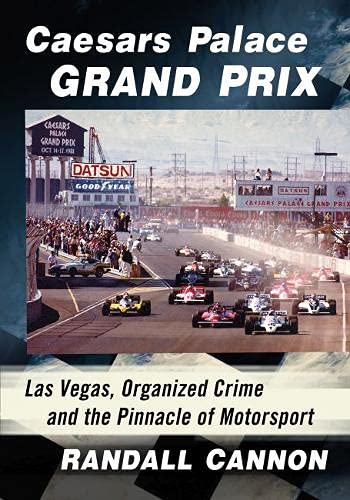 After the initial look-through utilizing the time-tested Scholarly Scan Technique one learns in graduate school in order to cope with massive reading assignments I reviewed my notes—and went back in for a closer look. This book is the second time Cannon explores a tale involving Las Vegas, organized crime, and motorsport. He first opened that door in 2018, with Stardust International Raceway: Motorsports Meets the Mob in Las Vegas, 1965–1971. That book had seemingly come out of the blue, taking on a topic that hadn’t so much been overlooked as simply been so obscure that few would have even known it existed. Kudos for Cannon for thinking outside the box.

As an aside, it was the sort of book that could just as easily fit into the True Crime section as the Motorsport section. The same is true for the new book.

-Yes, the one held in a casino parking lot.

-The one that was part of the 1981 world championship.

-The one that was also part of the 1982 world championship.

-Yes, that very one.

Having read the book a second time I was still left with something I could not quite put my finger on that bothered me. Perhaps it was the thought that the racing part of the story (how the GP here started in the first place and how it ended up hosting the final round of the 1981 world championship, no less) was complicated, too complicated on its own, even without the Mob angle that makes up such an integral part of Cannon’s book.

Or, conversely, that the True Crime element of the Caesars Palace saga could stand alone as its own great story, relegating the motorsport part to a peripheral element. Or, perhaps, it was the sense of whiplash I experienced by the story bouncing back and forth between the two. Or, and very much a no-no for a book reviewer, I couldn’t help thinking of the book this one could have/should have been and not the one it is. At any rate, there was definitely something that I was either not getting or that I was overthinking; often it is an accumulation of minor niggles that results in such fog. Besides, the elements that Cannon strings together are plenty complicated—but what if the reality behind it all is even more mind bogglingly messy? A good editor might have helped!

Cannon is nothing if not ambitious with Caesars Palace Grand Prix, tossing out dots all over the place and then attempting to connect them, sometimes stretching or belaboring them needlessly. Example: a conclave of Organized Crime figures meets in Apalachin, New York, in November 1957 (by the way, it is pronounced “apple-chin”). It is 50 miles from Watkins Glen. Cannon finds multiple ways of repeating that point: they are 50 miles apart. All right already.

When the dots do connect, they often cause the “AHA!” light to come on. They also reveal some of the sausage-making aspects in the background to motorsport that too often are ignored or simply wished way. It is unfortunate that too few people are interested in understanding the infrastructure of motorsport past or present. Not to mention that there still seems to be a problem with confusing nostalgia and history. But, I digress . . .

The True Crime stuff is rather fascinating and interesting all on its own. It’s not every day that one finds FBI files in the Bibliography of a motorsport book. Nor is it common to be treated to actual footnotes!

I have skirted around making any comments regarding the quality of the motorsport aspects of the book. To his credit, Cannon was wise enough to consult the International Motor Racing Research Center (IMRRC) in Watkins Glen (disclosure: I am on the IMRRC Historians’ Council). The Acknowledgements certainly indicate that he expended a significant effort to research this book. That said, among the things that probably bothered me most are such easy to avoid missteps, as well as certain omissions. Such as . . .

In April 1980, at the direction of the Fédération Internationale du Sport Automobile (FISA), which replaced the CSI in 1978, the FIA officially terminated the existing Championnat du Monde des Conducteurs effective the end of that season. Beginning with the 1981 season, it would be replaced by the FIA Formula 1 World Championship. Unlike the previous championship the new one was owned—specially the commercial interests—by the FIA, and the formerly separate technical and sporting regulations were now combined into a single set of rules. This was a direct reaction by the FIA to the issues that the FISA and the Formula One Constructors’ Association (FOCA) were clashing over during the FIASCO (FISA-FOCA) War.

As an aside, the FOCA was formed in early 1964 as a means for its members to negotiate starting monies and travel costs with the organizers of events. It was a combination travel office and lobbying organization, in other words. Not all teams were members, for instance, the British Racing Partnership (BRP) being refused membership and Ferrari not interested in membership.

Okay, that is enough, I suppose, although I wonder how the 1948 Watkins Glen Grand Prix became the “American Grand Prix.” Just asking . . .

Should Caesars Palace Grand Prix be on your bookshelf? Absolutely! I seriously doubt that other writers will have anything close to the moxie Cannon had to tackle a story like this anytime soon.

Having dissected my own reaction to the book while writing this review I think I know what bothers me: there are more dots that have yet to be connected. The story is bigger.

Las Vegas, Organized Crime and the Pinnacle of Motorsport