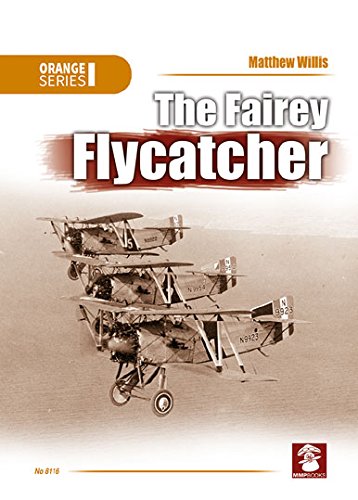 “If the RAF between the wars was the ‘world’s finest flying club’, then the Fleet Air Arm was unquestionably its yachting branch—and the Flycatcher was the perfect mount for expressing the youthful high spirits of its members.”

Cute name—awkward plane, or, as the author so politely puts it, “its odd appearance seemed endearing rather than ugly.”

This single-seat biplane was never used for the purpose for which it was developed—outright war—but remained in production for a decade and was well liked by pilots although only a modest 200 were built. Its utility lay, not least, in the fact that it could be launched, in landplane configuration (read: wheels), from a patch of real estate as small as the top of a big ship’s gun turret or, in floatplane guise, be lowered overboard and launch itself.

Followers of this publisher’s prodigious output may notice the numeral 1 on the cover, and this book is indeed the first of a new series, Orange. No matter how many examples of any one series (Blue, White, Yellow etc.) you see, it is never entirely conclusive what sets one apart from the other in terms of contents or organization. To varying degrees, all have the scale modeler in mind which often means the reader with strictly historical interests is presented with layers of detail about things that are not quite relevant to him. Absent any guidance from the publisher, and strictly extrapolating from the format of this first book in the new series one may conclude that here the approach is reversed. If you are familiar with the books by Osprey, this one has a similar flavor but a higher price point. It is illustrated with several highly detailed color profiles and b/w line art (mostly 1/48) by Chris Sandham-Bailey, a well-known name. Their captions are very specific as to paint and markings. Some of the photos are new to the record, several technical illustrations are reproduced from period manuals.

The Flycatcher is certainly a topic that has not yet been fully exhausted in the literature. Readers from the car world will recognize the name Armstrong Siddeley and it is that firm’s Jaguar series of engines that propelled the Flycatcher.

The introductory quote is representative of Willis’ breezy, clever writing style. If you recognize his name as that of the author of novels you’ll know why (his university thesis was on Joseph Conrad)! But, he also has a decade of nonfiction work in naval and aviation history (and, more peripherally, motorsports) under his belt. At any rate, this is a solid book, with a purpose and a plan, and when you’re done reading it you’ll indeed know why the Flycatcher belongs in the history books and you’ll also be up to speed on the single existing aircraft (which is actually a—once airworthy—replica).

No Bibliography or Index.