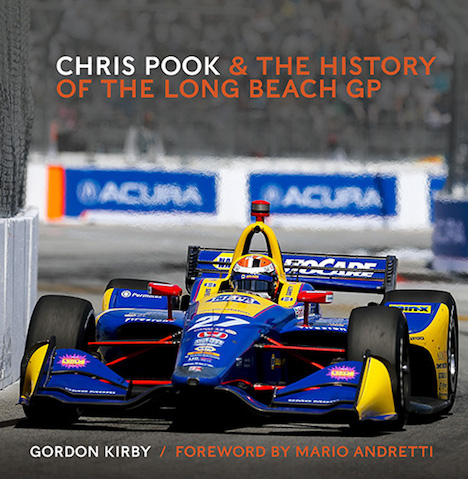 “As soon as the Coastal Commisssion approved the race and the CBS television and Toyota deals been signed, the opposition struck again. Deke Houlgate, a freelance writer for the Los Angeles Herald Examiner and the media promotion ‘flack’ for Riverside International Raceway, convinced his editors that the Long Beach GP was going to be an absolute colossal failure. Houlgate said racing cars could go into the crowd similar to the 1955 Le Mans accident in which 83 people died, and claimed that Chris was no more than a fast buck shyster who would abscond with all the admission proceeds and not pay any bills.”

The Long Beach (in California, but you knew that, right?) Grand Prix became an annual institution from its first running in 1975 until being interrupted in 2020 by the worldwide pandemic. The reality of its creation can be traced to the vision and tenacity of one man, Christopher Robin Simon Pook.

This book is Pook’s own story as well as the story of the Long Beach Grand Prix. It is told by veteran motorsport writer Gordon Kirby and published by motor racing enthusiast Racemaker Press. 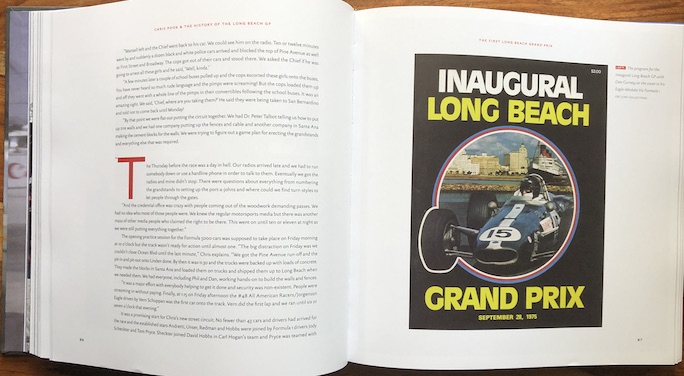 Kirby captured and wrote the story just right, with his choice of active voice and first person use of Pook’s own words. It is unclear to this reader whether Chris’ words derived from taped and transcribed interviews or whether he was an active participant in the writing. If the latter is true that makes this book really more autobiography than biography which is how the publisher’s promotional materials describe it.

Intertwined with telling Pook’s story, the narrative is also the definitive history of the Long Beach Grand Prix. Included are appendices recording all race results 1975–2019 along with diagrams of the various track configurations. The first GP featured Formula 5000 cars. The second through ninth years featured Formula 1, followed by CART in 1984 and then, onto this day, Indy cars. Thus the Long Beach April running has the distinction of being the second-best fan-supported and -attended Indy car race—second only to the Indianapolis 500 in May. 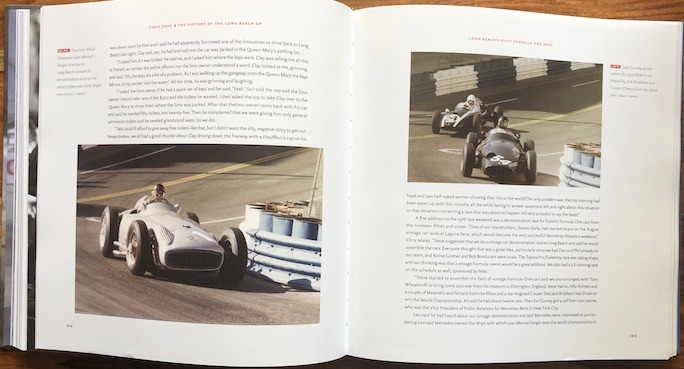 Not something you would have seen often in the US: (l) Fangio and a Silver Arrow.

The book opens in England, Pook’s country of birth. Throughout his childhood he demonstrated a competitive spirit coupled with the tenacity to succeed at whatever task or challenge he’d set for himself. After graduating from the Sorbonne, Pook, age 22, set sail for America as he’d decided that he had the best possible chances of “making it” in America, with Australia as his fallback.

Pook’s entrepreneurial energies quickly bubbled to the surface. The first company he established was soon bought out by the bigger one in the same travel and tourist industry. By now, thoroughly an Angeleno, Pook acted on an inspiration leading, in 1974, to establishing the Long Beach GP.

Details of the challenges encountered, met head-on, and dealt with over the ensuing years will ring true with any business person who has ever attempted a new venture. There are rules and regulations to learn and adhere to ranging from local ordinances to city and state statutes. Additionally, Pook’s venture also had to comply with the ever-changing various race-sanctioning organization’s requirements. 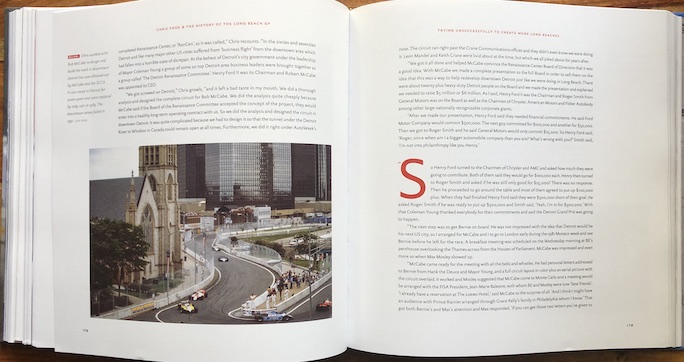 Throughout the book Pook repeatedly iterates it all would have been more difficult—perhaps not even do-able—had it not been for the early support and ongoing enthusiastic participation of one Daniel Sexton Gurney. And Pook also pays tribute and describes the key men and women who formed the Long Beach GP’s executive paid staff with a very special acknowledgement of the contributions of the Committee of 300. That Committee is an all-volunteer “task force” who, year after year, were and have been a major reason it is possible for an event of this magnitude to be successfully held.

There is a still greater depth and breadth to the book than the stories of a man or a race event for it is also very much about the real nuts-and-bolts surrounding the business and politics of professional auto racing. Whether he meant to or not, Pook became deeply involved in the overall world of professional open wheel racing, subsequently becoming a force in that arena of the racing business. It resulted into his becoming deeply involved in the trials and tribulations of two challenging and, as he and Kirby describe them “two miserable years”, 2002–03, as Pook attempted to keep together and viable the faltering CART organization.

Racemaker produces handsome books. Page design is always attractive and use of quality paper is part of the printing process with all well bound between hard covers. The owner of Racemaker Press, Joe Freeman, wrote this book’s Preface and his very first sentence says in part, “As a historian and publisher who has labored for a number of years to preserve the history of American racing.…” His words make it all the more puzzling why, oh why, a book produced by an historian, contains no Index and why careful attention wasn’t paid to accurately proofing the text and captions on the pages before committing them to the presses for printing. It’s a superbly written and presented story and deserves, since a buyer is being asked to pay just shy of a C-note for it, to be as word perfect as is humanly possible.

Appendices but no Index. Foreword by Mario Andretti.

The Cellini of Chrome »
« The Victorian Steam Locomotive: Its Design and Development 1804–1879