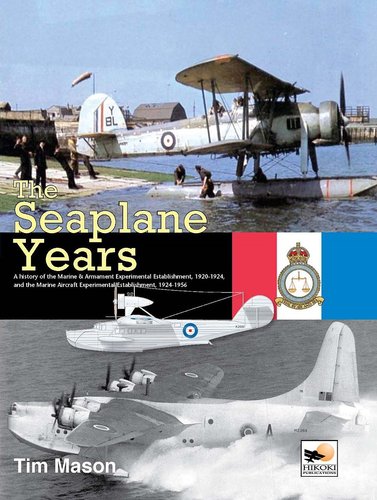 Planes that live on the water have their own special requirements and, as this book shows, colorful history. Conceptually, this book is similar to, and related to, Mason’s other books about flight testing at Martlesham Heath and Boscombe Down where all land- and carrier-based airplanes for the various branches of the British military services underwent acceptance testing. This new book is devoted to seaplanes and their 1920–1956 test facility, the Marine & Armament Experimental Establishment (later the Marine Aircraft Experimental Establishment).

While similar in execution and presentation, the seaplane book has a different pace, or tone, inasmuch as there is quite a bit more narrative. This is a most excellent approach, considering that seaplanes and their environment and operational parameters are much less widely known, but it is probably only the happy byproduct of the fact that the MAEE kept much poorer records than its landplane counterpart. As Mason puts it, ever so politely, “Disparity in the availability of primary documents concerning the two Establishments has adversely affected the writing of this book.”

Aside from its aircraft descriptions, something that distinguishes this book in particular is the excellent presentation of both the airmanship and the seamanship a seaplane crew had to master, and even such peculiarities as how to service a seaplane on the water or how to get it on land. It also touches upon the complex issues of how a plane behaves on the constantly changing surface that is water, how it “unsticks” itself during take-off, how it lands without flipping over, and a dozen other things you’d never think about—unless you have a seaplane rating. In that regard, while the book does talk about accidents, it says nothing about a problem unique to water landing: difficult depth perception.

The Table of Contents is rather too brief and gives no inkling that the book even covers items like the above. It merely lists the five chapters—three of which deal with the three sites the MAEE occupied and two with flying boats and floatplanes—and the seven Appendices. The physical arrangements, inner workings, and particular capabilities/specialties of each of the three sites are discussed, as are testing protocols and work/research conducted. Special consideration is given to a point near and dear to British hearts, the High Speed Flight and the Schneider Trophy.

The meat of the book is the aircraft descriptions. Flying boats (which use their boat-like hulls for buoyancy) are treated separately from floatplanes (which use floats or pontoons—often detachable—for flotation) but no distinction is made between them and amphibians (which, having auxiliary wheels, can land on both water and land). The last entry fits neither category, a Cierva Hoverfly helicopter which is probably only shown because the MAEE did once use it.

The treatment is in more or less chronological order, allowing for the inevitable overlap in concurrent developments. The floatplane coverage ends in 1947, the flying boats go up to the majestic Saunders-Roe Princess of the mid 1950s. Each section has at the end a table of Performance Figures.

The many excellent b/w photos are thoroughly captioned and largely new to the record; they are augmented by 22 color profiles by David Howley that, most usefully, state the scale which makes for good comparisons. All float planes are, for instance, are uniformly in 1/72 scale; modelers will rejoice.

Appended are lists of senior staff, an honor roll of personnel killed while testing (with date and aircraft but no details as to the incident), the German seaplanes of the MAEE, a comparison of MAEE and AAEE flying hours 1927–1937, and a Glossary and Abbreviations. A Bibliography points to related books, but only British ones. The Index is very well subdivided (even listing ships).

As all Hikoki books, this one is properly printed and bound (even a rounded spine!), on good paper, and in all respects satisfying.

Inside the Paddock: Racing Car Transporters at Work »
« II PY