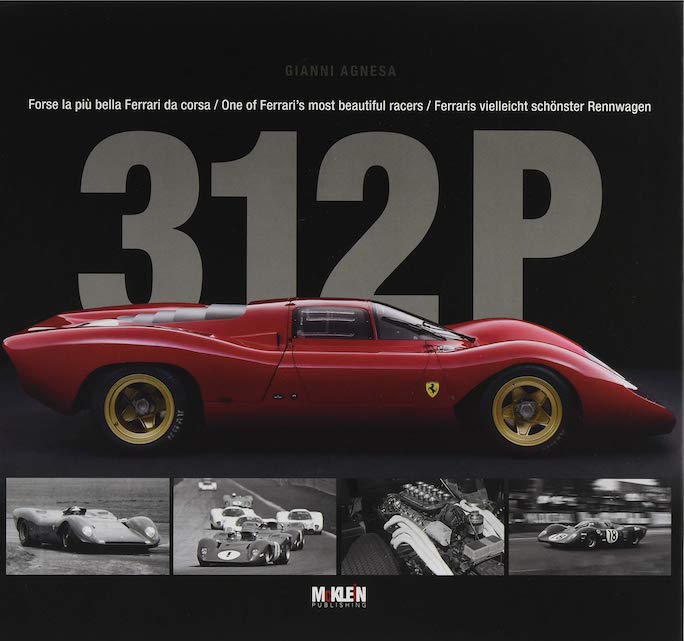 “My wife, surprised by my diligence, asked me if this work could really interest anyone apart from me. Quite honestly, I don’t know—but I think so.”

(Italian, English, German) Why, yes, there will most assuredly be interest in this book, among those who know enough about Ferrari to know that there hasn’t been much written about this race car.

The reasons for this are not all that clear as it accomplished much with little and finished 75% of the events in which it was entered. That only three were ever built (1969–71) should only add to its appeal as it is quite rare to see one in the flesh nowadays. Incidentally, this book’s launch was slated for 2019 but instead was postponed to 2020, at Retromobile—where it just so happened that one of the only two surviving 312P’s was on display at that very same time.

Take a look at the cover. There really isn’t much to argue about whether this was a beautiful car, especially compared to the Winged Wonders of the day, be it in F1, Sports Cars, or Can-AM. The German version of the subtitle hedges its bets a bit more than the English one, calling it “perhaps” one of Ferrari’s most beautiful racers. This is an exceedingly minor difference but many such examples can be found throughout this trilingual book and sometimes they do amount to more than just trivia. One example: where the Italian original uses protagoniste, and the English translation protagonists, it is the German version that gets it best: Gegner, meaning opponents. So, no matter your primary language, scan the other ones too.

The book begins with an interview of the designer of the 312 P, Giacomo Caliri. He helped author Agnesa, a civil engineer by training, get his head around race car aerodynamics and engineering. Agnesa first beheld a 312 P as a 13-year-old, on a magazine cover, and 50 years later it moves him still, enough to invest a good decade into writing this book.

Chassis 0872, gloriously restored in Switzerland by Edi Wyss who was once Denny Hulme’s F1 mechanic! McKlein just published a book about him, The Swiss Wiz: Edi Wyss, Ein Leben mit Renn- und Sportwagen (so far only in German, reviewed elsewhere on this site).

Other principal characters in the 312 P story had input into the book as well, not least the very man who ran Ferrari’s prototype program at the time, Franco Gozzi, as well as several of the nine competition drivers. Another person who like Agnesa clapped eyes on a 312 P as a young man was Reinhard Klein, before he became the big-time racing photographer and, coming full circle, the publisher of this great book. From the oldest material (many previously unseen period photos) to the newest (the restoration of #0872 that was reintroduced to the world at Retromobile) this book adds to the body of knowledge in a significant way and covers all aspects of the model’s development and race history, as well as peripheral matters such as the related but quite different 512S and also the 312 that became a one-off 512 Special (#0868, below). Besides, it is a beautiful book, with crisp design and the high production values of a McKlein book, typical for this publisher but never to be taken for granted.

This wedge body shape foreshadowed the 512S.
Here is another example of the English translator simply not making ANY effort and slavishly following the Italian original, perhaps without even understanding the cultural references. The Italian text talks about the “fantastic prototypes of Michel Vaillant” and then refers to “inspiration derived from that master of the bande dessinée.” The English version uses these exact words, including bande dessinée. What English-speaker will know what that is? It literally means drawn strip . . . as in comic strip. Only the German translator did right by his target audience here. And that fellow Michel Vaillant? He was a race car-driving comic book hero in the 1960s.

Appended are specs, race results, side views of the various body styles, and scale models (including a super-detailed, downloadable 3D model of #0872 professionally made of quad polygons). Bibliography. No Index.

Secret Wings of World War II »
« Once Upon a Time in Hollywood, A Novel