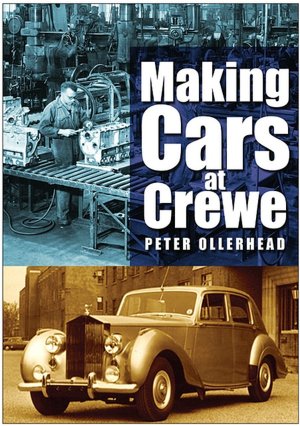 This is not a book about the nuts and bolts or gear ratios and color schemes of the cars, but rather about where and how and by whom the cars were built at Rolls-Royce’s factory in Crewe, England, from its inception in 1939 to the split of the marques between VW (Bentley) and BMW (Rolls-Royce). On August 30, 2002, the last Crewe-built Rolls-Royce rolled off the production line, ending a long and meaningful chapter in British industrial history.

There are a number of eminently useful books that tell this story from the corporate point of view, both by outside historians and Rolls-Royce insiders. Peter Ollerhead, who was an apprentice (1952–1958) and then a worker (until the mid ‘60s) at Rolls-Royce Motor Cars, goes a different way and tells the story from the shop floor perspective. This obviously adds a different perspective—which is both good and bad. Good, because how things look to the workers is often quite different from how their bosses or outsiders see the world. Bad, well, possibly bad, because workers normally can’t possibly be privy to the sort of information that informs company management’s decision-making. For readers who are already well read in matters of Rolls-Royce history this means that events they have previously read about may here be presented with a distinctly different slant.

Be that as it may, Ollerhead’s angle adds quite a bit of heretofore unknown texture to the reams of minutia we already know about the cars per se and the “official” corporate history of Rolls-Royce. Ollerhead, incidentally, is a second-generation Rolls-Royce employee and even grew up in one of the council houses built by Rolls-Royce. A resident of Crewe, where he now owns a bookstore, he is also a local historian and it is this combination of factors that enables him to embed his own and other’s personal Rolls-Royce stories into the wider context of Rolls-Royce’s place in Crewe.

The material is culled from interviews with ex-employees, archival material from the marque club in England and its affiliates, and certain unpublished papers. Starting with a history of Crewe from the beginning of the railway age and Rolls-Royce’s reasons for moving there, the book examines such aspects as life at the factory, work processes, working conditions, unions, wartime bombings, strikes, morale, the transition from the production of Merlin aero engine to motorcars, the Welfare Amenities Society, etc.

Cars are only referenced peripherally, with the exception of the somewhat more extensive remarks about the Silver Dawn, Silver Cloud, and Silver Shadow models. There are a few errors in the photo captions, but they seem to be layout snafus rather than all-out mistakes by the author (cf. a photo in the Silver Cloud section is described as a “1964 SC III” but shows an early Silver Shadow, the model that succeeded the Cloud III).