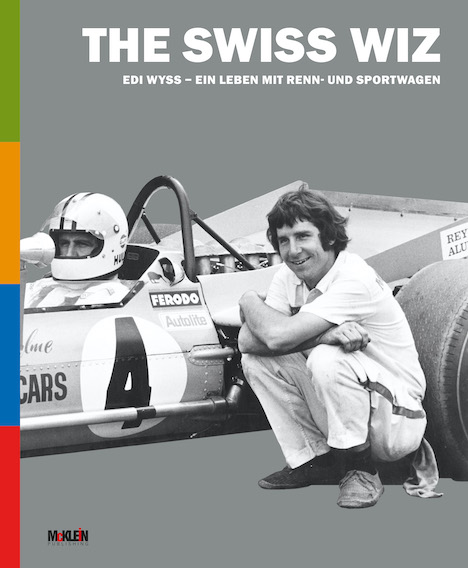 (German) While peripheral to what this book is about, here is a point worth making right at the start: aside from facts and figures and many excellent photos this book (A Life With Racing and Sports Cars) will give you a glimpse of something outside normal experience: at the highest level of the collector car world, where gaining a quarter-point lead at a concours can mean spending an extra five figures, restorers help each other out in an emergency. (Owners, well, that’s a different kettle of fish.) Why? Respect. Even from competitors. Playing at that level means you’re a big fish in a very small bowl, and mastery of craft is currency. That, too, is how Eduard Wyss, who is one of those big fish, found the fellow to whom he would propose succeeding him as the head of Edi Wyss Engineering in Switzerland. 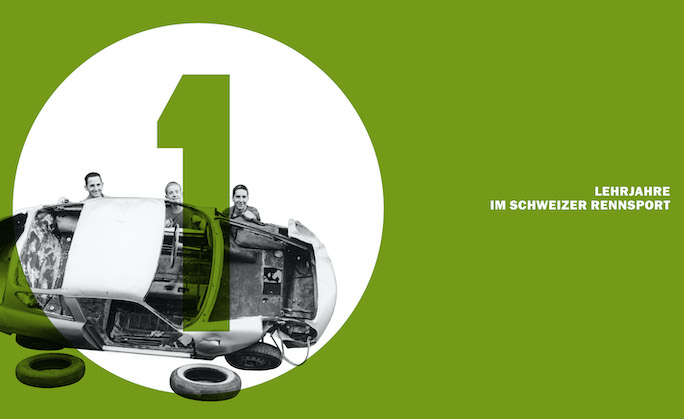 The Swiss Wiz family—father, Edi, brother Georges. This was Edi’s first car—and he still has it, although it now is reduced to being a donor car for Abarth parts. 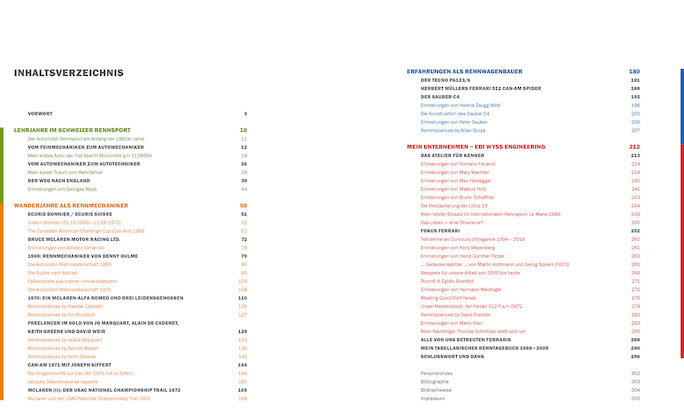 The four colors used in the Table of Contents (also on the spine and then on certain features within the respective sections) are not random but represent four phases in Wyss’ life: green for the hope for a professional career during his apprenticeship, orange for the period of “higher learning” at McLaren, blue for his time as race car builder, and red for—what else—Ferrari.

Switzerland has four national languages; alas English is not among them. Although this book is already in its second German edition, and won one of the three Honorary Awards at the 2021 Motorworld Buchpreis in the Biography category, there’s probably no English version in the cards. We always say that a photo-intensive book speaks to even those who cannot read the language in which it was written. This is true here too—there’s hardly a paragraph without a name or chassis or place you wouldn’t recognize. 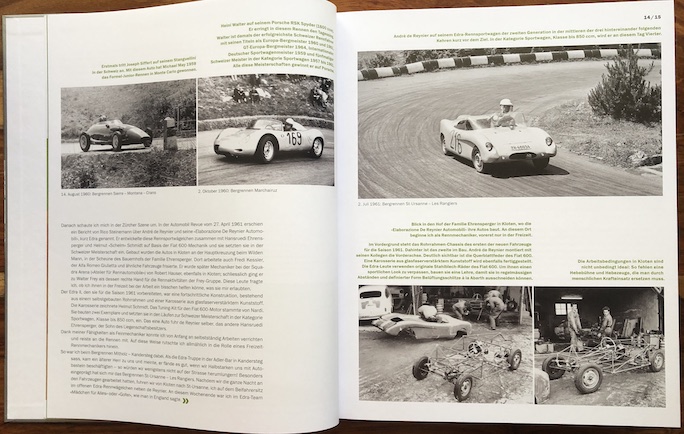 You’ve probably never seen an Edra. If you can tell which of these cars are the RSK and the Stanguellini, what’s left must be the one by Elaborazione De Reynier Automobili. 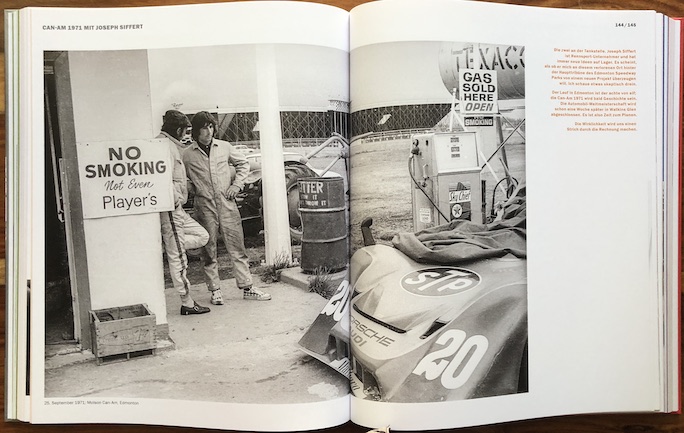 Throughout, the captions are full of detail. What this one does not say is to swivel your eyeballs to the left of the image and read the sign—and chuckle.

Especially Wyss’ early years as a journeyman race mechanic name-check pretty much anything and everything on the international scene. Sometimes, though, even the German version doesn’t go beyond the sort of peripheral casual comment that just begs the proverbial follow-up question, for instance Wyss, then wrenching for Joakim Bonnier, describing Jim Hall’s Can-Am car (p. 68) as having an automatic transmission “that no one could really figure out.” It’s not critical, really, to the Wyss story anyway but it does make you wonder what that’s about. This remark is prompted by the recognition that this book didn’t start as a soup-to-nuts monograph but as a series of sort of free-form interviews by and for the archival arm of the Swiss Car Register, thanks to a chance meeting between Wyss and SCR secretary Christoph Ditzler. Among the SCR’s low-visibility/high-impact activities is the preservation of important source material for future generations so the Wyss interviews were initially intended for internal use. When Ditzler realized there was a bigger story here and a reluctant Wyss saw himself that race mechanics’ reminiscences were finding a receptive audience, a full-fledged book was the next logical step—a development furthered by Wyss just having had a favorable experience working with a publisher who was bringing out a book on the 312P Ferrari, which included the chassis Wyss had brought back to life. “Restored” is too small a word; the motor, for instance was custom-made from the ground up from newly made castings. 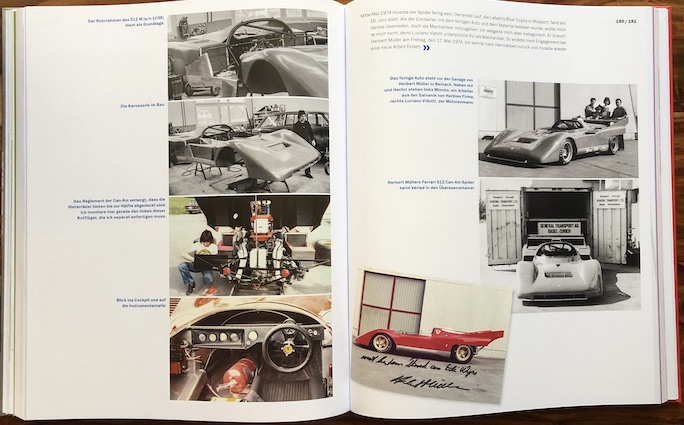 Wyss may refer to himself as a race mechanic all day long but that last sentence signifies the depth of his skill and his standing in the collector car world, most especially on the Ferrari scene. Born in 1942, Wyss was witness to momentous technical innovations in F1 and Can-Am but also an era in which what would become 7- and 8-figure cars were merely so much scrap metal. An example, and also another example of one of those tantalizing casual remarks in the book that will make readers wish for more detail: a Ferrari 250LM chassis after a crash in 1965 getting the body of a Porsche Carrera 6! Then: normal. Today: unthinkable. That the book is able to give their serial numbers is remarkable because Wyss says he only kept a general, daily log. The book ends with a 4-page table (dates, race, car/serial no., driver, team, result) of all his work on race cars from 1968 to 2009; see below. Another one lists all the Ferraris his firm has worked on, and throughout the main text are other tables and lists of race results or all the Wyss Engineering cars at concours etc. 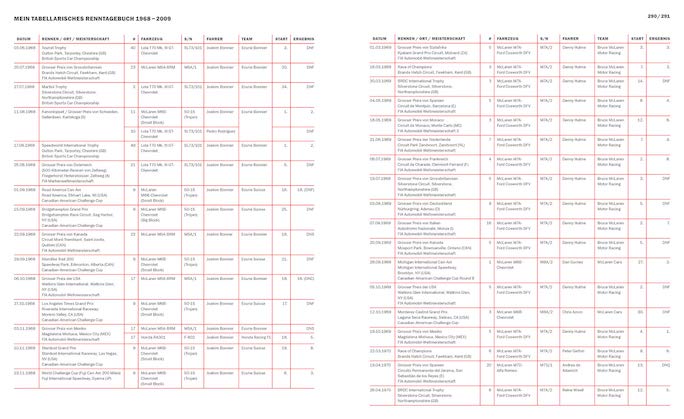 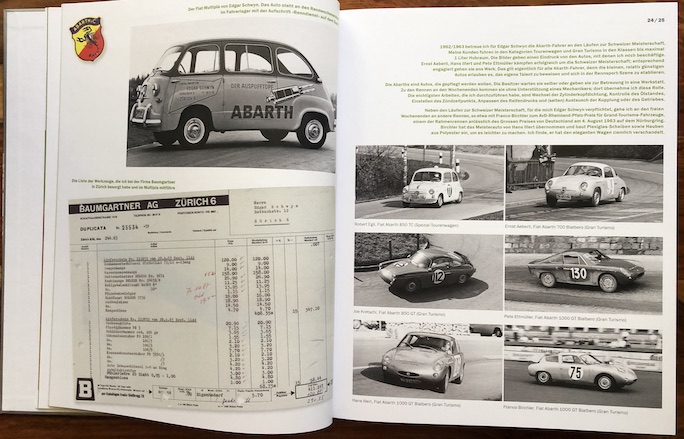 Surprise: with all the exotics that went through Wyss’ hands as broken cars that he could have snapped up for a song and restored himself he never wavered from his first love for Abarths of all stripes. Even in retirement he restores his own cars to concours level and occasional use. 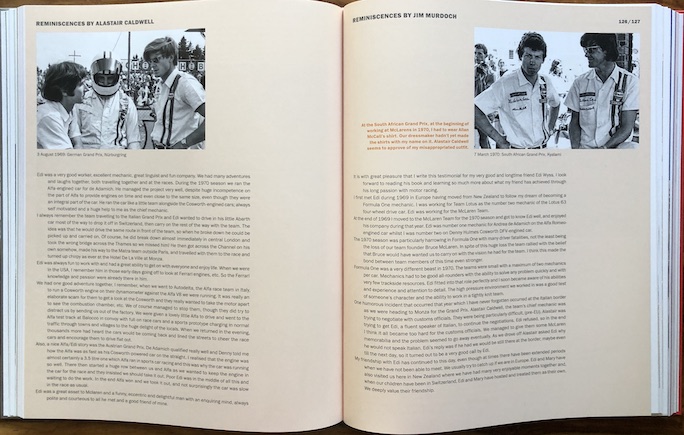 An example of the many reminiscences contributed by people who worked with (here Alastair Caldwell and Jim Murdoch) or for Wyss or know him from other walks of life.

Divided into four principal sections representing distinct phases in Wyss’ life, this autobiography goes from childhood to retirement and actually a bit beyond. If you’ve only ever seen Wyss Engineering referenced in magazine articles or auction catalogs you’ll now come to appreciate just what a force he was and his firm will continue to be. Wyss would be the first to deflect attention from himself and talk about teamwork instead, so let’s not forget to point out that this excellent book is a McKlein production. Their reputation for picking worthy topics and then making truly fine and intelligent books is again fully on display here. 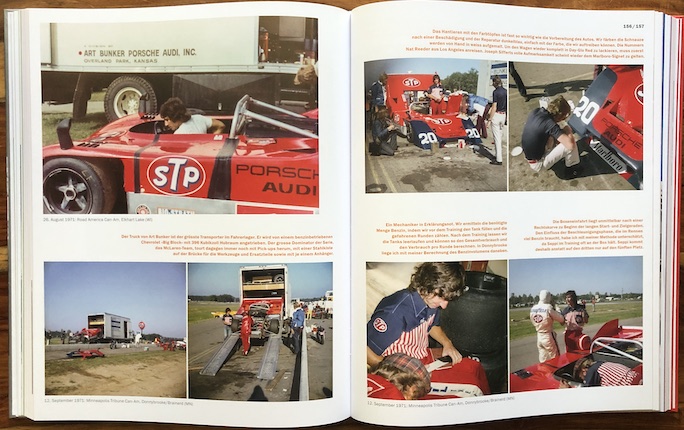 This is just one of several back-to-back pages about Can-Am at Donnybrooke.