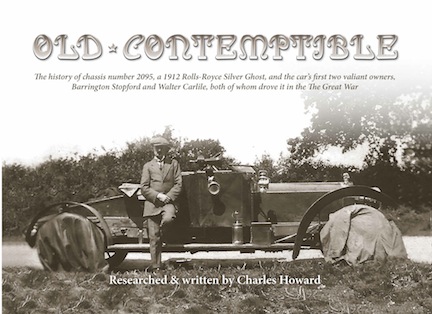 The long subtitle says it all: “The history of chassis number 2095, a 1912 Rolls-Royce Silver Ghost, and the car’s first two valiant owners, Barrington Stopford and Walter Carlile, both of whom drove it in The Great War.”

“Old Contemptible” may not sound like a term of endearment but this car did well by its owners and also by itself, piling up over a half a million miles by 1943. Even for a vintage Rolls-Royce this is a stout number.

A number of factors made the always laborious task of fully ferreting out a car’s history especially worthwhile in this case. It was, for instance, not entirely by accident—although these things can never really be planned reliably—that this car was finishing a comprehensive restoration in the same year it turned a hundred years old. It was also shown at Pebble Beach that year, as display-only, precisely because there was no way of knowing if the car would be finished in time—and not just bolted together but totally roadworthy so as to partake in the 70-mile tour prior to the concours, successful participation in which will be used as a tie breaker in the case of a tied concours judging score.

Moreover, the current owner, Gloucestershire car dealer extraordinaire Charles Howard is the very embodiment of the sort of mindful connoisseur who sees himself as a custodian more than an owner. Fully documenting a car’s history is simply part of what a custodian owes his car and posterity. Thankfully, this car is a Rolls-Royce which means that it is well documented right from the factory. The company, in fact, used 2095 as a demonstrator for the first six months and in the hands of its leading demonstrator, Percy Northey, this car would have been seen and used by scores of journalists and prospective buyers. From order and build sheets to test results and reams of correspondence, everything is, to this day, preserved in the archives of the Hunt House, headquarters of the Rolls-Royce Enthusiasts’ Club in the UK.

Not all of 2095’s previous owners were as meticulous as Howard is and he had to go to some lengths to gather material about the car and then have his findings properly vetted and correlated with other data points. Initially, the purpose of this exercise was to create a file that would henceforth stay with the car so that the information would never become separated from it again. But that would mean only very few people would ever learn of this car’s unusual wartime exploits and so this small book was created. Such publications are entirely common in the world of vintage and/or important Rolls-Royces and really are not to be seen as self-absorbed navel-gazing but as important, if sometimes peripheral, pieces of the puzzle that is motoring history. Rolls-Royces weren’t owned by just “anybody” and therefore many of them have stories worth knowing.

This is a book review, not a book report so we’re not going to retell the 2095 story here except to point out that it is a misconception that every buyer of a new Rolls-Royce is made of money. The first private owner of 2095 was car-mad 23-year-old former naval officer Barrington George Dashwood Stopford who, as the correspondence shows, seems to have sunk all his capital into the purchase of this car, even asking Rolls-Royce to help him sell his Vauxhall! But, he was also a patriot and came from a family of military men and when war broke out, he signed up as a civilian volunteer motor driver supplying his own car and strove mightily to get into the Royal Navy Armoured Car Division.

You see, then, 2095 has a colorful history—and this book records a good deal of it along with a few pages dealing with Howard’s acquisition of the car, the restoration, and the people involved in it. That Howard, who is in his mid-seventies, is mindful that the time to pass the baton will come some day is evident in the fact that the book’s back cover already refers to him as the “former” owner. So, if you read the book and fall in love with this piece of history, 1912 Silver Ghost 2095 might just be for sale—if you are found to be a worthy custodian. There will be a test.

Being a privately written and produced book does mean it is has some glitches in terms of bookmaking finesse and proofreading but it is printed very nicely by a perfectly respectable outfit, the Lavenham Press (which did some of the early books of the then newly revived Dalton Watson Fine Books). We say it all the time: no one gets rich doing these books; they are labors of love. Compared to other books of this sort, this one is actually quite a good value.

The Story of the Boeing Company »
« James Garner’s Motoring Life