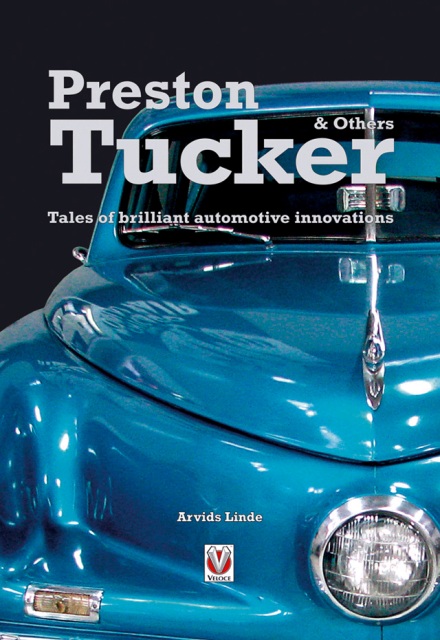 The book’s basic premise is true enough: at all times and in all fields there are those who think outside the box. The transportation sector is no exception. More often than not they are unlauded, misunderstood, and unrewarded in their own time. Worse, they may be forgotten altogether—hence a book like this.

What drew author Linde, an Estonian automotive engineer now based in the UK, to this topic is not explained. It may be a certain professional kinship with the innovators because Linde has a specific interest in the still non-mainstream field of electric cars in particular and alternative transport in general. In 2010 he published Electric Cars – The Future is Now (Veloce, ISBN 978-1-845843-10-6), edits an independent green motoring blog, and is involved in various green projects from art to architecture. So, he can relate to his forebears.

In lieu of being provided with background that establishes the author’s competence, the reader is forced to make inferences about it, from the scope and from the lucidity of the arguments he presents. By that yardstick, we have reservations. Now, no one is more motivated than a SpeedReaders reviewer to trawl for the good in a book but the several reviewers who each looked at different subject areas all found a certain measure of superficiality or lack of nuance. We shall purposely cite a seemingly trivial example because its very triviality makes our argument easily verifiable by the reader without requiring specialized car history knowledge. All you need is—a map: The biographies retold here cover several countries and several eras; more than a reader may already be familiar with. This, then, requires of the reader a measure of trust that the author knows the way. Consider, then, the opening of the first chapter in which the author imagines a day in the life of John DeLorean: “ . . . Park Avenue snaked like an unruly mountain river through Manhattan . . .” Aside from the tortured prose let’s just assume that mountain rivers do “snake.” (Surely other kinds of river too, so why single out mountain rivers?) But Park Avenue most certainly does not; through Manhattan it is straight as an arrow—not surprisingly because originally, when it was known as Fourth Ave., it carried the tracks of the New York & Harlem Railroad beginning in the 1830s. Whatever snaking it does happens way north of Manhattan. Ergo, if something this easy to research is not completely accurate, how much faith do you have in the author’s work when he talks about things you cannot easily check yourself? This may sound harsh, but putting a book out into the world is serious business and all hands need to be on deck. (And send that memo to the proofreader who allowed Gabriel Voisin’s name to be misspelled in every single running head.)

While we are letting air out of the balloon, one more item begs to be questioned. The back cover, and some other book reviews, say the book is “lavishly illustrated.” Is this in reference to quality? size? or selection? The paper is normal, matte stock; the smallest photo is 2 x 2″ and the largest 5 x 5″ in a book that is only 6 x 9″; the selection is appropriate and interesting but nothing fundamentally new to the record. Either we are blind or the other writers have mislaid their thesaurus or everyone is simply copying everyone else.

Divided into three principal parts, the book first presents eight individuals (DeLorean, Tucker, Wankel, Voisin, Borgward, Wiegert, Antonov, Negre) in detail in separate chapters making up about half the book. Why these folks and why this order is not explained. The level of magnification in each bio is not uniform in terms of biographical background and technical detail. Especially the DeLorean and Tucker chapters resort to fictitious dialog (including stage direction, cf.: “. . . she whispered rapturously.” [p. 10]). While the precious space devoted to this obviously takes away from a more fact-driven coverage, it’s probably intended to make the protagonists relatable.

The second half of the book is as jumbled as its title “Times and Countries” would imply and cannot be adequately summarized here. Facel Vega enthusiasts will find quite a bit about that car here but absolutely nothing about its creator Jean Daninos’ other work. One thing that is relatively uncommon in Western literature, and probably related to Linde’s Eastern European background, is his—welcome!—coverage of modern-day Russian projects.

The final part covers in a few pages the great inventions of motoring history (no mention of steam) insofar as electric cars (no mention of, cf., Porsche) and internal combustion are concerned. Index.

This book is also Veloce’s first eBook, at a reduced price of $19.99/£14.99. Initially it will be only available for Apple devices and is downloadable via the iBooks app which also allows sample pages to be viewed.

We would be remiss if we didn’t point the reader to a supremely excellent book along similar lines, Automobile Design:  Twelve Great Designers and Their Work.

London’s Airports: Useful Information on Heathrow, Gatwick, Luton, Stansted and City »
« Something Quite Exceptional: Hugh Easton and the Battle of Britain Memorial Window for Rolls-Royce