Was there really a time when used Ferraris were (relatively) cheap enough that even young people could afford them, use them as daily drivers, even race them without qualms? Yes! And Niles was the enabler—thanks to him so many Ferraris found their way to SoCal that they were easier to find there than in Italy.

Not just another catch-all generic photo book! This is a story, told in period photos, of mostly west coast racing seen from the perspective of someone who participated fielding his own cars and for-hire drivers.

While usually mentioned in connection with Ferrari, NART campaigned other marques as well, all the way up to F1. What do they have to show for four decades of toil and trouble?

Among this race driver’s trophies is an Emmy for sports writing and this anthology is a good testament to Posey’s abilities behind the pen. Now in his seventies, he’s been around, literally and figuratively. 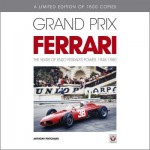 Not to be confused with an earlier book of the same title and by the same author, this posthumously published tome is an entirely revamped take on a subject that, if anything, has become more complex since then.