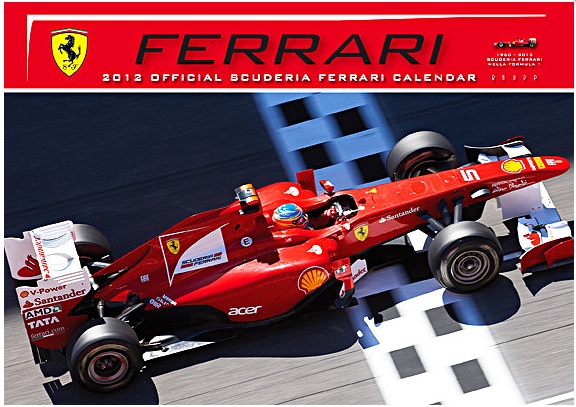 Highlights from Ferrari’s most recent Formula 1 season, captured in images by three of the big names in motorsports photography. There’s really not much more that needs to be said, but there is always a useful bit of background to further enlighten the viewer.

First of all the caveat that we don’t normally review calendars here. The reason this one is an exception is that, like Günther Raupp’s “big” Myth calendar, this one too is not a calendar in the conventional sense. It is a calendar in the same way a Movado writstwatch with the classic museum dial (the one without the numerals) tells time: it does that, but you have to work at it. This calendar just has one line of numbers representing the days of the month at the bottom, and the name of the month (the Myth calendar doesn’t even do that). In fact, people who actually need a calendar may find this rather useless. So, really, the whole calendar bit is just an excuse to gather up some splendid photos and make you “waste” time looking at them. Make that examining them. Thanks to the large size there is much to discover here, which leads to point two.

There are all sorts of Ferrari calendars, and in various price ranges. Some may even be “licensed” inasmuch as they are allowed to use the Ferrari logo. But if you go directly to the (prancing) horse’s mouth, this is the only one you’ll be offered. This is the official Ferrari calendar. So you, dear reader, should ask “Why”?

Part of the answer comes from the Myth calendar. Its photographer is the one who designs and edits this F1 calendar. Having done the Myth for now 28 tears, he has a long relationship with Ferrari who trust his artistry to capture their iconic cars’ essence. The 13 images here (counting the cover, which, incidentally is not identified and shows a Schlegelmilch shot of Fernando Alonso at his home GP in Spain) are culled from 500–700 photos Raupp evaluates. He also selects the photographers: Rainer Schlegelmilch (7 photos) who will celebrate his fiftieth year as a motorsports photographer in 2012; Paul-Henri Cahier (2), famous son of famous photographer father Bernard; and the young Brit, Darren Heath (4). Each of them contributes innumerable photos to all sorts of publications throughout a year. 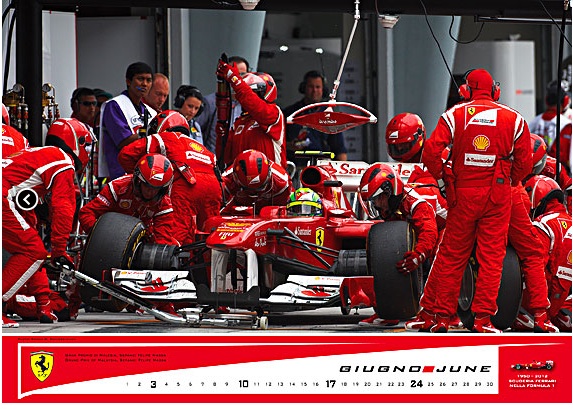 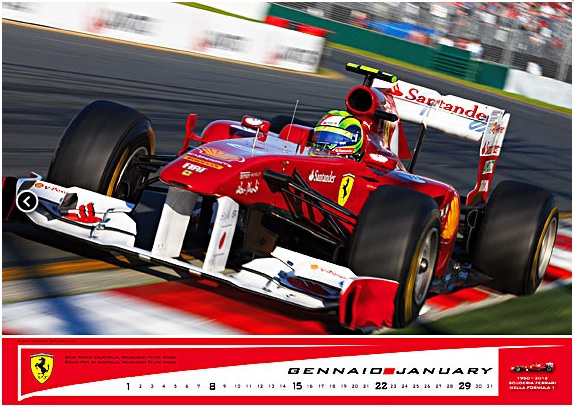 In case you don’t realize it, Ferrari has been in F1 since the beginning and is, statistically, the sport’s most successful team in history with a record 15 drivers’ and 16 constructors’  championships. Racing enthusiasts will know all about “team orders” (and Ferrari has committed a number of rather egregious trespasses in this regard). Looking at these images attentively will raise the question whether Ferrari had team orders for Raupp: is Alonso shown more often (7 times) than teammate Massa (5 times) because Alonso is the team’s numero uno driver and has more championship points? Do the tires in almost all photos look virginally unblistered because Ferrari has technical reasons not to show the world shredded tires which arguably look much more dramatic? Is the top element of the rear wing closed in most shots—despite the new DRS zones that were invented to facilitate overtaking by the driver manually opening the wing—so that the sponsor logo is better visible? No, Raupp says categorically, Ferrari leaves creative control to him. It is his choice alone. (And, unless you are a conspiracy theorist, why should artistic choices not be able to coexist peacefully with looking at the world through a client’s eyes?)

These images are obviously much larger than those in a book, 23˝ x 16˝ (60 x 42 cm). In order for photos to turn out well at this size you do have to have serious equipment, and that, coupled with the skilled photographer’s eye for the moment, makes for revealing, impactful imagery. If you know how to look, you will see micro detail you wouldn’t see at a smaller size. Take Gennaio (January) as an example: the script on the right front wing is legible, the left one is not. The car is in a left turn, straddling the curb. Meaning? Gearheads, you figure it out.

Needless to say, the photos are printed on high-quality, glossy art paper (150 g) and the reproduction is state of the art. Cleverly, the month of October comes with a sticker reminding you to order next year’s calendar. All 12 images are shown, in small size, on the back cover

They Started in MGs: Profiles of Sports Car Racers of the 1950s »
« Ferrari Myth 2012: The Official Ferrari Calendar