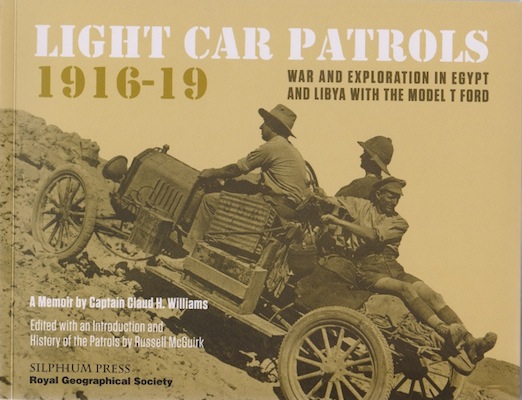 This is a book I would never have heard of if the manuscript had not come my way in connection with the Michael Sedgwick Memorial Trust. It features the previously unpublished account by Captain Williams of his service with the light car patrols in Egypt and Libya during the latter part of World War I. It is a chronicle of desert exploration carried out by a very small British force using Model T Fords. In his introduction the editor tells how over 19,000 Model T Fords were used during the war with some 1,000 ending up in Egypt. He says “the Rolls-Royce [armoured cars] were unbeatable where the ground was flat and hard but where the surface conditions were bad due to mud, sand or rock- and even swamp . . . the Fords were more reliable.” It’s high ground clearance helped as well. It was the simplicity of the Ford that caused it to be chosen for these desert patrols where maintenance was likely to be minimal.

Apparently spare parts were at a premium as after the sinking of two ships, HMT Titian and HMT Waterfels, nearly 500 cases of spares were lost.

This is a wonderful account of running such cars in terrible conditions and on awful road surfaces and hillside escarpments.

What makes this so interesting is the main part of the book, Claud Williams’ memoirs. They were written down immediately after the war but have lain unpublished until now. You are getting the story from someone who was there. It’s a fascinating account of using cars in the most terrible of conditions; some of the repairs they had to carry out were amazing.

Besides the cars the book is a descriptive account of the places, the people, and the very varied climate. With WW I about to be commemorated over the next few years, this book has come to remind us of a part of the war that, I   suspect, many of us know little.

There are a surprising number of very good period photographs of the cars, people and landscapes, some reproduced in a sort of yellow desert sepia which in my opinion has not improved their clarity.